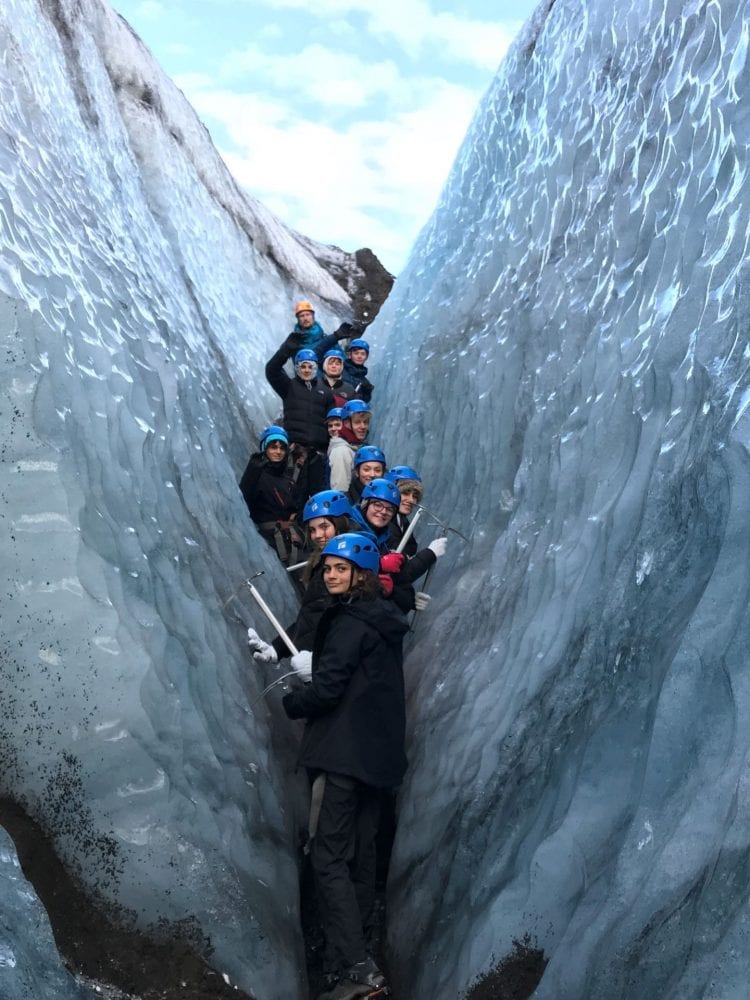 During the Autumn half term, a group of 57 year 11 Geographers had the amazing opportunity to go on a ge-ographically filled tour of Iceland’s south coast to see its many amazing sights, giving us also fascinating in-formation and insights into the GCSE modules we are studying.

It was an unusually early start but, nevertheless, in good spirts we set off to Luton airport. We caught the 7:30 EasyJet flight to Iceland’s Keflavik International Airport. After the 3 hours of catching up on lost sleep, we landed in a very different airport from we had taken off from. We were immediately attracted to Iceland’s unique landscape with its flat and empty plains of lava fields; however on the horizon, there were great glaci-ers and snow caped mountains. Stopping at a supermarket we were quick to realise the expense of items and to try to figure out the unusual currency in Iceland. Once stocked up on snacks, we made our way to the first sight of the trip. 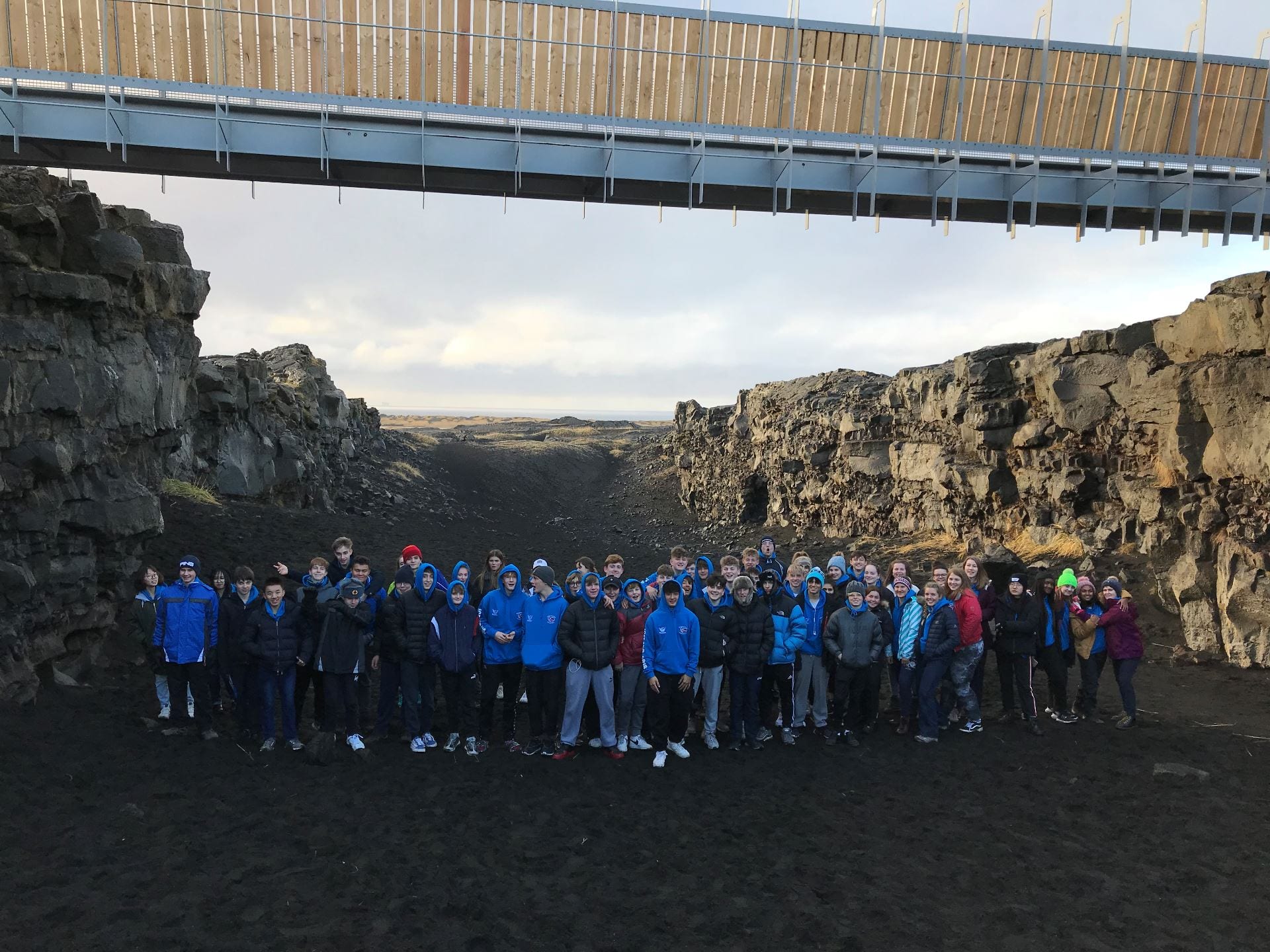 The drive on the way took us past lava fields and crater rows. We arrived at the ‘Bridge Between Continents’. This bridge stretched between the Eurasian Plate and the American Plate which are slowly moving apart every year. The gap in between is widely acknowledged as the Mid-Atlantic Ridge. Crossing the bridge is a way to see the amazing effects of continental drift. After group photos, the group moved on to visit a few classic Ice-landic geographic sights such as the steaming geothermic holes and the coast with its dark tall cliffs looking out to sea. 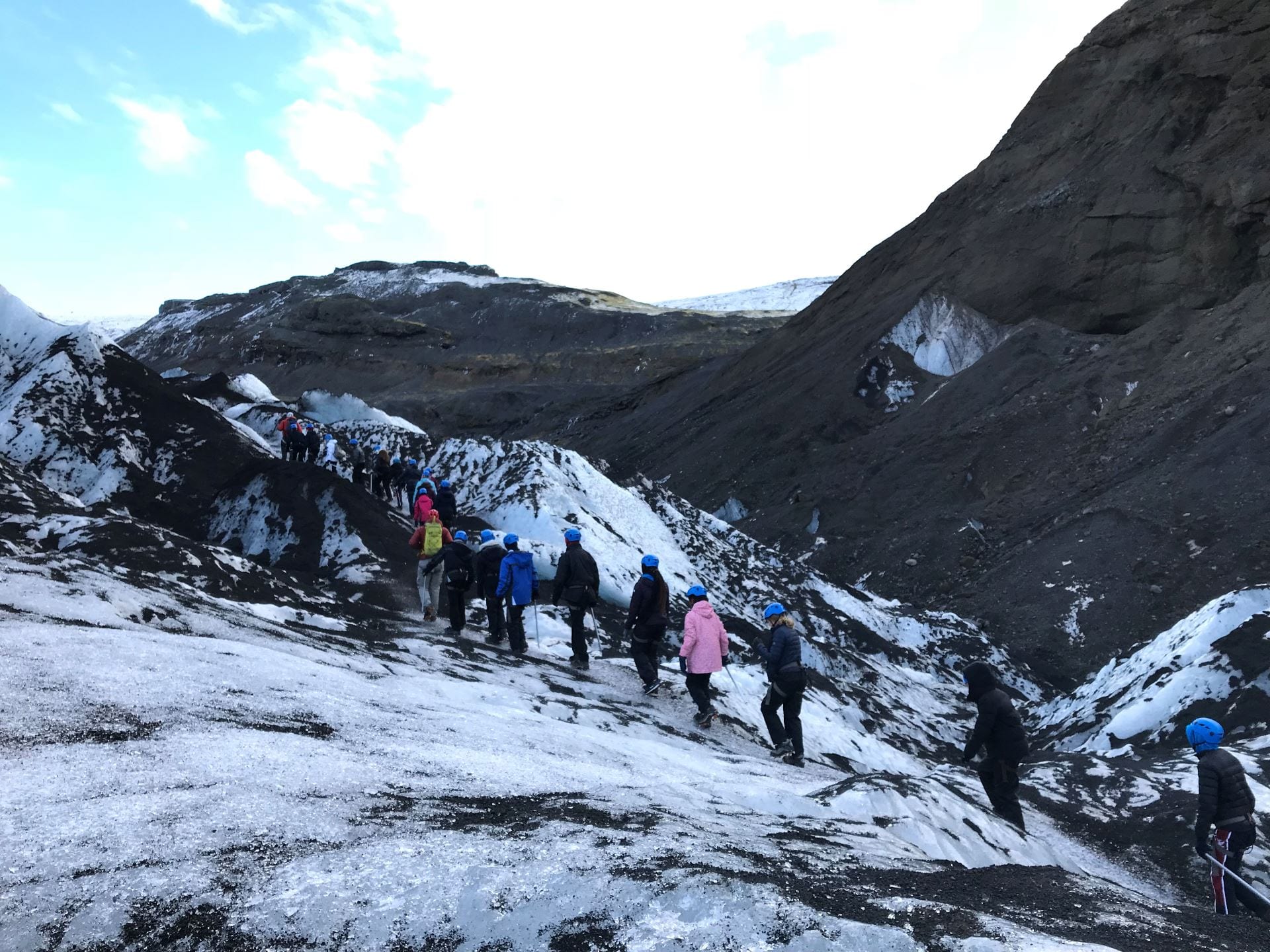 We got back on the coach to go to the much-anticipated ‘Blue Lagoon’. The Blue Lagoon is one of Iceland’s most popular visitor attractions. It is a spacious pool which has an average temperature 30-40 degrees Celsi-us. The pool is rich in silica and everyone’s face shone after from the silica paste face exfoliation! The group bought a drink from the bar to refresh themselves from the heat. 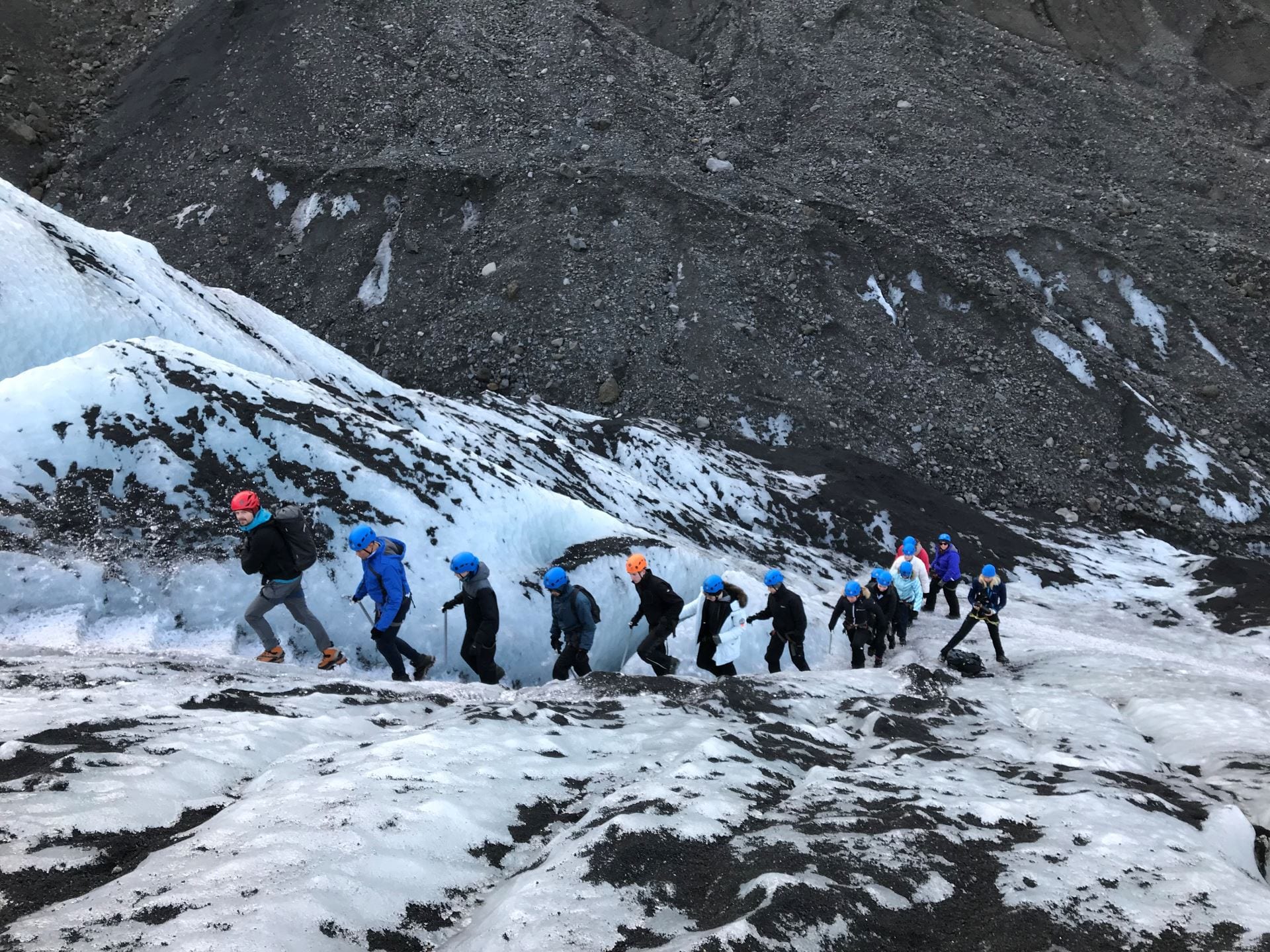 The next stop was the capital, Reykjavik. Here we saw the Perlan Museum and from the 360 observation deck the capital shone at night. It was a truly magnificent sight. Exhausted by the jam-packed day we crashed into our beds at the hotel.

On Day Two, after an early call at 6:30a.m. and group preparations, we met our guide Yohan who was a local. He was full of high spirits and ready to share his wide knowledge with us. We made our way through Iceland’s various landscapes of snow-covered lava fields and isolated towns until we reached the base of a glacier called Solheimajokull. Our experienced guide told us of the effects of global warming on the health of the glacier which became evident as we climbed. After a 15minute climb to the snout we were shown how to attach our crampons and how to use ice axes. This made us feel like proper mountaineers! We clambered onto the glacier and were immersed into a wonderworld of ice features. We learnt about the deep crevasses and ice caves. We were also lucky enough to witness the effects of the Eyjafjallajokull volcanic eruption in 2010 with ash still spread across the glacier. We learnt about how the glacier gets more flexible the deeper it gets and how it is harder on top so as the glacier moves the hard crust on top splits forming crevasses and deep cracks in the ice. 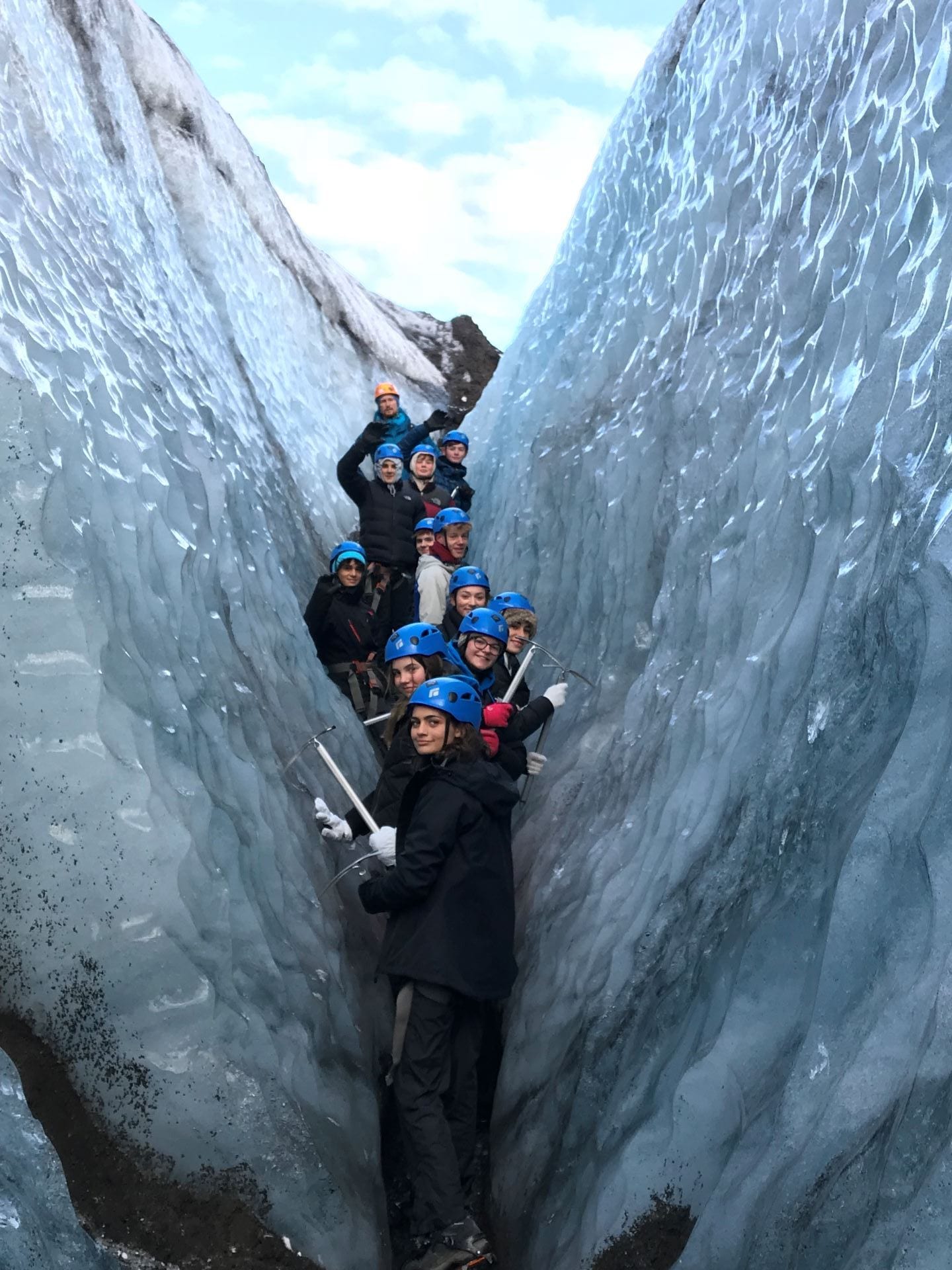 After lunch, we visited the volcanic beach Reynishverfi with amazing basalt rock cliffs and unusual black sand. The sand is black because of the volcanic activity over time with igneous rock being crushed up to make black sand over time. Another highlight of the day was witnessing the magnificent water falls of Skogafoss and Sel-jalandsfoss. They both drop 60 meters from the former sea wall. The dare devils in the group got soaked with the splash of the huge waterfalls and it made a great photo spot. The waterfalls are a great geographic exam-ple of what we had learnt in school and expanded everyone’s understanding of it. 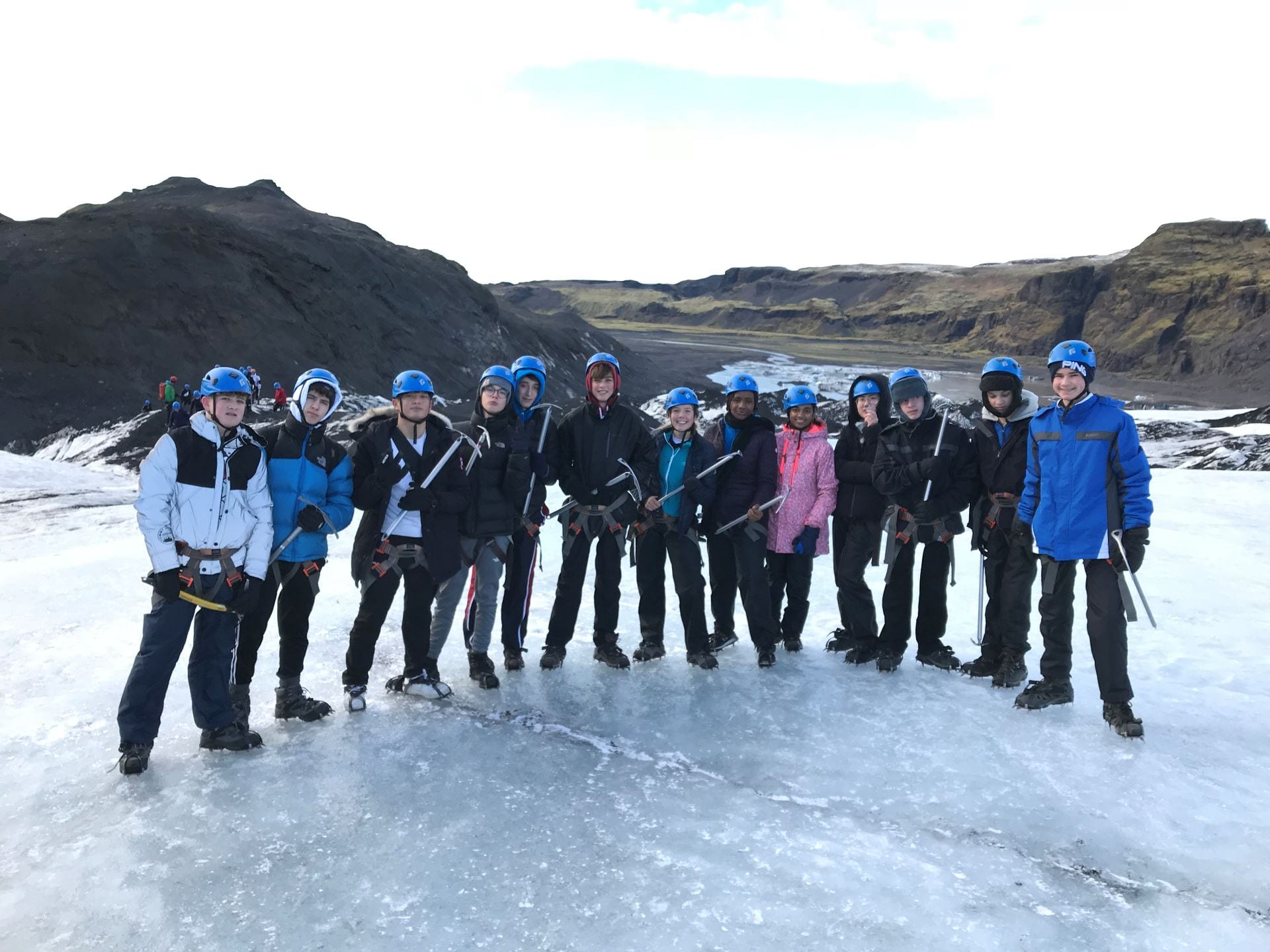 Then, we moved on to the Lava Centre which focused on how Iceland was formed and what makes Iceland so unique as an island and as an excellent geographic example. It was the end of a packed and interesting day. Back at Hotel Hella we had dinner and crashed exhausted to our beds after another long and remarkable day…….

Or so we thought, until….. we were woken up hurriedly by the excited teachers to go and see the astonishing and unusually bright Northern Lights. In our rush some of us went out in -3 degrees in T-shirts! I think it made everyone feel like they are part of a bigger picture. It was a truly spectacular sight and as we realised (perhaps more afterwards than at the time) an incredibly fortunate experience and one that most people in their lifetime will never see. 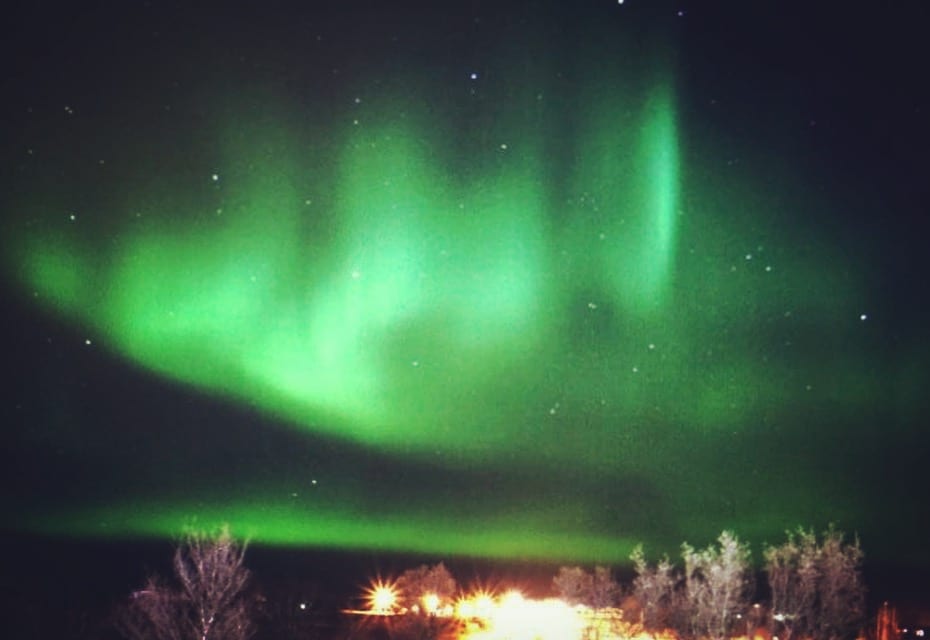 Day 3 – 2nd November 2018
After a well-deserved rest and incredible images of the Northern Lights still in our minds from the previous night at the Hotel Hella in Thrudvangur, we all ate our breakfast consisting of ‘Skyr’ (traditional strawberry yoghurt) or a selection of hams and cheeses with toast. Then, we all clambered onto the coach for our ‘Golden Circle excursion’ for the day with our tour guide Yohan. Our first stop was the ‘Secret Lagoon’; however, we were slightly early and so it wasn’t open to the public yet. Yohan had an idea to show us one of the “very secret lagoons” somewhere in the mountains nearby where not many people know of which is why it is so secret. All 60 of us got off the coach to find this very secret lagoon and unfortunately a couple were having a romantic morning swim there! So we quickly hurried back to the coach to get to the more well-known ‘Secret Lagoon’. 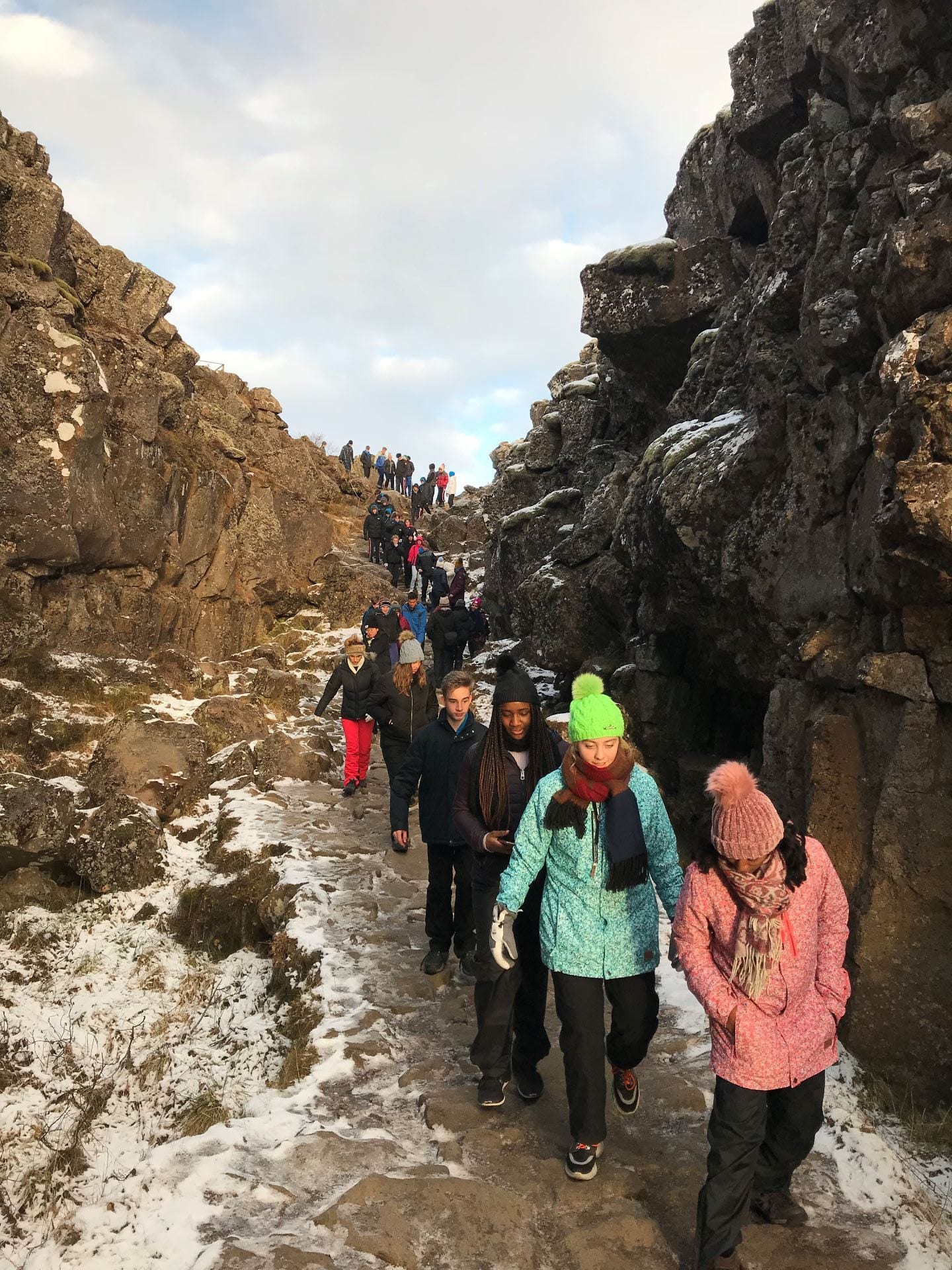 It turned out not to be so secret though: being rather busy with other schools and tourists there enjoying the warmth of the water as well. This lagoon was of a similar temperature than of the ‘Blue Lagoon’ but it felt somewhat colder as the outside temperature was more freezing. Some of our hair literately turned to ice while our bodies were nice and toasty in the warm mineral-filled water. Some of us preferred the ‘Blue Lagoon’ because it was more developed; it had a larger space for us to explore, access to a swim-up bar and the face masks were an additional benefit. 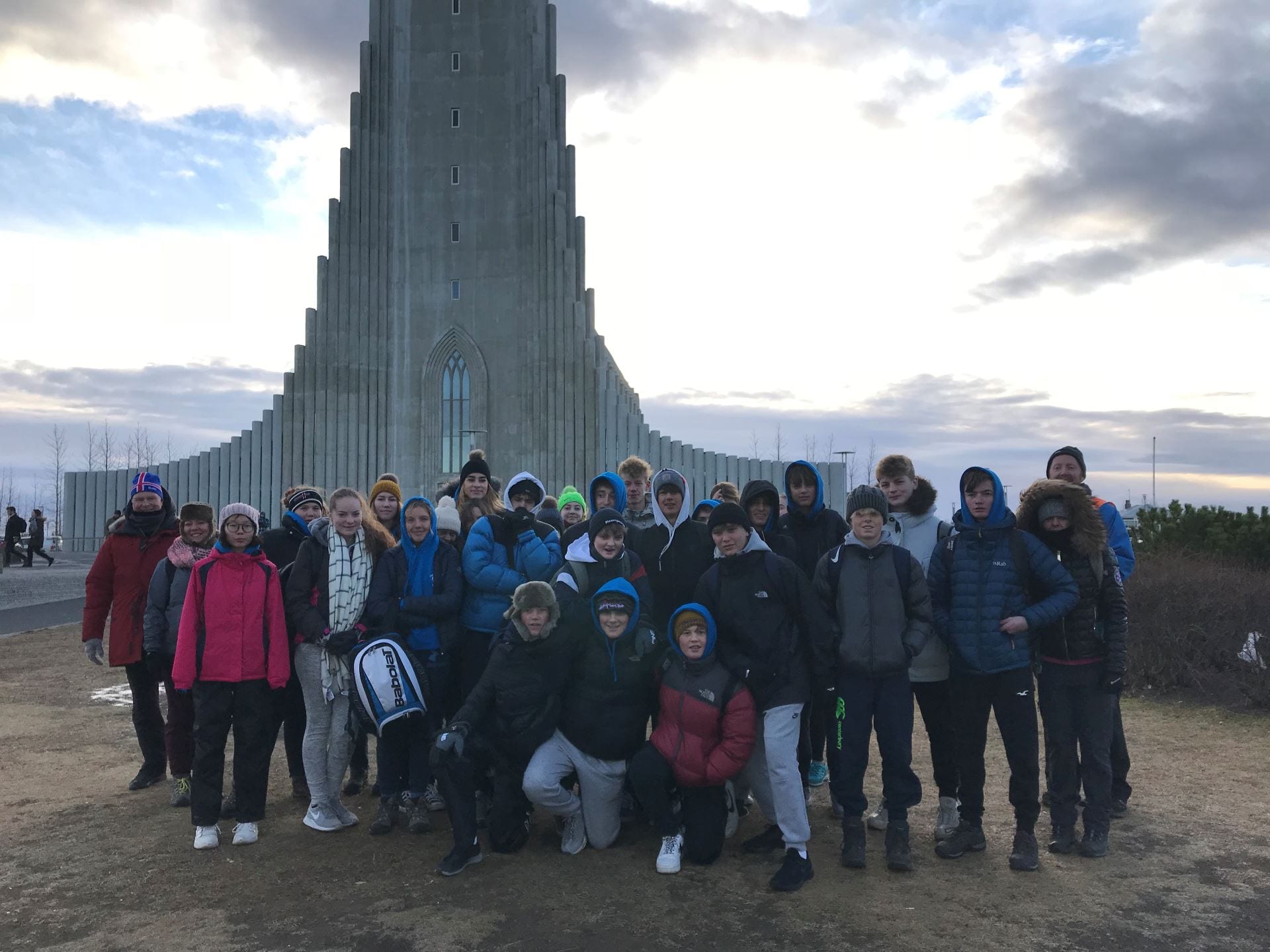 Gulfoss waterfall is one of the most photographed waterfalls in Iceland and rightly so. Dropping 33m and spanning far and wide this waterfall is truly stunning. As we uncontrollably shivered in the -8°C temperature, we walked down the icy and very slippery steps to the viewing platform to capture the view of this incredible waterfall. Incredibly, there was also a beautiful rainbow curving over the magnificent waterfall but made the view even more unreal.

Our next stop was to see the ‘Geysers’ and as there are only a few geysers in Iceland we were all very excited about being able to witness some erupting. After the first eruption, our geography teachers suggested that we walked up to the top of a small slope to view the geyser erupting from a higher point. They were right in that the eruption seemed even more impressive due to this increased height. The smell of the gas from the eruption smelt very strongly of sulphur (like a rotten egg smell) so we were pleased to get slightly further away from it! 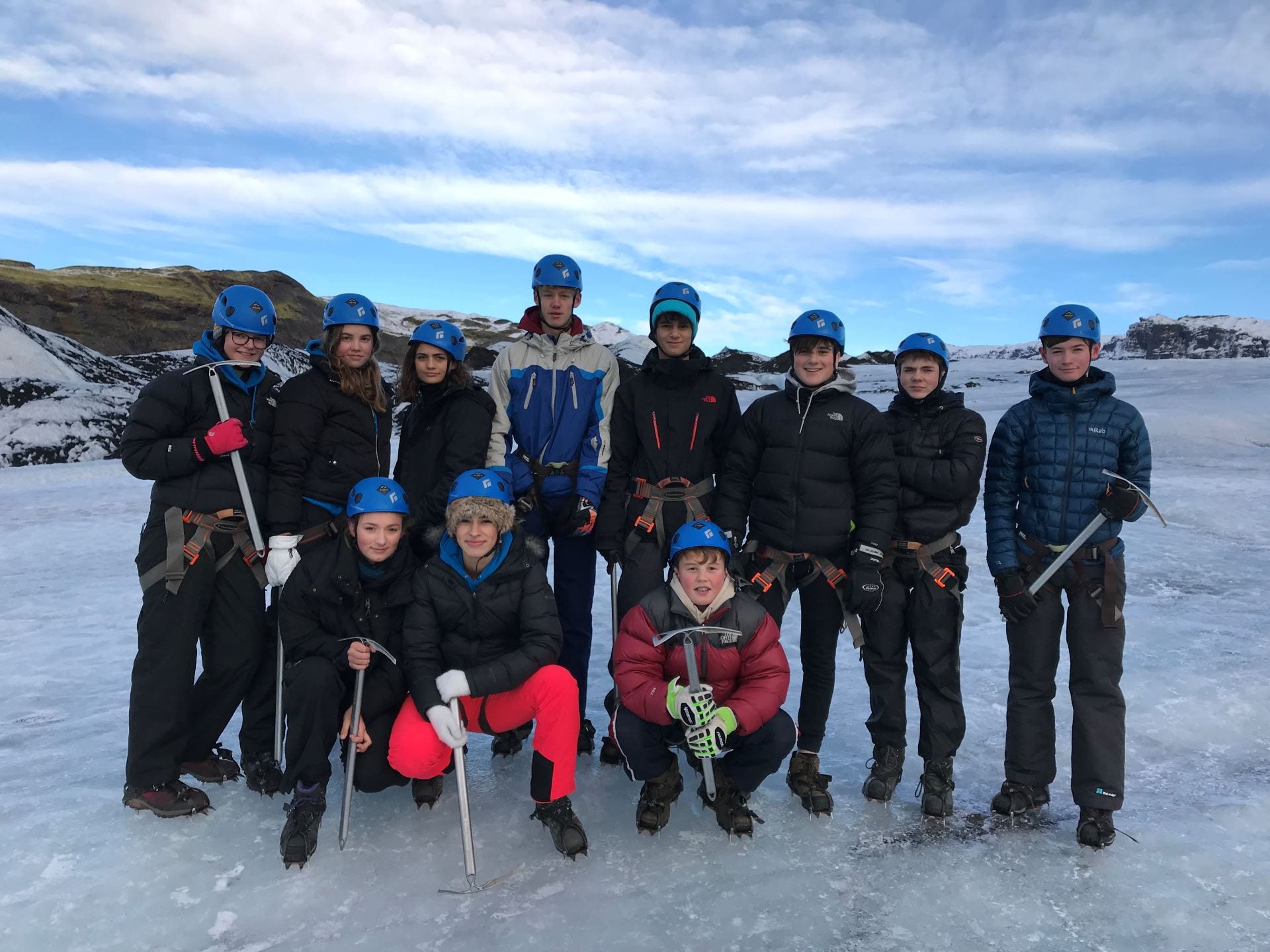 Yohan was extremely interesting, throughout the trip, giving us good insight into key destinations and information about the wildlife found in the specific areas, whilst keeping us awake on the coach journeys with his detailed stories about the history of Iceland and some of the myths; including ones about trolls living in the mountains and women who transform into seals to survive.

Our next point of destination, with Yohan, was the plate boundary between the Eurasian Plate and the North American Plate in Thingvellir. This constructive plate boundary is a sight to be marvelled at with 8km of new land between the two continents. Yohan talked to us about how this area of land was used for governmental speeches and important meetings of leaders, in the past, as it was and is considered to not be in a specific continent. Unsurprisingly, this place is used by the Icelandic people for their special events and gatherings. Personally, I found that this was one of the prettiest places of the whole trip because of its serenity and peacefulness and the calm streams with little colourful churches. Walking up to the top of the cliff edge was quite daunting because of the steepness but it was worth the trek to this high point as the view, as we put it, could have been a wallpaper option on a Mac Book Air! The view was truly stunning and naturally took our breath away. 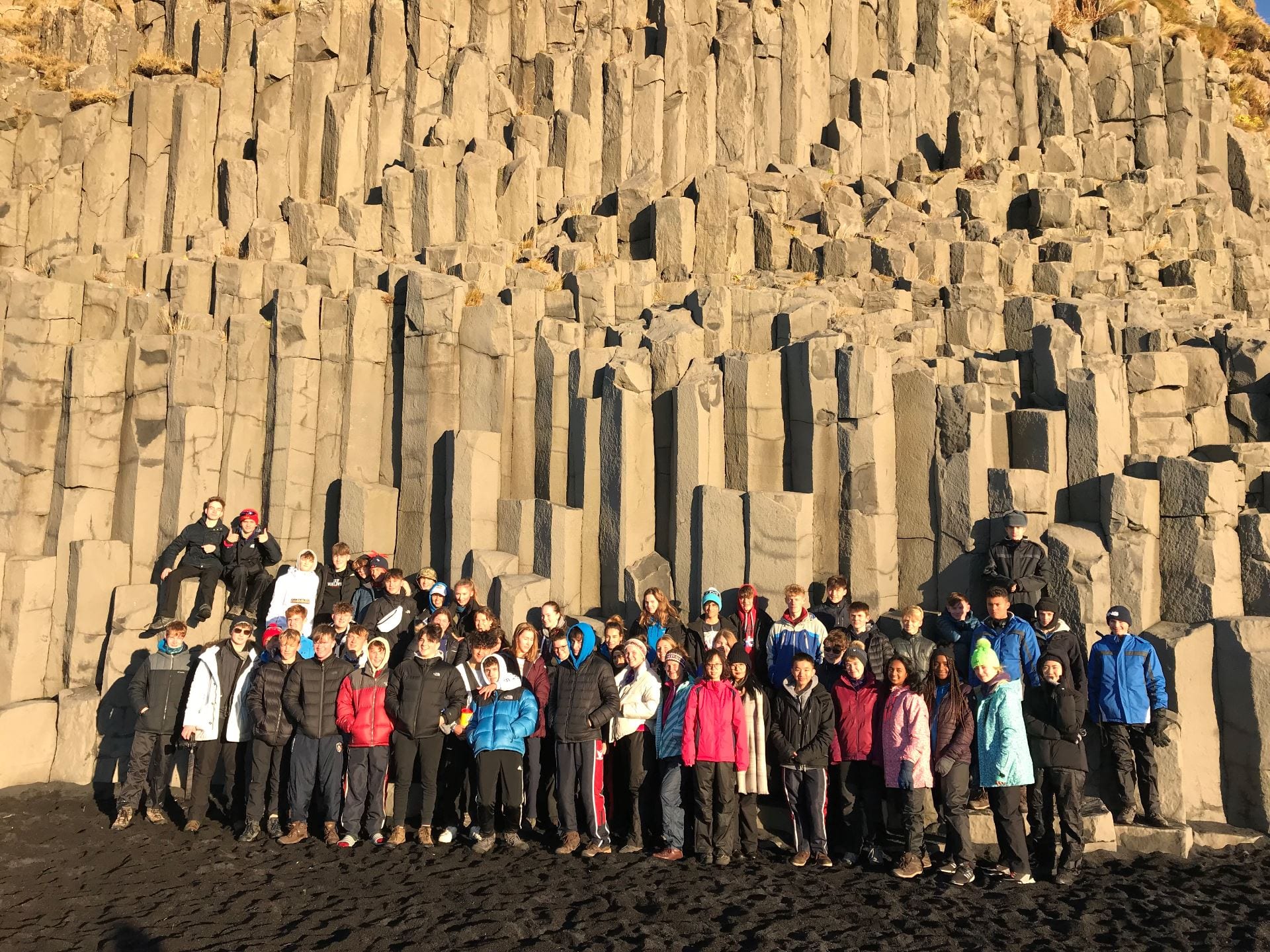 Our next journey was back to the Hotel Cabin, in Reykjavík and we unloaded the coach. Then, we took a rapid walk to the Hard Rock Café for dinner. As soon as we walked in, the first thing we all noticed was the extraordinary decorations for Halloween – they had gone full out in that aspect! The food was very tasty. It was really cool to hear an array of songs with the music video playing away on the TV screens which made the atmosphere very relaxed and fun. 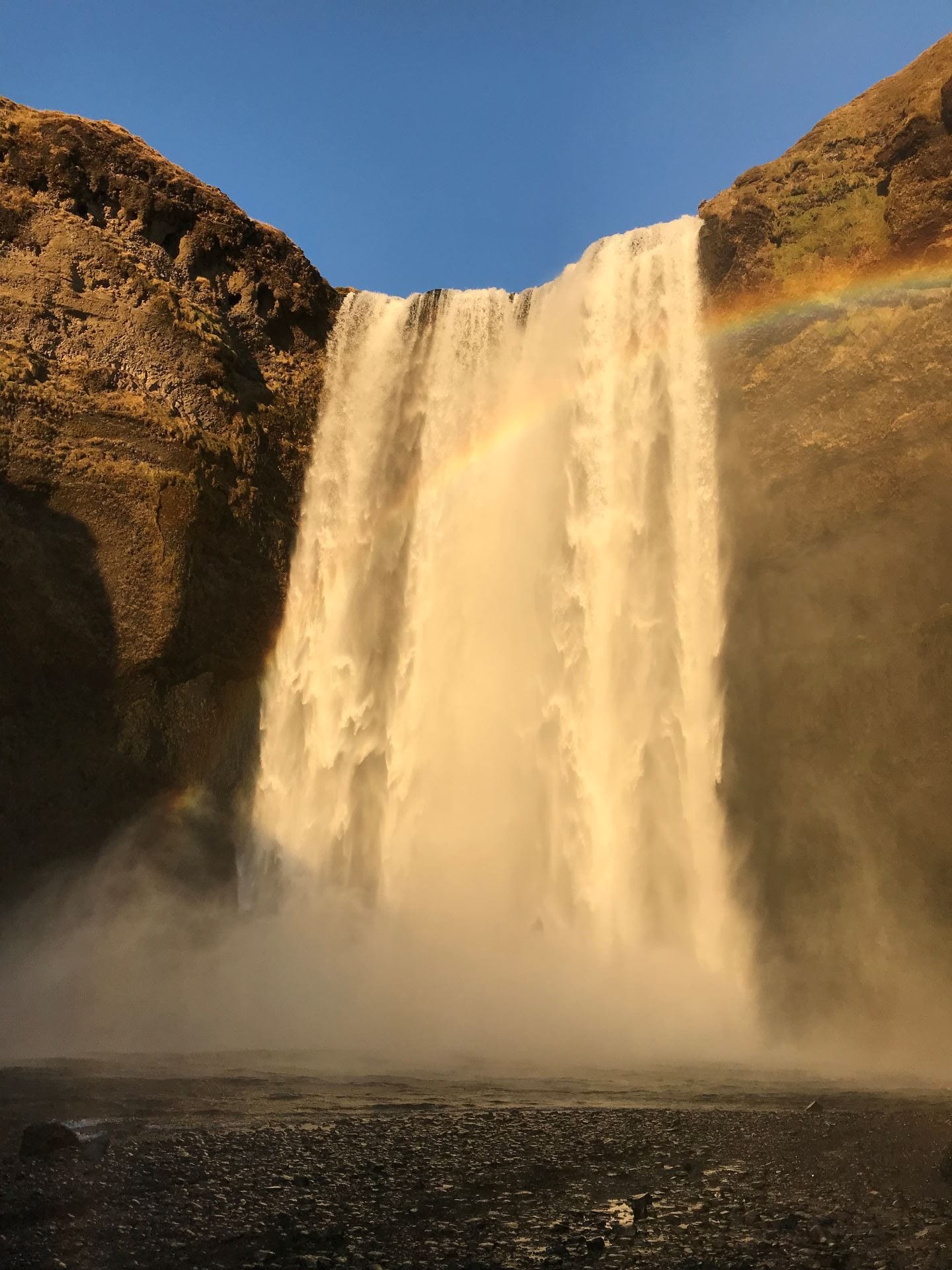 Today, we split into two groups and so while one group had the tour of the city the other had the opportunity to watch a film called ‘Fire, Ice and the Northern Lights’ in a small but very cosy cinema by the picturesque harbour of Reykjavík. This film was very informative (for those who stayed awake!) as it explained the creation of Iceland.

We also had the opportunity to have a tour around Reykjavík and experience the city where 60% of the population live. It was quite a difference compared to the rest of Iceland because there were actually skyscrapers and modern buildings. This was a very relaxed time, for all of us, to really discover the ‘ins and outs’ of the city of Reykjavík. Unfortunately, we had to travel back to Keflavik International Airport to then take the three hour flight back to Luton and eventually return home to Stamford. 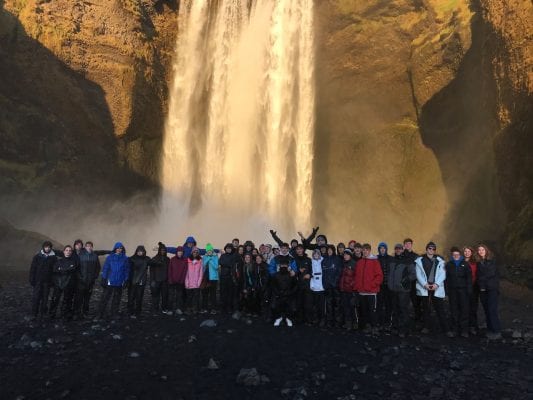 This trip was filled with new and exciting experiences across a beautiful country that not many people get the opportunity to go and explore. I, along with many others, have thoroughly enjoyed all the experiences that Mr Smith and the Geography Team have enabled us to be involved in and I’m sure none of us will ever forget these incredible moments. Now that we have created wonderful memories in this magnificent journey across Iceland, I’m sure we will further appreciate the world around us, thanks to everyone who made this unforgettable trip possible.