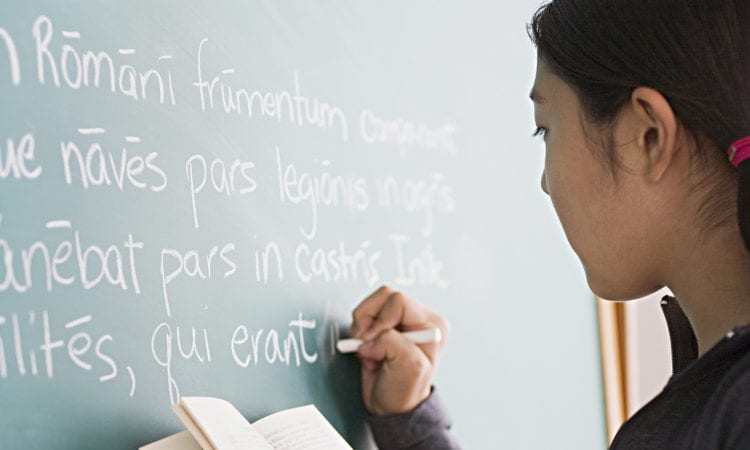 Don’t turn off the life support: why ancient languages should not be allowed to die

‘Latin is a language, as dead as dead can be; it killed off all the Romans, and now it’s killing me’. So goes the ever-popular chant, the song of the unhappy school-child, slogging their way through the third declension. But it is not correct: Latin is not a ‘dead language’, and nor should it be permitted to become one. It is, however, worryingly close to death. Until fairly recently, there were enough Latin teachers, and enough funding, and Latin was an option in many state schools. Now, with funding cut, aging teachers retiring, and the ever-present drive for ‘modernisation’, Latin teaching is almost gone from comprehensive education.

There are, of course,  some languages that are unquestionably dead, and sadly are now irretrievable. Linear A is a good example, for it exists now as a vague collection of some two hundred symbols, patterns of lines etched into ceramic finds from very early Minoan Crete. No-one knows what the symbols mean, how they sounded, or how the language they encode was structured. There are others where the language must be lost, though it may be a shame, due to a lack of funding and any economic justification for the perceived ‘waste’ of studying and recording a dying language. 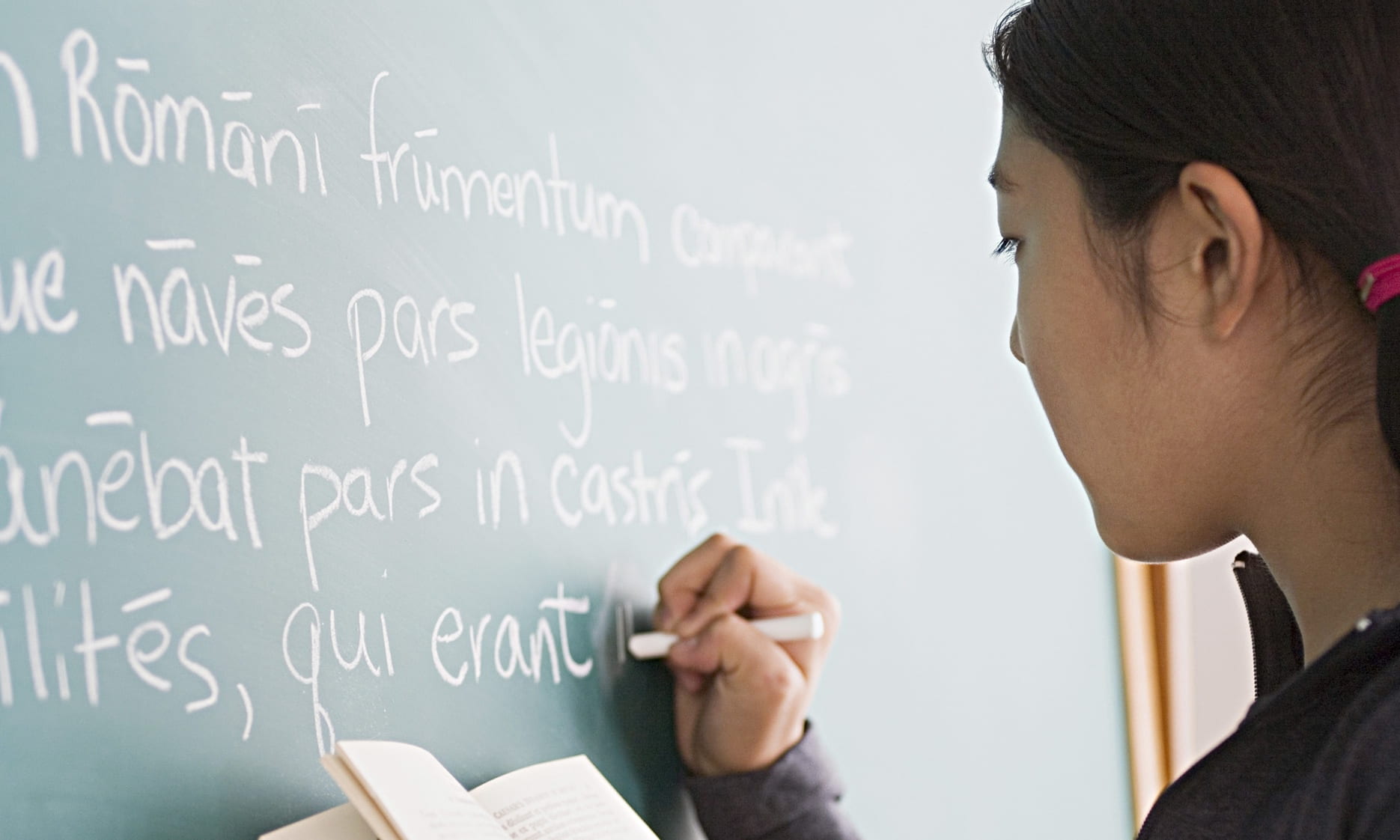 Latin, however, is not like this. It continued to be used, even after the civilisation that invented it collapsed and dissolved, and it remains, almost complete, frozen like a Pompeiian plaster-cast. It continues to offer us a wonderful insight into the lives of all who spoke it and allows for interesting and useful archaeological and historical research. This is not the only reason to retain it; for Latin also has use to the modern student too, aiding in the learning of foreign languages and the understanding of the vernacular, and I believe (far-fetched though it may seem) that it may one day reassume its medieval position as a ‘universal language’. And, while it is not the official language of any nation (for even the Vatican has now switched to Italian), Latin remains in common use all across the world. Most notably, that is with the Catholic Church, which still regularly has services entirely in Latin. In the Vatican, the seat of the Pope, ATMs offer instruction in Latin, and the Pope has a twitter account, all in Latin. But Catholics are not the only ones who still use Latin on a regular basis. Much of the modern scientific jargon is based on either Latin or Greek, and there are a few communities out there, seeking to revive Latin, who use the language as their primary language.

The first argument for comprehensive teaching and learning of Latin is simple. It is a language handed down through the generations to us, which we are duty-bound to learn, understand, and pass on to the generations that will come after us. While the classics may seem paltry next to the stresses and strains of modern life, the works of the ancient Romans are as relevant today as they ever were. From the love poems of Catullus to the histories of Suetonius, the biology of Lucretius to the astronomy of Seneca, these works, penned two thousand years ago, tell us much about the world we live in. Roman literature continues to inspire writers and artists today, and historians, philosophers and politicians, among others, continue to draw lessons from the writings of their Roman counterparts. But, you might say, they have been translated already, so why need we know the language they were originally in? My answer to that is two-fold. First, the full meaning of these works is hard to understand in translation, with double-entendres, allusions and puns often being lost, and second, new fragments of these ancient texts (and occasionally of hitherto undiscovered works) are regularly discovered, scribbled in the margins of other works, or referenced, untranslated, in grammar textbooks.

The second argument is just as clear. The rigorous learning of an ancient language (which, with no native speakers, remains constant and unchanging) aids enormously with linguistic skills, both in the learning of modern foreign languages, and in the full understanding of one’s own tongue. Despite its age, Latin, as the basis of most Western languages, is remarkably similar to the more familiar, and more modern, European languages. From the endings of the imperfect verbs in Spanish to the elision of j’adore in French, the patterns of ancient languages stay with us to this day. But the help given by ancient languages is not always as obvious as this. Simply learning one language gives you many skills which can be easily transferred to another, making learning that one quicker and easier. For example, I first learned Latin in year eight. Then, when I came to learn Russian in year nine, structures and cases which were complicated to my non-Latinist friends made intuitive sense to me. Then, when I began to learn Greek in year eleven, the alphabet made sense almost immediately, because of my understanding of Russian, while the declensions, agreements and tenses resembled those of Latin, making understanding it a much easier process. Therefore, if everyone learned Latin to a good standard early on, it would make the later learning of other languages much faster, easier, and more intuitive.

Latin also assists with fully understanding one’s own language. While we are all fluent in English, how many of us can explain an indirect question, or even what the pluperfect is, and how to use it? We do these things by intuition, and usually we are right. Most grammatical errors, however, can be traced back a lack of understanding of the vernacular. It may be difficult to reteach a language that we already know, but to learn another that works in a very similar way is easy enough. Latin, therefore, would fit this need excellently. It is similar to English, in grammatical methods, being a distant relative, and not overly complex.

Thirdly, and most ambitiously, I would like to think that one day Latin may retake its medieval position as a ‘universal language’. In the year fourteen hundred AD, any educated person could talk freely and fluently with any other in Latin, and be understood. This held true from the northernmost point of Europe, Scandinavia and Iceland, down to the north of Africa, and as far east as the plains of Russia. In the modern age, however, finding one person fluent in Latin is hard enough, let alone two so that they can have a conversation. However, this need not be the way. The classical languages seem like the obvious choice for a solution to the babel-like modern world, tightly connected by technology but divided by language. Attempts have been made previously at such a thing, most famously with Esperanto, but all the languages tried for this have been fabricated, made up by just a few people to a very rigid system of grammar and syntax. While at first this seems sensible, it means that any such language is not truly real, and is liable to fail in real-world situations. Latin, however, has been honed for thousands of years, and with the addition of a small modern vocabulary, would fill this role well. First, it is already relatively well-known, with a good number of knowledgeable teachers of the language spread across the world. Second, it is not an overly complex language, with the Latin alphabet already in general use and the grammatical structure being relatively regular. Finally, it is not the language of any extant nation, as trying to impose one nation’s language across the world may cause resentment.

Finally, Latin is fun! It may not always seem to be, but the vocabulary which remains is from Latin treatises on law, nature, politics, and war. Therefore, even the dullest of translations has an exciting plot, from rabid dog attacks to a formal dinner with a Celtic king (and even a simple description of gardening has become a popular meme – Caecilius est in horto!). Latin has always been fun, too, with ‘dog Latin’ (‘canis latinicus’) popular since Shakespearean times. In dog Latin, comical faux-Latin phrases, often in classical metres, are used either for comic effect or to assist with the learning of various Latin principles and words. My favourite example was first published in 1953, but was likely made up much earlier than that. It goes: ‘Caesar adsum iam forte, Brutus aderat. Caesar sic in omnibus, brutus sic in at’. When pronounced in tradition English Latin pronunciation, it can be transliterated as, ‘Caesar ‘ad some jam for tea, Brutus ‘ad a rat. Caesar [was] sick on the bus, Brutus [was] sick in a hat’. Not only is it comical, it is vaguely understandable, meaning, ‘I, Caesar, am here by chance, and Brutus was already here. Caesar this in all things, Brutus thus in all else.’

But, I hear you say, this is elitist – unfair – only the rich and the posh get to learn Latin. And yes, this is currently true. Latin is offered in comparatively few  state schools, whilst almost all private schools teach it. But there is no real reason for this. Latin is no harder than French, nor is it more expensive to teach. It is simply unpopular, due to its negative perception as a useless ‘dead’ language, and an unpopular subject is inconvenient to run. If more people wanted to learn Latin, and made this clear to the government, it could easily be taught universally.

Finally, I feel unable to conclude a blog about Latin and ancient languages before mentioning ancient Greek, often seen as the more extreme version of Latin, both in difficulty and exclusivity. This is an entirely undeserved misrepresentation; Greek is just as good and just as useful, despite it being even more archaic, and with a different alphabet. The saying, ‘it’s all Greek to me’ does make sense, for Greek does look complex and confusing, but once one has learned the alphabet, it by no means as complex as one might expect, and it opens up just as wide a range of literature and culture as Latin.

So, to conclude, Latin is still clinging on, and with a little governmental effort, it could easily be expanded and offered to all, with great and positive effects.