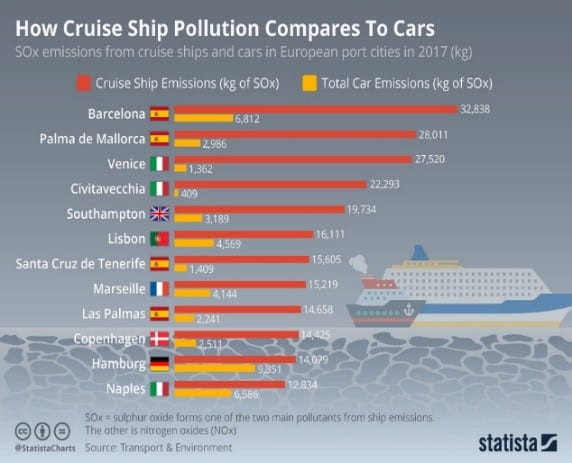 Are Cargo Ships killing the Earth?

Is the world changing at a reckless and destructive rate? A study from Conservation international shows that the carbon dioxide concentration of our atmosphere is the highest it has been for three million years proving that climate change is an undergoing threat to our society. This petrifying figure is what’s making mankind fight for our environment. But, does the restoration of our environment mean the demise of our economy?

Industry organizations are fighting for change. Demanding Cargo ships drive slower which will ultimately, decrease pollution by 12% by 2030. Furthermore, they are developing electric cargo ships that will emit less. There are few in practise for example China have one working at Pearl Harbour traveling 50 miles on one charge. Moreover, The Smart Green Shipping Alliance hope to launch a 100% renewable ship by 2023. However, governments have discussed decreasing the amount of cargo ships deployed. But what affects will this have?

A report from Mark Piesing states roughly 9/10 items are imported meaning decreasing cargo ships would make it harder for countries to get resources. For example, the USA imports huge amounts of fuel and oil. This decrease means that it will harder for them to obtain this. Therefore, transportation and production would be greatly affected as there would be less fuel to maintain the machinery. Consequently, this would increase cost of production in America as the price of fuel would increase, thus increasing the overall price of goods and services. This could easily lead to inflation. Likewise, decreasing cargo ships would also have a huge affect on exporters. India, is a huge exporter due to its large population providing cheap labour. If India had to export less due to the decrease in Cargo ships. It would decrease the need of their factories resulting in millions of people becoming unemployed.

There are some ways to mitigate the risks of reducing cargo ships. One way is to have higher taxes on luxury goods that require importing. An increase in price will cause a decrease in consumption as luxury goods are price elastic. However, this is protectionism and can inhibit economic growth. Moreover, many countries can look to being self-sufficient instead of importing. The USA imports $386.4 million in machinery. By introducing factories to create their own it will stop the need for millions of imports. Likewise, the jobs this would create would lead to huge economic growth for them.