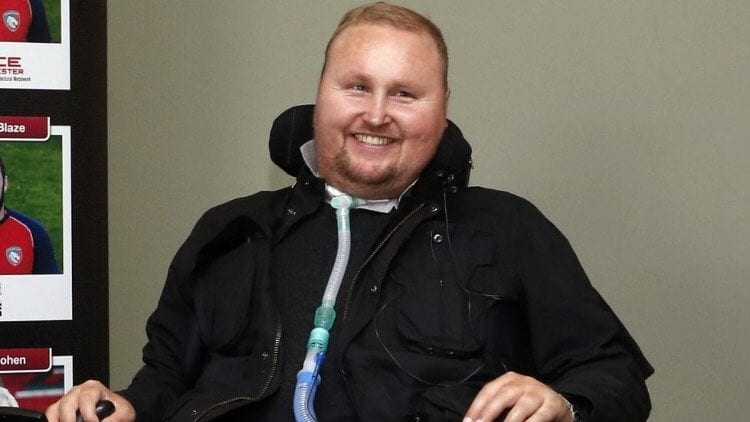 This week we were lucky enough to receive a talk from Matt Hampson. I had known of his charity work before as we had done a charity walk raising money for his foundation. What I didn’t know was the story behind him.

Matt Hampson was born on the 29th of November 1984. From a young age Matt had shown interest in rugby, joining Syston RFC when he was just 12 years old. Soon after, he joined the Leicester Tigers academy in the under 16 age group. His future rugby career looked promising as he advanced into the England U18s and Eventually the U21s.
Whilst preparing for a U21 six nation game against Scotland, in what Matt describes as “a freak accident”, the scrum collapsed. He severed his spinal cord and leaving him paralysed from the neck down and breathing via a ventilator.
“That was the initial thoughts – why me, why me?” Matt described how it felt to have such a bright and brilliant future torn away from him in seconds. Despite the severity of the injury, he still manged to maintain a positive attitude, saying how grateful he was for such a supportive and caring group of friends and family. Matt’s background in sport also gave him the perseverance needed to keep motivated through such testing times

However, upon leaving the hospital Matt felt as if he lacked purpose and that he didn’t know what to do with his life. This is when he decided to work with the Matt Hampson foundation. They provide advice, support and relief for anyone suffering serious injury or disability, helping them adapt to such radical, life changing events
The charities philosophy is focused around Matt’s unwavering resilience, positive outlook, and determination which allowed him to not only help himself but over 200 others in a similar position to his.
Matt’s Hampton and his work is best summed up by his own words: “Get busy living, or get busy dying’ – I got busy living.”