Social media has now become a major part of everyone’s lives with it being accessible through phones which can now travel with us where ever we go. Social media has become an integral part of UK politics with Most MP’s and political journalists having an account. This leads to a rise of passive consumption. There is now also a wide range of social media platforms which vary in user numbers and age of uses. These platforms all offer something different for the user. Anyone can now set up an account for themselves or for an ‘organisation’ or ‘cause’ or under an Alias. Because of this social media has become a place where political viewpoints and ideological inputs can be shared with just a click, typically no repercussions at all. This can create an echo chamber for some where they don’t here a balanced and fair argument on key issues and instead here heavily partisan and potentially false or exaggerated views and opinions. This leads to some opinions being seen as fact. This divides the world now as social media has become greatly polarised.

One way social media has ruined may of ruined politics is seen in the 2019 election. Piers Morgan summed this up by tweeting ‘twitter loses yet another election’. This was all because twitter and it’s users were adamant labour was going to win the election after seeing the vast amount of support labour had on the platform. This was seen in a study conducted by Cardiff University where the labour leader Jeremy Corbyn accounted for seven of the most liked tweets in the campaign and comprised 13 of the top 14 most liked tweets. This was supported by rapper Stormzy, who is known for being left leaning as seen in his song Vossi Bop, saying he will vote for Labour in the upcoming election. Labour supports on twitter believed they had the momentum and the majority as the conservative voices on the platform were a quiet minority in comparison. However, data from the 2019 audit of Political engagement on twitter by the Hansard society shows that labour is disproportionately over represented in relation to Conservatives on the platform. The study concluded conservative voters are outnumbered 2 to 1 by Labour voters as of 2017. This all supports that social media, twitter, is drastically wrong on outcomes of major UK political events. It ruined the election for some as it led them to a false sense of security that Labour were going to secure their first majority in nearly a decade. This shows how social media ruins politics. However, twitter led to an increase in young voters registering after tweets by Stormzy and KSI reminding and sharing a link. On one day 350,000 people registered to vote, a record, as a result of these tweets. 150,000 of these people were under 25 which suggests these tweets could of increased youth turnout. 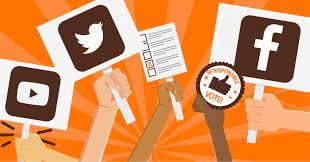 Social media is also home to a lot of misinformation. This misinformation can be on anything but is traditionally political. For example, on Facebook around the 2016 US election there was a rise in ‘fake news’. This is fabricated information that disseminate deceptive content, or grossly distort actual news reports shared on social media platforms. This media gets shared and creates an echo chamber of lies and false narratives between Facebook groups and friends. The echo chamber is exacerbated by bots who automatically share the false stories posing as a legitimate organisation/outlet or real-life person. The stories were mainly about Trump’s candidate Hillary Clinton and was a key factor in his shock victory. The fake news undermines Facebook’s mission statement of connecting people, instead somewhat dividing people. This division is because of the fake news as it polarises the platform and attempts to influence ‘floating’ voters and make more passionate. Fake news spreads like wildfire on the Facebook as it only takes one click to share the news to a new set of people and voters. The Pew Research Centre found that 44% of Americans got their news from Facebook.  This is important as of the three largest right-wing pages on Facebook 38% of posts were ‘false or misleading information’ and the three largest left wing pages being at 19%. The issue of fake news was amplified by Trump who claimed climate change was a ‘hoax’ and told his followers not to trust the traditional media. This all leads to a dependency on fake news as it is dressed up to be alternative online media. Overall, people look and will believe what they want to hear increasing the impact of fake news to a higher level than ever seen before. The fake news isn’t just being generated in America with a cluster of Pro-Trump sites being set up by teenagers in Macedonia motivated by the high revenue gained through adverts on their websites. On the whole, Obama described fake news and conspiracy theorists in particular as a ‘dust cloud of nonsense’ which perfectly sums up the ‘media’ in circulation around the time of the 2016 election. All of this ruin social media as it ruins the debate as people will try and persuade with false information which undermines the principles of democracy.

Social media is also home to many young people who have become ‘clicktivists’. This is the practice of supporting a political or social cause via the internet by means such as social media or online petitions, characterised as involving little effort or commitment. This leads to the belief in some political issues becoming a social trend. This form of clicktivism is typically more associated with teenage girls but not exclusively.  This is aided through Instagram making it easy to post someone else’s post on your story with ease for 24 hours. It can be seen as spam which leads to some disregarding the cause on that basis alone. They usually support issues such as racism (BLM summer of 2020) and safer streets at night for women (March 2021). This leads younger people not supporting or participating in mainstream politics as these issues are time sensitive and not able to be supported by the parties. This represents a disconnect between the major parties and the younger generations which could create conflict in the future. It also creates tension within as it politicises non-political issues which blurs the lines and can create confusion. It can also lead to false or one sided narratives being created as the causes supported are typically one sided. It can also be toxic as it can be used to attack people who don’t support them or have a differing view on the matter. This was seen on Tik Tok when countless girls tried to call out boys when they would post and support the removal of the European super league but not any of the key issues of the day they believed in. Clicktivism is very subtle in it’s ways but could become the future of politics in the UK. It can also become a threat as it could lead to a reduction in voter turnout at future elections and a drop in participation and formal engagement.

Social Media also brings the issue of “Cancel Culture”. This is a modern form of ostracism in which someone is thrust out of social or professional circles, whether it be online, social media or in person. Typically this person is rejected upon a comment or action in the past instead of being allowed to re-educate. This is typically seen on twitter by the ‘woke’ left wing where they are seen to be ‘forcing their view’ on others. This in practice does not work as it can ruin someone’s life even knowing they have changed, especially over old tweets or comments. This trend has been described by many news outlets as toxic and inefficient as it does not provide a solution. The people involved have been likened to FBI Investigators based on how far they will dig to find something about someone or something. Typically they try and speak on behalf of others based on their opinion on how society be. An Example of cancel culture is when brands such as Aunt Jemima and Uncle Ben were put under pressure to rebrand because of their Branding as it’s seen as stereotypical and offensive. Cancel Culture does have it’s non-direct consequences when brands and people are pre-emptive of this and place warning or filters on things that were traditionally seen as okay. An example of a consequence is when Disney + put a filter on old classics such as “dumbo” because of apparent stereotypes portrayed. This all associated with the idea of being ‘woke’, which stems from an 1962 New York Times article. This can be seen as a negative by some as it’s corrupting and running totally innocent items such as a kids cartoon. The Kid’s game Fortnite removed cops cars as a result of George Floyd’s killing, as well as Paw Patrol (Kid’s TV show) removing their police orientated character. This was all because of trying to be seen good. These things are harmless but have been weaponised in the name of social injustice and politics. The people that try and cancel are a very loud, well mobilised minority who run many things for the majority.

On the whole, all of this kills the political discussion and forum once associated with a free and fair democracy. Each side of the political spectrum now tries to silence one another with toxicity. Platforms like twitter have great amount of power, more now than ever before which means this is an issue that now needs to be taken more seriously. Social Media has and will continue to tear traditional politics apart.