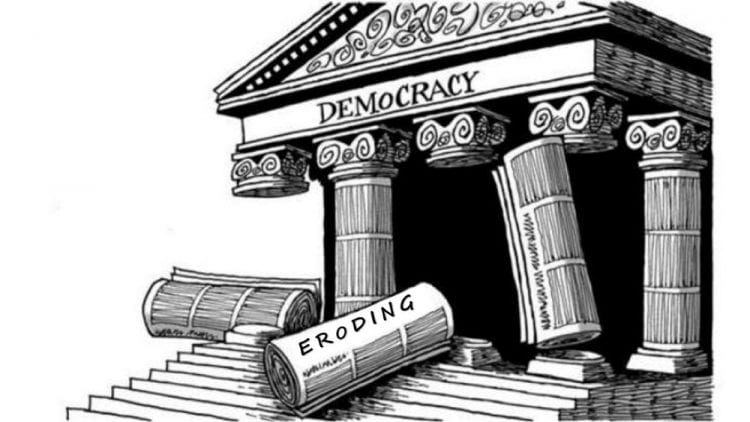 Is democracy experiencing a setback worldwide?

As stated in ‘Democracy and Dictatorship Revisited’, a regime is able to be classified as democratic, providing the chief executive is selected through either a popular election, or is chosen by an elected body, the legislative body too, must be elected, and lastly, the electoral system must be competitive, with more than a single party competing for votes . Throughout 2020, democracy has experienced setbacks, which could be attributed to the global COVID-19 pandemic which hindered people of their freedoms, providing a number of authoritarian regimes an ideal opportunity to take advantage of the situation, at democracy’s expense. 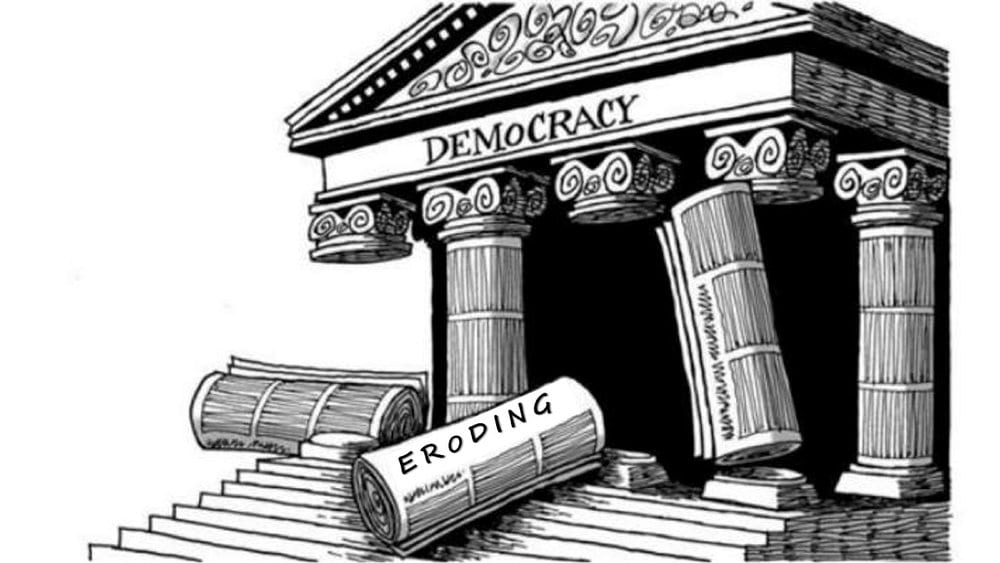 With the worldwide introduction of preventative lockdown measures to limit the spread of the COVID-19 virus, individual liberties and democracies have come under great threat . This is a sentiment reflected by the International Institute for Democracy and Electoral Assistance (IDEA). They state that the pandemic is a “political crisis that threatens the future of liberal democracy” . However, they do not say that using lockdown as a means of containing the virus is itself an authoritarian measure, rather, the failure of democratic countries to successfully combat the virus, can be used to portray democracy as being ‘weak’, providing scope for less democratic regimes to impose restrictive measures for less benevolent purposes. The possibility of lockdown measures being used to suppress, or target individuals was something recognised by United Nations human rights experts as early as the 16th of March 2020: “Restrictions taken to respond to the virus must be motivated by legitimate public health goals and should not be used simply to quash dissent” . Imposing lockdowns certainly involves risks. Many believe that such policies cause more harm than they benefit public health, such as the damage to mental health and the public finances democracy depends upon. As stated in the ‘Great Barrington Declaration’ , “Keeping students out of school is a grave injustice”, and these measures will also “[lead] to greater excess mortality in years to come”, regardless of this, there has been little alternative posed. Even in countries where more relaxed measures have been followed, such as Sweden, the “libertarian paradise” , third on the democracy index, ultimately had to impose an emergency lockdown in January 2021 due to hospitals being overwhelmed. Whilst lockdowns may be medically necessary, there are undeniable consequences politically, even in democratic countries, like Sweden, meaning this outcome is only likely to be more extreme elsewhere.

Viktor Orbán, the Prime Minister of Hungary, gained great attention when in March 2020 he was granted extraordinary powers due to the state of emergency in the country. Although the position of his government ruling by decree was revoked in May, this reflected an already developing trend in the more recent democracies of Eastern Europe. In 2010 Hungary was viewed as being a ‘Consolidated Democracy’, by Freedom House but has now fallen to a ‘Transitional/Hybrid Regime’ in 2020 . This increase in authoritarian regimes and the power these hold is something experienced worldwide. The Democracy Index 2019 finds that the global score has declined; this stood at 5.48 in 2018 and had fallen to 5.44 out of 10. In Eastern Europe, authoritarian regimes like the Chinese Communist Party (CCP) will “[take] advantage of domestic vulnerabilities” . For example, in Montenegro and North Macedonia, 39%, and 20% of all foreign debt is owed to China, allowing them to influence the political agenda.

However, China’s power is not simply being exploited overseas. As reported in the United States’ House Foreign Affairs Committee Republicans’ China Task Force Report , in the North West, Xinjiang region, of China there were “a million or more Uyghurs…languishing in concentration camps where they are forced to undergo extensive ideological ‘re-education’”. Likewise, the Australian Strategic Policy Institute stated that between 2017 and 2019, more than 80,000 Uyghurs were transferred from Xinjiang to work in what have been indicated to be forced labour conditions in other areas of China . Although these camps are now widely known about, many companies such as Apple, Nike, and Volkswagen continue to use suppliers who have factories there. If the authoritarian regime that instigates this is not held to account by companies in established democracies, or their governments, it is inevitable that these abuses will continue, potentially “opening the door to outright genocide” .

It is hardly a coincidence that regimes such as the CCP have taken this opportunity to suppress those they see as holding dissenting views. In Hong Kong, despite claiming to have consent of the governed, they welcome “brutal repression, the silencing of dissent and the absence of real elections” It was only on the 6th of January 2021, when the Hong Kong police arrested 53 pro-democracy politicians . Distracted by the medical consequences of COVID-19 and its financial impact, more mature democracies that may have taken action, have done little other than pass token criticisms. That the EU has chosen this moment to conclude an investment treaty with China is not suggestive of democratic concerns being prioritised over commercial interests .

Yet the impact of COVID-19 is not limited to authoritarian regimes or fledgling democracies. Three decades have passed since Francis Fukuyama wrote ‘The End of History and the Last Man’, where he suggested that “the universalization of Western liberal democracy as the final form of human government.” . Despite this optimistic view, these years have seen growing populism and a polarisation of opinion in many Western electorates. It might be argued that this is the result of discontent with the social consequences of globalisation or the financial crash of 2008, yet there is undeniably a sense that western democratic institutions are not serving all of their electorate equally. This was hardly a vote of confidence in democracy, and this was before the impacts of COVID-19.

The recent election in the United States demonstrated just how combustible such discontent can become, especially when combined with the impacts of a pandemic. With Republican voters significantly more likely to vote in-person at a polling station than Democrat supporters. The increasingly large number of postal votes registered and their potential impact upon the election result led President Trump to block additional funding for the United States Postal Service (USPS) to make delivery of these more difficult. Following the election, Trump claimed he had won the “legal vote” due to alleged electoral fraud as postal voting was so high. Postal votes inevitably invite suspicion of fraud, and left unchecked, can undermine the validity of the election result, and therefore democracy itself. However, in a 2017 study of voter fraud in the United States showed this to be minimal, standing at between 0.00004 and 0.00009% . In the ensuing lawsuits, no evidence of fraud was found. That it was the highest voter turnout in over one hundred years , might be considered an endorsement of democracy, but despite this, Trump continued to post on social media about fraudulent votes, writing on Twitter that “VOTER FRAUD IS NOT A CONSPIRACY THEORY” . His refusal to concede defeat undermined the democratic process and the peaceful transfer of power, fanning the flames of indignation, ending on the 6th of January 2021 with a pro-Trump mob storming the Capitol in an attempt to frustrate confirmation of the election result. This violent response undermines democracy, as it attempted to counter the result presented by due process, simply because one group neither liked nor wanted it.

For inciting the incident: “If you don’t fight like hell, you’re not going to have a country anymore” , Trump’s twitter account, and those on other social media platforms, were suspended on the grounds that he might continue to incite violence and riots. The censorship of Trump carries risks that it could “only [drive] hate underground” , although in this instance his supporters might consider it a legitimate political opinion, rather than hatred.

It certainly brings to an end the belief that the internet is a place where free speech can exist without interference. That it would benefit democracy worldwide has become a myth as Silicon Valley becomes increasingly political. To what extent corporations such as Twitter or Google, were trying to protect democracy, or themselves is debateable. Quite inadvertently their actions have brought into the open concerns about the power of corporations who hold considerable influence on the democratic process with no responsibility for its consequences. Although the United States Declaration of Independence may highlight “Life, Liberty and the pursuit of Happiness”, liberty is being eroded as the threats to democracy grow greater.

Despite democracy suffering internationally, exacerbated by the pandemic, Malawi proved to be an exception, being the one country in 2020, where democracy improved . Following the discovery of irregularities in the election polls of 2019, judges in Malawi upheld the rule of law, as well as ensuring the separation of powers by calling for another election.

Malawi may be an exception, but the setbacks to democracy have been undeniable, and COVID-19 has undoubtedly aggravated this. It has damaged trade, government institutions, and international relations, the consequences of which are likely to continue for some time. Alongside this, authoritarian regimes have only increased their power, especially in states where democracy is not as firmly established. Although Fukuyama may have stated Western democracies to be what will exist at the end of mankind, this does not prevent setbacks happening in between then and now .