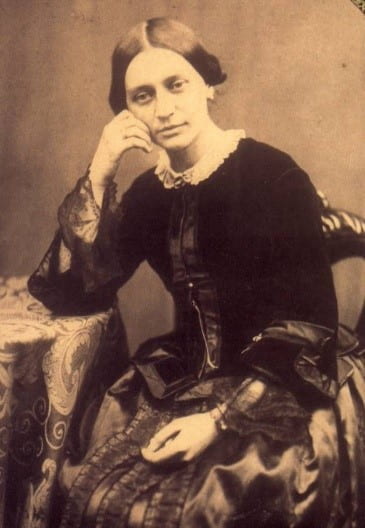 In our A Level music lessons, we’ve just finished studying Clara Wieck-Schumann’s Piano Trio in G minor Op. 17 Movement 1, written in 1846. She wrote it when she was going through a troubled time in her life, ill in bed due to her fourth pregnancy, looking after her children, and also looking after her husband, Robert Schumann, as he was extremely mentally ill and had been since he was young. After spending over 2 years in an asylum, he died in 1856, and Schumann was left alone to look after her 7 children and compose for a living, all while being a widowed woman in such an oppressed time. However, she did have the help from a contemporary composer, and lifelong friend, Johannes Brahms, who was in love her, but was best friends with Robert. Clara’s life interested me so much I thought it’s definitely worth sharing, especially during Women’s History Month.

Clara Wieck was born in Leipzig, Germany in 1819, her parents also being musical. Her father, Friedrich Wieck, was a piano teacher, and her mother, Mariane Bargiel, was a well-known soloist. Clara was gifted from a young age, and started performing internationally in her early teenage years. At age 15, she produced a piano concerto in which she performed with Mendelssohn conducting! Composing was also a talent of hers from when she was young, but due to the expectations at that time, she was best known as a soloist throughout her whole career, not a composer, due to the fact that women were more seen as performers of music written by men instead of being independent composers. She was also mainly seen as the main performer of her husband’s works, Robert Schumann, despite her many compositions.

Robert Schumann was one of Clara’s Father’s piano students, and they formed an intimate attraction, despite the opposing views of her father. He did not agree with the pairing, even taking it to court, but they got married anyway in 1840, one day before Clara turned 21. Surprisingly, being a man in this time, Robert completely supported and encouraged Clara’s love and talent of composing. However, he knew how difficult it was for her. He said that ‘Clara has composed a series of small pieces, which show a musical and tender ingenuity such as she has never attained before. But to have children, and a husband who is always living in the realm of imagination, does not go together with composing’. Clara also encouraged Robert to compose for instruments other than the piano. They both worked well together, pushing each other to try new things. However, unsurprisingly, it was Robert himself who became known for his compositions at the time. Clara only became known for her composing years after her death. 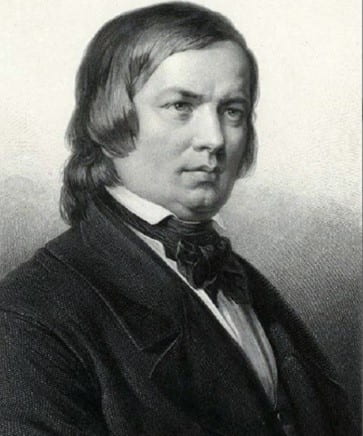 Unfortunately, their married life steadily went downhill. Robert’s mental illness was first noticed in 1833 as multiple severe depressive episodes, when he was 23, and increasingly became worse with delusions of being poisoned and mental exhaustion. It is now thought he had a mixture of bipolar disorder, depression and possible mercury poisoning. He attempted to commit suicide in 1854, and was immediately admitted to an asylum, where he died just over 2 years later in 1856. Robert and Clara had eight children in total, but were also partly unlucky on that front. Julie Schumann, their third child, was in a delicate state of health her whole life and died in childbirth when she was 27. Their fourth, Emil Schumann, died suddenly at the age of 1. Their fifth child, Ludwig Schumann, fell mentally ill at the age of 20 and was admitted to an asylum for the rest of his life. Clara never saw him again. Ferdinand Schumann, the sixth child, was the only one to pass on the family name, but was also cursed with the Schumann’s mental health issues and became addicted to drugs and died at age 42. Clara helped provide for his family. Their last child, Felix Schumann, named after their late friend Felix Mendelssohn, was born after Robert was sent to the asylum, never meeting him, and died when he was 25. It was a hard blow for Clara, but also to Johannes Brahms as he was Felix’s Godfather, and both shared an interest in music and writing.

However, some of their children luckily lived long lives and did their mother proud. Clara and Robert’s first child, Marie Schumann, dedicated her life to her mother. She was born in 1841, a year after her parents got married, almost being the constant in Clara’s married life. She was the closest to her parents, and Clara relied heavily on her, both personally and professionally. Eugenie Schumann, her younger sister, remarked that ‘Thanks to Marie, Clara could live entirely for her profession’, as she helped out with the daily tasks at home and helped caring for the children. Clara taught a piano class in Frankfurt before and after Robert was sent away, and Marie was the chief teaching assistant and helped take care of her students. Elise Schumann, the second oldest, was also a piano teacher in Frankfurt and lived a long happy life with her husband, a businessman called Louis Sommerhoff. The seventh child, Eugenie Schumann, was also a teaching assistant to Clara, and became a piano teacher herself years later. She lived with her life-long partner, Marie Fillunger, a singer. Schumann had no problem with their situation, as it must’ve been unusual in the 1800s. I believe she couldn’t imagine mistreating her own daughter and her partner while being constantly discriminated against herself, being a female composer in a ‘Man’s World’.

However, a man that definitely didn’t treat her with any disrespect was Johannes Brahms. Their relationship was very muddled and messy and there are still many unanswered questions about them to this day. Brahms was Robert’s protégé and he was initially discovered by Robert in the first place, even declaring that the young man was ‘the coming saviour of German music’. Robert made his name known across Europe, and Brahms loved and admired him for that. So after Robert was sent to the asylum for almost a year, Brahms’s strong feelings for his best friend’s wife, Clara, were unbearable. He wrote in a letter that “[He] can do nothing but think of [her]…”. His feelings, however, were not unreciprocated. Clara had strongly relied on him for the past year, making him the Godfather of one of her children, letting him live with her to help out with her seven young children. The guilt she felt must’ve been unbearable. Her and Robert’s relationship was infamous for being the supreme Romantic relationship, both composing and playing together. Robert had loved Clara greatly, but she wasn’t allowed to see him in the asylum, leaving her no one but Brahms to rely on. Neither of them knew what to do.

The situation changed, however, when Robert mentally declined and suddenly died in the asylum in 1856. Clara and Brahms were now free to be together, to be married. However, after they went on a trip to Switzerland to sort everything out, Brahms went to Hamburg, and Schumann returned home, alone. She wrote in her journal that ‘it felt as if [she] were returning home from a funeral’. No one knows what they said to one another while they were there, but her daughter Eugenie