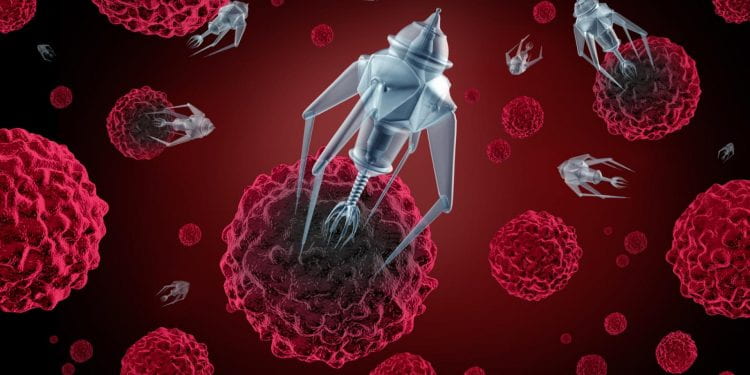 How could nanotechnology helpful in treating cancer?

Cancer is a leading cause of death around the world with roughly 12.7 million people a year discovering they have the disease and 7.6 million people dying from it. It is a group of diseases characterised by an uncontrolled division of abnormal cells in a part of the body. So far there has been no ‘cure’ for this disease only treatments which can put people into remission (meaning there are few to no signs of cancer in the body) or complete remission (there aren’t any detectable signs of symptoms of cancer). Even after this, cancer cells can still remain undetected in the body and come back which, sadly, is the case with most people. Medicine and technology, however, are advancing all the time and the possibility of finding a cure is not too far in the distant future; Nanotechnology being a prime example. 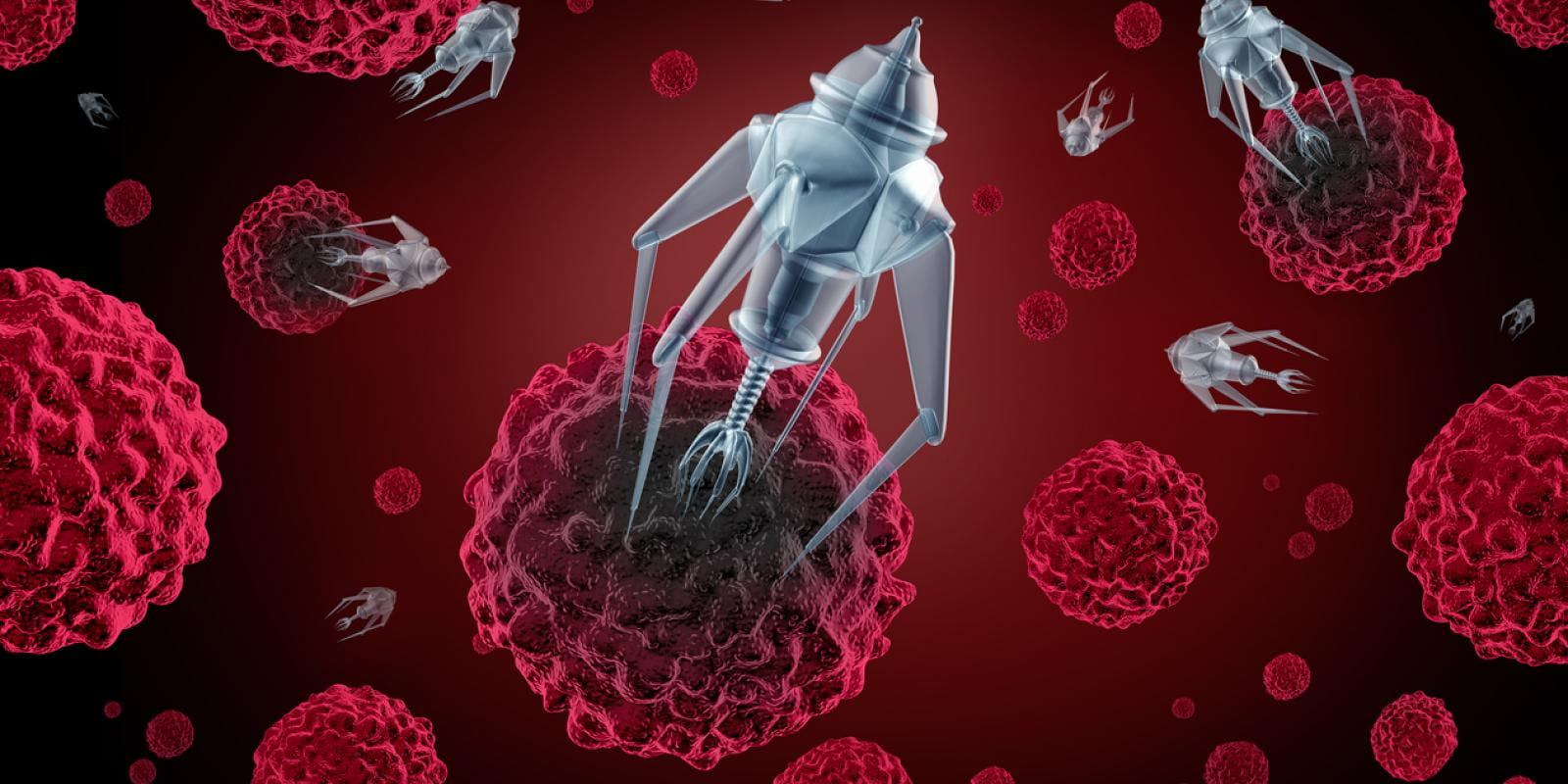 Nanotechnology is the science and engineering of controlling matter, with dimensions and tolerances of less than 100 nanometres, especially the manipulation of individual atoms and molecules. It can provide technical control and tools which have the potential to quite drastically change how we diagnose and treat cancer. Currently, when it comes to the use of nanotechnology for diagnosis and treatment it is still very much in the development phase. There are, however, many nanocarrier-based drugs available as well as several more nano-based therapeutics in clinical trials. The application of these are used to improve pharmacokinetics (the branch of pharmacology focused on the movement of drugs within the body) and in reducing systemic toxicities of chemotherapy through selectively targeting and delivering anticancer drugs to tumor tissues.

The size of nanotechnology allows it access to many places in the body which provides researchers with the opportunity to study and manipulate macromolecules (molecules containing a very large number of atoms, such as proteins) in real time and during the earliest stages of cancer progression. A good example is the blood-brain barrier (BBB)-a dangerous tissue barrier for drugs and nanoparticle delivery. It’s a semipermeable membrane separating the blood from the cerebrospinal fluid and acts as a physical barrier in the central nervous system (CNS), stopping toxic substances from entering the brain. This, however, leads to medicines trying to eliminate cancerous brain tumors from entering as well. A lot of time and research has gone into attempting to overcome the BBB for drug delivery and the multi-valent feature of nanoparticles (represented more than twice in the somatic (body’s chromosome number) makes nano-carriers appealing when it comes to designing BBB-crossing delivering strategies. This active tumor targeting process using nanotechnology could prove to be very useful when it comes to treating brain cancer.

In this current time, the most effective form of treatments for cancer are cancer therapies which are therapies used to kill any cancer cells that may remain in the body even after primary treatment, in order to reduce the chances of the cancer coming back. These therapies are limited to surgery, radiation, and chemotherapy which are all methods that come with risks such as possible damage to normal tissues or incomplete elimination of the cancer. Specially designed nanoparticles offer the opportunity to deliver medicines like chemotherapy straight to the tumor, achieving high accumulation within it, preventing any of the healthy tissues around it from being damaged in the process. The passive localization of many drugs and drug carriers due to their extravasation (natural flow from the vessel) through leaky vasculature (named the Enhanced Permeability and Retention [EPR] effect) works extremely well for tumors. As tumor mass grows quickly, a network of blood vessels has to expand simultaneously with it, as tumors rely on capillaries to provide them with the necessary nutrients and a good oxygen supply to its cells. This results in vessel walls with large pores (40 nm to 1 um) which allow fairly large nanoparticles to extravasate into tumor masses. Since these rapidly growing tumor masses lack a functioning lymphatic system it further enhances the accumulation of nanoparticles. These particles carry surface ligands (ions or molecules that bind to larger molecules) to help in the active targeting of particles to receptors present on target cell or tissue. Through the EPR effect, nanoparticles larger than 8 nm achieve higher intratumoral accumulation. Most of current nanomedicines when dealing with the treatment of solid tumors rely on high drug accumulation from the EPR effect to improve treatment efficacy.

Nanotechnology, as well as having the high chances of being able to prevent cancer, also has the potential to detect cancer at a much earlier stage by finding small changes that occur in only small percentage of cells and even potentially generate completely new, more enhanced and effective therapeutic agents. Nanoparticles are already on the market in many medical screens and tests but for cancer, nanodevices are still being looked into for the capture of blood borne biomarkers such as cancer-associated proteins, circulating tumor cells or circulating tumor DNA. Nano-enabled sensors have the ability of high sensitivity, specificity and multiplexed measurements. Already having been looked at, nanoparticles are being developed to act as molecular imaging agents, having the ability to report on the presence of cancer-relevant genetic mutations or the functional characteristics of tumor cells. You can also have bioactivatable nanoparticles and these change properties in response to factors or processes within the body and ac as dynamic reporters of in vivo states and can provide both spatial and temporal information on disease progression and therapeutic response.

Another method which has the potential to cure cancer with the use of nanotechnology is Nano-enabled Immunotherapy. It involves looking at nanoparticles for the delivery of immunostimulatory or immunomodulatory molecules alongside chemo or radiotherapy or also as aids to other immunotherapies. Scientists are looking into designing nanoparticle vaccines to increase T cell response to eradicate tumors through simultaneous delivery of antigen and adjuvant (a therapy applied after initial treatment for cancer to suppress secondary tumor formation). Molecular blockers of immune-suppressive factors can also be co-encapsulated in nanoparticle vaccines to alter the immune context of tumors and improve response. Currently in a Phase I clinical trial is the use of nano particles to capture antigens from tumors following radiotherapy to create patient specific treatments.

Of course, as with any powerful tool like nanotechnology, a lot of research goes into ensuring they are developed responsibly for cancer applications. The National Cancer Institute’s (NCI) ‘Alliance for Nanotechnology in Cancer’ work on research and testing as with any new technology, its safety is being continuously tested. To ensure that potential risks of nanotechnology are thoroughly evaluated, the Alliance make the services of its Nanotechnology Characterization Laboratory (NCL) available to the nanotech and cancer research communities. To date, the NCL has evaluated more than 125 different nanoparticles intended for medical applications. Furthermore, the NCL works closely with the U.S. Food and Drug Administration (FDA) and the National Institutes of Standards and Technology (NIST) to come up with experiments that are relevant to nanomaterials, to validate these tests on a variety of nanomaterial types, and to explain the reasoning being their methods to the nanotech and cancer research communities.

In the end, we can conclude that the use of nanoscale materials (nanotechnologies) and their potential to help cure cancer, comes down to their ability to be readily used and edited; their ability to act as the therapeutic, diagnostic, or both; their ability to passively accumulate at the tumor site, to be actively targeted to cancer cells and finally, their ability to act as drug delivery vehicles across biological barriers. The potential health risks for using nanotechnologies must be carefully studied in order to be able to continue and make big strides in our understanding of this field of science but when its safety is proven, nanotechnology willffer our society significant benefits such as for cancer research, diagnostics, and therapy.