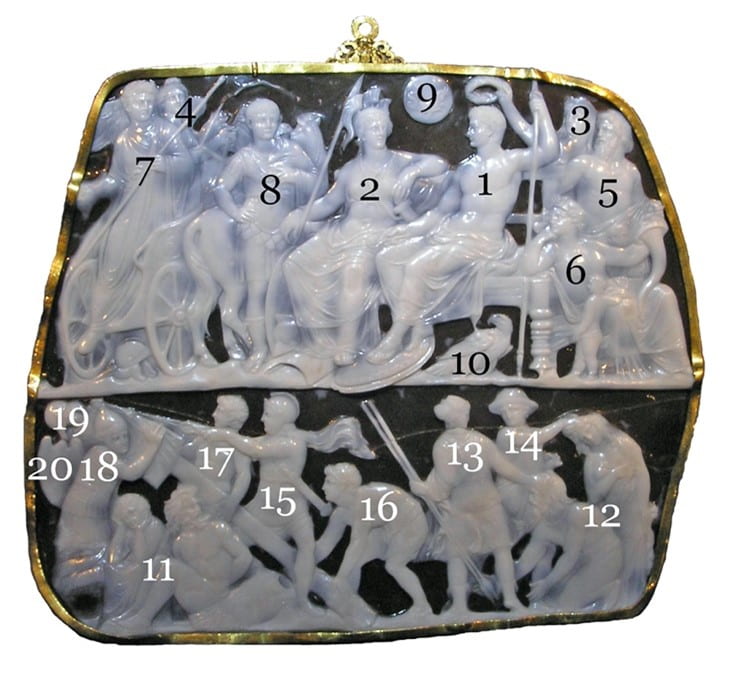 The Gemma Augustea by Kaisa Middleton

Recently, as I was researching for an essay about associations between ancient politics and art, I came across a piece that I found fascinating. Regrettably, it didn’t make the final cut of my essay, which is why I’ve decided to make it the topic of this blog. The item itself is too intricate and intriguing not to write about. The piece of art in question is the Gemma Augustea, Latin for the gem of Augustus, who was the first emperor of Rome, coming to power after the assassination of Julius Caesar, who was his adoptive heir. Augustus’ story, in reality, is not nearly that simple, but is too long to include in a blog. However, some elements of it are explored on the gemma.

The gemma itself is an engraved stone in a cameo fashion. It is made from double-layered Arabian onyx and is 190 mm tall and 230 mm wide. It is generally attributed to Dioscurides, and is dated to the second or third decade of the 1st century AD. The double-layered nature of the stone is what creates contrast between the figures and the dark background they stand against. Who owned the stone when it was made is unclear, but there are theories. For example, as I shall discuss later, Augustus is portrayed as a god on it. If the gem was made in Augustus’ lifetime, it is likely then that it was a gift for a wealthy provincial family. Despite being remembered as the divine Augustus and deifying Julius Caesar and therefore himself, Augustus did not allow himself to be worshipped as a god within Rome. Or perhaps the gem belonged to a close friend of his court. The answer is unclear, but the simplest solution is to believe the gem was carved in Augustus’ lifetime- that way, one doesn’t have to question the identity of some of the figures on the stone. Nowadays, the gemma is kept in the Kunsthistorisches Museum in Vienna.

What I found most interesting about this stone is how each figure has a story to tell, whether that story is told by the position they are in, what they are doing, or where they are in relation to another figure. I’m going to make an attempt to tell the story of the entire Gemma Augustea using a helpfully numbered picture I found online. (Credit: By Dioskurides (?) – Image: Kunsthistorisches Museum Vienna June 2006 031.jpg and based upon en: Image: Gemma Augustea2.jpg, CC BY 2.5)

That has hopefully given a comprehensive account of the Gemma Augustea and created a sense as to the huge depth of meaning that art in the ancient world could have. The art of Augustan Rome is particularly fascinating, as propaganda was essential to his regime. If you are at all interested in seeing more, two very famous examples of art from Augustan Rome are the Ara Pacis (altar of peace) and the Prima Porta statue of Augustus. The original of the latter is lost to us, but there are plenty of copies. What is particularly fascinating about the gemma though, and is partly why I wrote about it instead of the other two examples just given, is the fact that all that depth of meaning and positive representation of Augustus and effort to show how wonderful he was as an emperor is not in a huge piece of public art. It is a gift for some rich family or confined to the emperor’s private collection. It just goes to show what an interesting time Augustus’ was for art and culture, a time that is still worth exploring c.2000 years later.