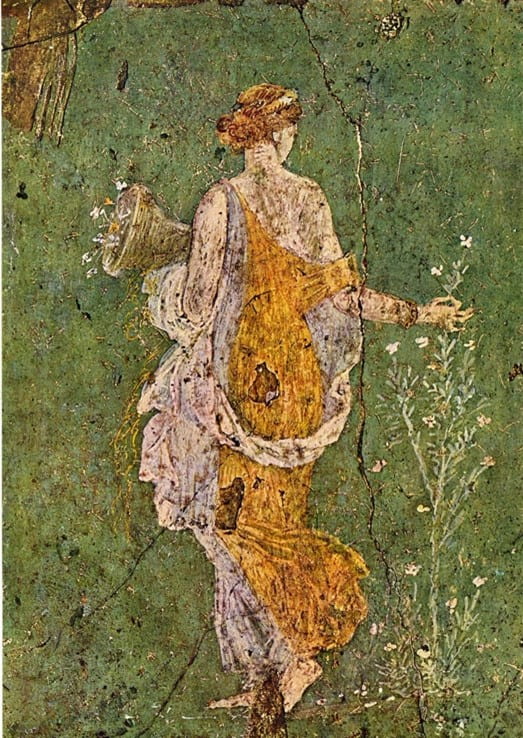 Pompeii is famed across the globe for its remarkable preservation, amusing graffiti, and lewd paintings. That said, if one visits the town, and a splash of colour greets the eye on entering a domus, the most we get out of it is usually marvelling at the paint’s vibrancy. The plethora of wall paintings across Pompeii is usually what enthrals tourists the most, and yet, these works of art are not usually regarded in any detail further than their aesthetic value. This is of course a valid way to view art, but why is this?

Ancient art is incredibly difficult, if not impossible, to access in any great depth without contextual knowledge of myth or history. This frustrates many people of the modern age, perhaps due to a general view of art as something pretty to adorn a wall, rather than something to make a statement on myth, politics, the piece’s owner, etc. Of course, more modern art does often address issues deeper than the canvas, but for the most part, the average person will buy a painting for their wall because it goes with a colour scheme, not because it represents them or their favourite mythical episode.

To aid with this gap in common knowledge, I will be looking in depth at a few Pompeian paintings, with the hope that any reader who one day visits Pompeii and the National Museum of Naples, would feel some semblance of (at the very least) recognition!

Perhaps one of the most recognisable wall paintings from Pompeii is this one, The Portrait of A Girl, which now resides in the Naples National Museum: 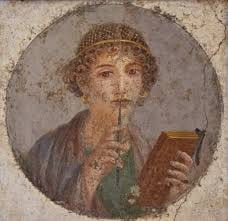 This is a medallion in a style that was very popular in Pompeii- the depiction of a head or bust. The person represented could be mythical, historically significant, or less often, an average citizen of Pompeii. This girl’s portrait suggests that she is intelligent, calm, and rather innocent. Her hair is retrained in a gold net, and she wears simple jewellery. The muted, gentle colours in her clothing and in the background create the calm sense of the painting, and her pose with the stylus pressed upon the lips in thought over a tablet is the conventional one used by painters to show education. It is debated whether the girl depicted is the Greek poet Sappho, most well-known for her love poetry about other women, or simply a citizen of Pompeii. There is a distinct lack of physiognomic individualism in this portrait, which seems to suggest that the subject is the former, and yet, one must also consider that the artist would have wanted to paint his subject in the most flattering way possible, and if that meant losing a touch of accuracy for larger eyes and more well defined lips, then so be it. Her pose doesn’t quite seem to evoke the passion of one calling upon the Sapphic muse. Also, to me, the presumption that this girl is Sappho seems to come from a place of simply not knowing who else it could be, and lazily labelling any woman who could possibly be capable of thought as Sappho. The portrait was discovered in 1760, so I think that this is a reasonable analysis of quite how this erroneous identification was made.  As such, my preferred interpretation is one of portraiture.

Another very famous Pompeian painting is the one of Terentius Neo and his wife: 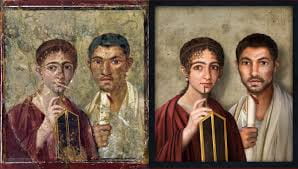 Immediately, one notices the similar stance of the woman in this painting to the depiction of the girl with the tablet and stylus in the last picture. In this portrait, we see a baker and his wife, shown as equal in status and flawed, both rare things to find in ancient art. They are Terentius Neo, baker and man of the people, and his wife. He holds a rotulus, a scroll, indicating education and involvement in public events, and the woman holds a stylus and tablet, indicating her education. Their features are far from the classical ideal, which adds great character to the portrait. There has been some doubt as to the identity of the man shown here (sometimes identified as Publius Paquius Proculus), but never any doubt as to the fact that this is a portrait of two very real citizens of Pompeii. We know the identity of the man due to an inscription on the front of the house the painting was discovered in, and we know his profession thanks to the adjoining bakery. The physiognomic realism in this portrait is fascinating, and the idea that one is staring into the eyes of a couple that lived thousands of years ago is awe-inspiring.

Now that we have looked at some portraiture, it is high time to regard some mythological subjects. Not particularly famous, and yet utterly exquisite, I would like to share one of my favourite paintings of all time, from Stabiae (a town close to Pompeii), Primavera:

Now, clearly this is not a difficult painting to access without prior knowledge of myth, but here, I would like to demonstrate that ancient paintings don’t have to be woven like tapestries of great meaning and significance. Some, like this beautiful depiction of spring, are simply meant to be beautiful. Ars gratia artis, if you will. The cool green background evokes the sense that this wistful figure wanders the fields, and her basket shows how she has collected flowers on her way. Without stopping, she delicately pinches the stem of some tiny white flowers to take with her of her gentle journey. You can see how the painter has tried to show the daintiness of this pinch in the odd contortion of her hand. Despite the slight anatomical anomaly, the gesture retains grace. Her clothing is draped without care, not in a sloppy way, but in a comfortable way, the folds of the soft yellow and white cloth rippling in a gentle breeze. Her hair is loosely tied back, and her feet are bare, as if to truly feel the grass underfoot. Notice the way her head is turned away. Granted, this could be the laziness of a painter who desperately doesn’t want to attempt a face, but I doubt someone who could paint flowing fabric so masterfully would struggle with a few features. This lack of attention on the viewer of the painting creates motion and vivacity, as if she is a living girl in a green field, oblivious to passers-by as she simply goes about on her merry way, picking flowers. I adore this painting, in all its grace and beauty, and the idea that I’m looking at something someone found equally exquisite an extraordinarily long time ago is again, incredible.

One final painting, also mythical, but more complex to contextualise. I would like to approach the painting from the perspective of someone who has never seen it before, so as to demonstrate how we can divine exactly what the painting shows, and so I won’t yet reveal its title: 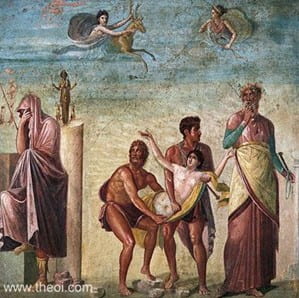 This rather dramatic painting is fittingly from the house of a tragic poet. Our eyes are first drawn to the bright, bare body of girl in the middle. Her eyes are concerned, and her arms raised in what looks like supplication. At this point, one must try and think of a worried girl being dragged away against her will in myth, but unfortunately that doesn’t narrow it down too much, so we must look further. Her arms are raised to the heavens, towards two figures in the clouds we must assume are divine. One runs with a golden stag, a motif seen with Artemis in myth, and another is a female who we can then presume to be Artemis. So now, we know this myth involves a distressed girl and Artemis, some may see where it is going, but we will continue. The two figures dragging the girl are very well muscled, perhaps suggesting that they are soldiers. On the left, a woman (it has been said to be a man, but to me the figure looks feminine) grieves and averts her eyes in despair, her body entirely covered and yet clearly contorted with sorrow. On the right, a man who seems slightly anxious is clothed in sacerdotal robes. Religious icons are also visible near the woman. The whole thing appears to be set on a beach, the sandy floor melting into a watery blue towards the background. So, distressed girl, religious icons, sacrifice, grieving woman, warriors, Artemis, beach. If you know your myths, you’d be able to recognise the sacrifice of Iphigenia. The warriors are presumably Odysseus and Achilles, the girl Iphigenia, the woman her grieving mother Clytemnestra, and her father, forced to sacrifice her for favourable winds, Agamemnon.

These paintings are famous, and personal favourites, but there are many more out there to look at. I hope that I have opened people’s eyes to the beauty of ancient art and shown that when you push past the fear of inaccessibility, a world of beauty, grace, and excellent art is revealed to you.