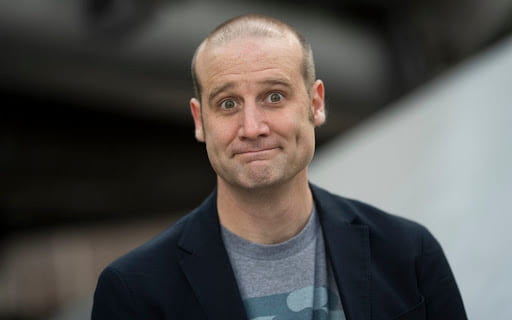 What happens when Maths goes wrong? Matt Parker’s lecture at the Royal Institute.

Matt Parker is probably my favourite mathematician. As a former maths teacher turned ‘stand up mathematician’, he’s spent the last few years trying to achieve his goal “to get more people more excited about maths”. One description of him, given by Adam Rutherford on the back of Matt’s first book, says “Matt Parker is some sort of unholy fusion of a prankster, wizard and brilliant nerd – clever, funny and slightly naughty”. That has stuck in mind since I read it and I am reminded of it with every video, podcast, book or story with him I see. From his YouTube channel, Stand-Up Maths, to a government petition, everything is approached with enthusiasm and a sense of humour. He has written two books, ‘Things to make and do in the fourth dimension’ (I have that one), and ‘Humble Pi’ which was a #1 Sunday Times Bestseller as well as the book that inspired the particular Royal Institute Lecture I plan to talk about.

“What happens when Maths goes wrong?”  is one of the lectures he gave at the Royal Institute (Link here: https://www.youtube.com/watch?v=6JwEYamjXpA ) with the version uploaded to YouTube having over 1.7 million views. Given how many times I have re-watched it, I am sure I’m responsible for at least 50% of that. Contrary to what the title of the show might lead you to believe, the talk itself is not all about extremely difficult maths done wrong and the consequences of this; but rather what happens because of simple mistakes, not thinking things through, or just maths behaving in a way that’s unexpected. Throughout the talk he gives many amazing examples, from faulty art work to falling rockets, so I have picked out a few of my favourites.

The first example I will talk about happens to also be the first one given in the show and falls into the category of a simple mistake made due to not being thought through. Actually, he gave quite a few examples of the exact same mistake, so I am going to use the one we probably all have in our pockets, the two-pound coin. The two-pound coin is designed to show different eras of mankind with the inner-most ring representing the Industrial age with a series of cogs. For cogs to be able to turn there must be an even number of them, as they go clockwise anticlockwise and so on; however, the two-pound coin has 19 cogs, meaning that it doesn’t work.  Arguably this doesn’t matter, it’s just an artistic rendition but interestingly enough, the original design submitted actually had three more cogs, so it would have worked. I guess it’s up to an individual to decide whether the artistic intent or the realistic accuracy matter more to them.

The next one is probably my favourite example in the whole show. In 2010 a news article (link here, https://www.dailymail.co.uk/sciencetech/article-1240746/Prehistoric-sat-nav-set-ancestors-Britain.html ) was released about research done by Tom Brooks who analysed the locations of ancient monolithic sites and concluded that the ancient Britons had made these sites as an ancient sat nav. He created a map showing that all the sites were linked by isosceles triangles which he claimed allowed our ancestors to easily navigate to country without a map. He went on to say, “Such is the mathematical precision that it is inconceivable that this work could have been carried out by the primitive indigenous culture we have always associated with such structures.”. This led to claims of ancient highly intelligent planners and surveyors years before the invention of geometry in Greece. It also led to many conspiracy theories of extra-terrestrial intervention. Having seen this article Matt Parker decided to ‘check’ this research. He found the locations of some ‘ancient sites’ himself and proceeded to try and find similar links between the sites to the same level of precision as Brooks. He succeeded. However, in his own words “I wasn’t analysing ancient monolithic sites, I’d looked up the ancient Woolworths stores”. So, should we put on our tin foil hats and ask as the Guardian did, “Did aliens help to line up the Woolworths stores?” (link: https://www.theguardian.com/science/2010/jan/16/ben-goldacre-bad-science-aliens-woolworths). Well, luckily there is an explanation that does not involve little green men and teaches a lesson that is very important in this age of fake news. It boils down to what data is shown and what is left out. Its very tempting, and very easy to cherry pick and manipulate data to show what you want it to, and that is exactly what happened here. In both cases, any data that did not fit the pattern was not included. In the original article 1500 sites were analysed, yet there were only 13 sites on the map. I think it is put best by Parker himself, “You can find any pattern you want, to any level of precision you want if you’re prepared to ignore enough data”. In my opinion, that is something we should all keep in mind.

Coincidence, fate or statistics, the next example shows something rather unexpected. In 1980 a photo was taken in Disneyland showing a girl named Donna and her family. Years later when looking back at old photos with her fiancé Alex, he would notice something interesting in the background, him and his father. An amazing coincidence, and definitely a story and photo that will be brought up at the wedding, but is it fate or is it just statistics?  With the number of photos taken every day and the amount of people in the background of all those photos is it really that surprising that it happens?  There are probably thousands of photos like these and who knows, maybe you have one and you just don’t know it yet.

The next example is of a trick Matt Parker played on the audience. I fell for it, so I wonder, did you? In order to choose which topic he was going to discuss Matt brought out a spinner with different colours for each topic. At various points he would call down a volunteer who would spin the wheel to see what he would talk about next. The first time it spun it landed on green which was probability and he talked about coin flipping. The second time it spun it also ended up on green and he talked the 2010 article. The third time it spun it ended up on probability again and he spoke about the picture. What’s the probability it landed on probability every time on the first go? For those less gullible and trusting than I am most likely got suspicious after the second time. It turns out that it was a trick on those watching on YouTube as while editing the talk they removed all the times the volunteer spun the wheel until it landed on green. As he said when he revealed what was going on, “this is a lesson on not believing everything you see on the Internet.”.

The last example is the most expensive mishap on the list, the Ariane 5 rocket. In 1996 the Cluster program launched on the Ariane 5; it was only in the air for a few minutes it came crashing down, destroying 10 years of work and $7 billion USD.  The cause of this catastrophic failure? A single number. On the Ariane 4, data was collected from sensors, turned into useable navigation information and fed into the navigation system. To do this they had to allocate a certain amount of memory, either 16bit or 64bit. In order to save processing power, they decided to work out which sensors would never produce over 16bit and then programme it to only check those that could go over 16bit.  There were no issues with this on the Ariane 4 and they copied this system onto the Ariane 5 so why did five crash? They didn’t double check the sensors. Due to the different take off conditions one of the sensors that they hadn’t programmed to be checked suddenly needed more than 16bit memory and so it overflowed and crashed the system. That wouldn’t have been too much of a problem if it hadn’t tried to send a crash report which was then mistaken for navigation data. This led to the rocket trying to correct its already correct course, causing it to go off to the side, tear itself up and have to self-destruct. The fact that this could have all been avoided by double checking is definitely something that is going to stick in my mind.

Overall, I really enjoyed watching this and would highly encourage others to do so. It’s interesting, educational and fun and there is so much more that I didn’t put here. There are quite a few lessons that I’m taking away from this and I hope you are too.