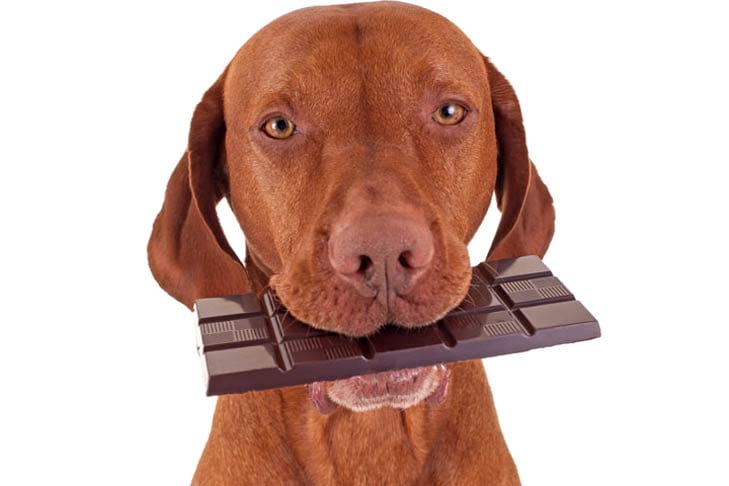 It’s a well-known fact that dogs are allergic to chocolate, along with many other common human foods that may seem harmless, but does anybody ever question why? Dogs can die from ingesting too much dark chocolate, grapes, coffee beans, onions, garlic and tea, but what exactly is it that can kill them?

The chemical in chocolate that is poisonous to dogs is called theobromine, an organic compound found in the cocoa plant. It has a similar structure and function to caffeine, having pretty much the same effect in the human body. Cocoa powder can contain anywhere from 2-10% theobromine, and it is more prevalent in dark chocolate than in milk chocolate. It can also be present in the body as a product of the metabolism of caffeine, which ‘breaks down’ to form theobromine and two other organic molecules.

Many animals, including dogs, metabolise (use) theobromine much more slowly, which allows it to poison the body. In humans it is metabolised too quickly for it to have an effect. Theobromine is toxic because it inhibits phosphodiesterases, enzymes which break down phosphodiester bonds. These bonds are mostly known for being the bond between DNA nucleotides in the double helix strand, but in this case, the enzymes (specifically cyclic nucleotide phosphodiesterases) control the levels of certain messengers in the brain. Without the proper levels of these messengers, called 3-5 cyclic phosphates, the brain cannot function properly. Theobromine predominantly affects the central nervous system, the cardiovascular system and the respiratory system, which is why when a dog eats too much chocolate, the first symptoms of theobromine poisoning are most often shortness of breath and muscle twitching, followed by cardiac arrest, which is the biggest cause of death among those suffering from theobromine poisoning.

Theobromine also antagonises adenosine receptors (it bonds to them instead of the adenosine). Adenosine is a common chemical in the body with a number of uses, one of which being regulating heart rate. This is why it’s used by people suffering from a disease called supraventricular tachycardia, where the heart beats faster than its supposed to. It is also important in preventing further tissue damage in response to an attack on the cells. Often the receptors of adenosine have the same effect as phosphodiesterases, controlling and regulating cyclic phosphates, so the effects of those receptors’ antagonism is very similar to the inhibition of phosphodiesterases.

Grapes can be even more dangerous to dogs. Just one grape or a handful of raisins can cause kidney failure in small to medium sized dogs. For large dogs, all it takes is a few more. The scariest part about the danger grapes pose to dogs is that the cause of this kidney failure is completely unknown. Despite lots of research, scientists could not identify what chemical in grapes was so toxic, causing dogs’ kidneys to give out after a very short period of time.

Onions and garlic contain a chemical called N-propyl disulphide, which is the substance responsible for causing the eyes to itch when you cut through an onion. Other plants in the Allium species, such as leeks or chives, also have toxic effects on dogs due to the same chemical. N-propyl disulphide acts as an oxidant and dogs are much more susceptible to oxidative damage than humans are. The chemical will bind to canine red blood cells much more effectively than human due to a difference in the structure which gives them more binding sites for chemicals such as oxidants. The presence of the chemical on the cell will result in the body identifying the cell as a foreign pathogen, marking it for destruction by macrophages via phagocytosis. The process of breaking down red blood cells is called haemolysis, and too much can lead to anaemia, a deficiency in the number of red blood cells or amount of haemoglobin. Anaemia affects roughly a third of the human population and kills thousands of people a year. It is just as dangerous for dogs and is a common cause of dogs, especially when induced by the ingestion of certain chemicals, such as N-propyl disulphide.

Caffeine is a very similar chemical to theobromine, in fact another name for it is methyl-theobromine, meaning their chemical structures differ by only a methyl group (a carbon and three hydrogens, the simplest group in organic chemistry). Because of this, it has a very similar effect in the bodies of both humans and dogs. Due to being heavily diluted with water, licking up spilt tea or coffee has very little negative effect to dogs, but dry coffee beans, powder or tea leaves are just as toxic as chocolate. Its poisonous effect on dogs is less known than chocolate because the instances of dogs eating pure coffee beans are much lower. This is simply due to them being a less commonly owned product than chocolate in the average household.

In conclusion, foods that might be commonplace in your family home could actually cause serious harm to your dog, so it is vital that you check whether or not the product is safe or not, and make sure it is out of reach. Even the smallest amount of dark chocolate or raw garlic could make your dog seriously ill, simply because their bodies can’t break it down fast enough or respond effectively.