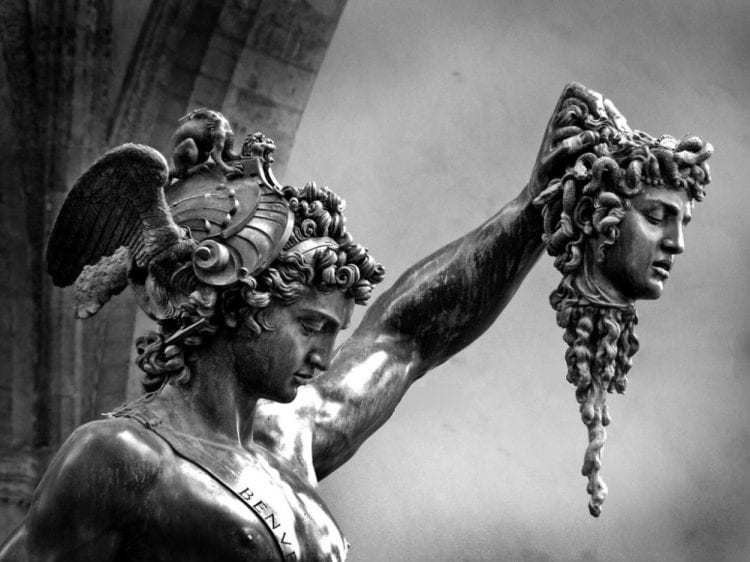 The 16th Century Diss-Track to the Greatest Sculpture of All Time.

Italy. Florence. Piazza della Signoria. Loggia dei Lanzi. This square contains some of the most valuable pieces of art from the Renaissance era. True geniuses walked the streets, mercenaries producing artefacts of the finest calibre and receiving pay checks courtesy of the dirtily wealthy Medici family. With this much talent in such a localised area, it is no surprise that competition was incredibly high, with the egos of men who are still recognised to this day for their achievements, frequently clashing through the medium of art. It is thus, that our picturesque square in the heart of Florence, becomes an arena for expressive combat, in competing sculpture. Our gladiators couldn’t be more different: one, the artist accountable for the ceiling of the Sistine chapel, whose name has transcended time (adopted even by an animated reptile) and the other seldom heard of, and yet described by Leonardo Da Vinci himself as “the greatest goldsmith of whom we have ever heard”. The former, Michelangelo di Lodovico Buonarroti Simoni, arguably the greatest artist of all time. The latter, Benvenuto Cellini, was a brilliant young mind and craftsmen, and the original mischievous teenage genius. Michelangelo’s question was The David, and Cellini’s answer was the Perseus and the Head of Medusa. 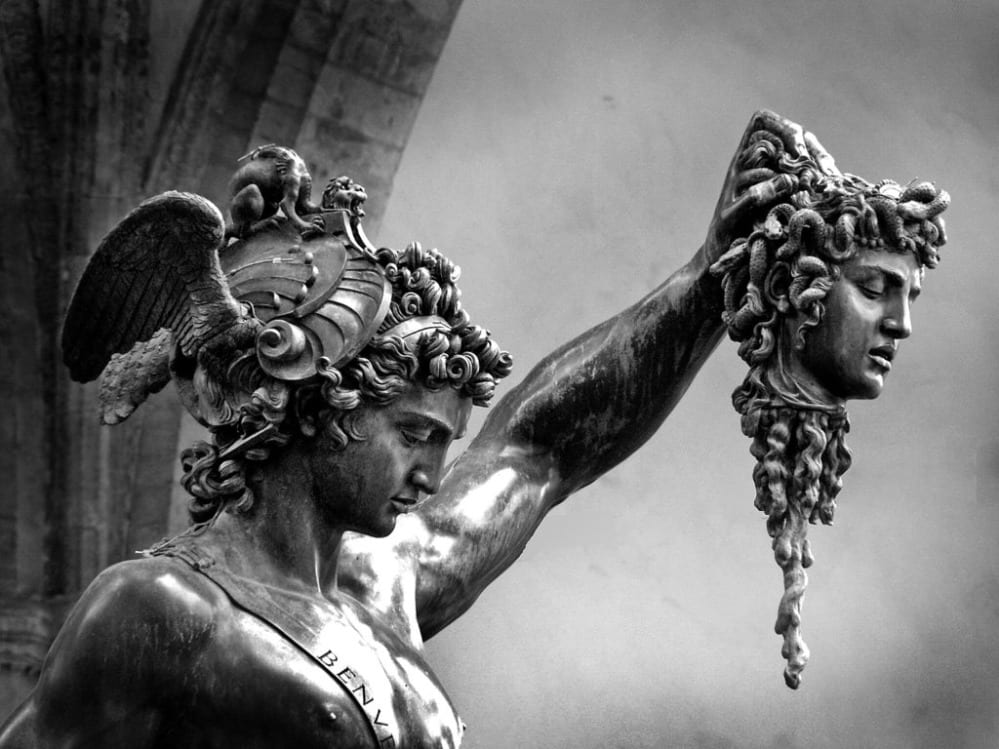 In 1504 Florence was governed by a Republic, with bimonthly elected officials sharing their powers, ultimately, with the people. The dirtily rich Medici family had ruled up until 1494 almost tyrannically, and upon their defeat, the people rejoiced. Michelangelo’s name already held great renown, aged 26, and yet he wished to permanently assert his dominance over any artist stupid enough to declare themself in the same class. And so, at the Republic’s request, he began an impossible task: to depict the biblical David from a singular block of marble. This alone (obviously) was far too easy a task for someone of his skill to partake in (almost insulting), and to raise the stakes, Michelangelo sought to find the most brittle, unworkable piece of marble in the country. Marble so delicate and rigid, that numerous other artists of the time had rejected it in mere disgust, sitting in the cathedral work yard for over 26 years. This was Arthur pulling the sword from the stone, and then moulding it into a cutlery set for his own amusement. The culmination of this was the masterpiece that is the David. Acclaimed both for its masterful artistry, and its scientifically accurate bodily proportion, the sculpture is undoubtedly the most famous artefact of its discipline. And, as an embodiment of the independent Florence, it is perfect; the figure is both intelligent, simultaneously tense, and relaxed, and against all odds defeats the enormous Palestine Goliath (or perhaps metaphorical Medici family.)

But the glory of the Republic was fickle, and in a society where wealth governed political power, Giovanni de’ Medici reclaimed power in 1512. The Republic had fallen, and to those in power, the David stood as an echo to the not so distant past, a testament to the (at the time) failed hope of the masses. The family needed to establish pure dominance, to introduce a second warrior into the battlefield in order to stamp out any flicker of rebellion. And so they called on none other than Benvenuto Cellini.

As Virgil manipulated and (arguably) improved upon the similes of Homer, Cellini wished to supplement what Michelangelo had done in The David, and he began this task by choosing to create his sculpture from one solid cast, with bronze, instead of marble (the meaning of which will be explored later). As legend has it, his assistants almost botched the whole operation, allowing the metal to clot, and it was precisely in the kairotic moment that the sculptor returned to re-melt the bronze, and revivify what was almost a tragically lost piece.

The character that Cellini chose to depict was none other than the mythical demi-god, son of Zeus and Danae, Perseus. Derived from the famous myth of himself and Andromeda, Cellini’s Perseus triumphantly holds up the head of the gorgon, Medusa. The defiant death stare sneers at viewers to this day, triumphant, as it exhibits its petrifying prize. As the observer, we stand below, utterly belittled, and insignificant, and can almost hear it, demanding for us to “look upon my works, ye mighty, and despair!” And that is exactly what it screams at its opponent, opposite.

We can interpret almost every detail of The Perseus as symbolic, for both the artist and patron. Beginning with the character itself, being a hero of the highest pedigree in the Greek mythology from which much of the Renaissance was taken, it is entirely possible that it is representative of the Medici family themselves, heroic in gleaming bronze, and holding the head of the decapitated Florentine Republic that came before. The eyes of such a head are as prominent as they are in the gorgon’s myth, and as they once turned men to stone, do they now, turn its audience into stone – including The David. Indeed, at the time, every statue that surrounded Perseus was stone, giving the effect that Cellini’s was the only living form, and essentially subjugating the population of art around it, degrading them to victims of his raw talent. Perhaps, however, the artist also selected this with a double entendre in mind. Cellini was, after all, excessively liberal for his time, and it is within the realm of reason to suggest that he was entirely conscious of one final crook in Perseus’ tale. This being, that in some versions, from the gorgon’s severed neck, Pegasus was born. Did Cellini see a new beginning, hope even for Florence, flying out from his creation?

It stands to this day, accusatory, triumphant, and a masterful testament to Benvenuto Cellini, Ancient Greek Mythology, and the turbulent politics of Renaissance Florence. And whilst The David stands preserved behind closed doors (in the Accademia), Perseus with the Head of Medusa remains open to the elements, as petrifying as the day it was unveiled.

Cellini’s Perseus With The Head of Medusa is not only a reflection of the power of sculpture – as an isolated discipline – for a predominantly illiterate population, but also, a prime demonstration of the many representations there are of characters and myths of the past – that most would consider completely anachronistic – in all varieties of form; from painting, to sculpture, to derivation in literature, music and all forms of art, they’re more present than is ostensible. Another apotheosis of this has to be Ovid’s vignette of Pyramus and Thisbe in Book 4 of The Metamorphoses, later stolen as the play within a play in Shakespeare’s A Midsummer Night’s Dream but also, more significantly, being the myth that Romeo and Juliet is based on – a play that has, in itself, permeated Western culture since, from films like West Side Story to the Dire Straits song. I suppose what this blog is attempting to begin to convey is that myths, and the characters that feature in them, have been adopted and manipulated temporarily for means completely disparate from their original purpose, and through these adoptions have cropped up in history over and over, to the point where we’re saturated with them without even knowing.

Classics is all around us, one just needs to know how to look.

With a better knowledge of the civilisations that our literature, architecture, science, and philosophy are spawned from, can we begin to truly appreciate our own culture, and better understand it.