MG discusses Blade Runner and what makes us human.

The topic of humanity has been discussed for generations, with many arguing that our organic form is what makes us human – whilst others argue that our ability to empathise, to feel is what lends us our humanity. Many films discuss the question, “what it means to be human?” whilst drawing parallels between the mechanical and the organic. Blade Runner is a film centred around sentient robotic life and the question of whether “machines” can ever be classified as people, with humanity. Films which discuss robotic life are incredibly interesting as they discuss questions of whether AI is good for humanity but, also, the existential view of the human condition.

Blade Runner is a loose adaptation of the novel by Philip K. Dick titled “Do Androids Dream of Electric Sheep?” and the movie centres around the protagonist Rick Deckard in Los Angeles, 2019, a retired law enforcement officer/blade runner tasked to retire a group of four replicants who illegally stole a ship and came to Earth in search of their creator. Deckard, having visited the Tyrell Corporation for himself, meets Rachael who is unaware she is a replicant and the two form a bond as he shelters her. The leader of the replicant group, Roy, manages to infiltrate Tyrell corporation and learns, from Tyrell, that his lifespan cannot be extended. Deckard ends up retiring three out of the four illegal replicants and, in the end, Deckard and Roy engage in combat, with Roy ultimately sparing Deckard before Roy dies as his lifespan has depleted completely. The film “Blade Runner” has around 7 different versions, I will be focusing, primarily, around the 1982 theatrical release and the 1992 Director’s cut of the film which includes an extra scene, the unicorn dream which is exempt from most versions of the film; as it introduces some more interesting questions about the nature of the protagonist, and therefore his humanity. 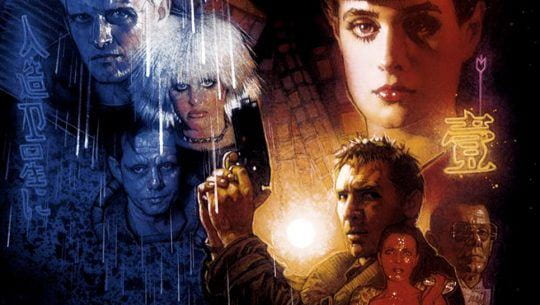 The society in which humanity has found itself has become technology-driven and capitalistic. This is shown via the treatment of the replicants by the hands of the humans, how they have become slaves for labour with no freedoms nor rights. The first question discussed by the film is “what does it mean to be human?” and whether we can ever truly distinguish ‘real humans’ from the replicants. Replicants are described to be artificial intelligence but they are so advanced that they are like a human in every single way and nearly completely unrecognisable from their human counterparts. So, what gives us our ‘humanity’ or makes us human – our psychical form or our mental ability for emotions or empathy?

We can apply the enslavement and subsequent killing of replicants to Kant’s first categorical imperative of universalising your maxim (a universal law). For example: if the maxim is “replicants must be killed” then the universalised maxim is “all replicants must be killed.” Despite this, the answer to the question of whether it is morally right to enslave/kill them is not answered here as it is incredibly difficult to tell replicant from a human. Therefore, if we change the universalised maxim to “all things humanoid must be killed,” this would not make much sense as, undoubtedly, humans would be killed too. Kant makes it very clear, within the second categorical imperative, that we should never “treat a person as a means to an end only.” If we take the view that replicants are, indeed ‘human’, due to their physicality – then enslaving them in the first place is morally wrong.

The humans in the film, in particular the Blade Runners, view the replicants as not human for they are created and mass-produced, making them lesser beings. In the film’s opening text crawl, it is stated that “killing a replicant is not called execution, it is called retirement,” consequently, it is argued that killing a replicant, no matter how humanoid it may be, is not taking a life. The divide between replicants and humans is further seen with what pronouns are used for them when Deckard first discovers Rachael is a replicant he asks, “how can it not know what it is?” This pronoun is, generally, used to describe objects and animals and, therefore, places the replicants at a level below humans. This is more evident when replicants have been enslaved, for years, for slave labour – perhaps manufactured only because they resembled humans by a man who wanted to play God, Tyrell. Furthermore, when meeting with Tyrell, Deckard states “replicants are like any other machine. They’re either a benefit or a hazard,” therefore, in his eyes, their only role is to fulfil their purpose and nothing more. Despite this, some would argue that physical appearance, alone, is not enough to indicate whether someone is human.

However, in the film, there is a juxtaposition between the replicants and the humans. Replicants, who have a limited lifespan of four years due to a built-in fail-safe, so they do not develop complex human emotions, are shown to be more empathetic, more emotional than the humans. They feel empathy (or at least close to that) when their friends die, which can be shown when Roy learns of the deaths of Leon and Zhora but, in particular, Pris whom he vows to take vengeance from her killer, Deckard. But, Roy, in the end, spares Deckard, through the process of coming to terms with mortality, he accepts life for the way it is – a contrast to Deckard who fails to finish his job and kill the last remaining replicant. One of the aspects of the character of the replicants is that of rebellion. Roy misquotes William Blake, saying “Fiery the angels fell; deep thunder rolled around their shores; burning with the fires of Orc.” (as opposed to “Fiery the angels rose, and as they rose deep thunder roll’d. Around their shores: indignant burning with the fires of Orc.”) Here, I think it identifies the replicants as, somewhat, fallen angels that rebel against the state of the Tyrell Corporation and humanity itself as they have “fallen” back to Earth to reclaim some of their freedom.

Perhaps consciousness and, therefore, empathy are enough to tell us whether something can be classified as “human?”

Despite the quotation, “I think, therefore I am,” used by one of the replicants (Pris) in the film, René Descartes would disagree that androids could ever be regarded as humans, arguing that automatons cannot respond to things like humans can (in his Discourse on the Method). The idea of what humans have and what machines lack created the basis for the Turing test – which tests a machine’s ability to exhibit intelligent behaviour indistinguishable from a human. Within Blade Runner, the only way of being able to tell a replicant from a human being is the “Voight-Kampff Test”, as a test of emotional response or, in particular, empathy by measuring dilation in the eyes. However, an interesting question the Voight-Kampff test raises is whether the results are conclusive about telling whether a person is human or not. Since the test relies on the individual being tested showing some emotionally mature and possessing empathy, if the person being tested was not either of these two things – the test does not exactly prove whether the person was a replicant.

A key difference between humans and replicants is that humans have not been engineered as replicants have, they have a creator which determines the certain purpose for them. However, the classical theistic view of God is that He knows exactly what he will create before creating it. Furthermore, Thomas Aquinas asserts the view that consciousness is something that is intrinsic to us and is “written on our hearts,” by God and therefore God is comparable to those who engineer the replicants, or in particular, Tyrell. Despite this, if we take a standpoint without the theistic God, without a God who is likened to an engineer or a designer, humans are responsible for their actions compared to the replicants who have someone to blame for what they do.

Another key idea explored within the film is whether our memories make us human or not as, throughout the film, the idea of memories and dreams are used as a motif. The replicants are shown to have implanted memories which make them seem even more human-like. Rachael, for example, carries around a photograph of whom she believes to be her mother – until she is told by Deckard that her memories are simply implants of the memories of Tyrell’s niece. Photographs play a large role in the film; with Leon obsessing over them and Deckard’s room full of them. It seems, in a way, that the replicants are ‘playing human,’ as they project an idea of humanity onto themselves. This existentialist view is what Scott is portraying in the film. Philosophers like Sartre or Heidegger advocate that the fact that our lives are limited makes them more meaningful. Heidegger also argued that if something is striving towards an end goal that is what makes them human. This is directly mirrored by the main replicants striving for the goal of the extension of their limited lifespans. An interesting scene from the 1992 Director’s cut includes a unicorn dream which Deckard experiences which is mirrored later in the film when Gaff, the antagonistic police officer, leaves an origami unicorn at Deckard’s door at the end of the film. This puts into question Deckard’s role in the movie as this cut of the film suggests that he may be a replicant. As this would signal Gaff knew about his dreams (i.e by reading a ‘file’) just like the way Deckard knows everything about Rachael’s past and the spider outside her window. The notion that Deckard could be a replicant raises the query of the existential narrative Scott portrays in the film as the protagonist could be simply running away from the truth of his own synthetic origins. However, the dichotomy between Roy and Deckard, human and replicant, does not exactly work when it is implied Deckard could be a replicant as well.

Lastly, my favourite moment in the film is the ending ‘Tears in Rain’ monologue spoken by Roy:

“I’ve seen things you people wouldn’t believe… Attack ships on fire off the shoulder of Orion… I watched C-beams glitter in the dark near the Tannhäuser Gate… All those moments will be lost in time, like tears in rain… Time to die.”

This scene is particularly impactful as it signals Roy’s acceptance of, not only his death but his choice to save Deckard, the killer of Pris and his other friends. By the end of the film, Roy has become more empathetic than the human characters in the film, showing the dichotomy between the “real” humans who seem to feel less human than the replicants do – “More human than human,” (the motto of the Tyrell Corporation).