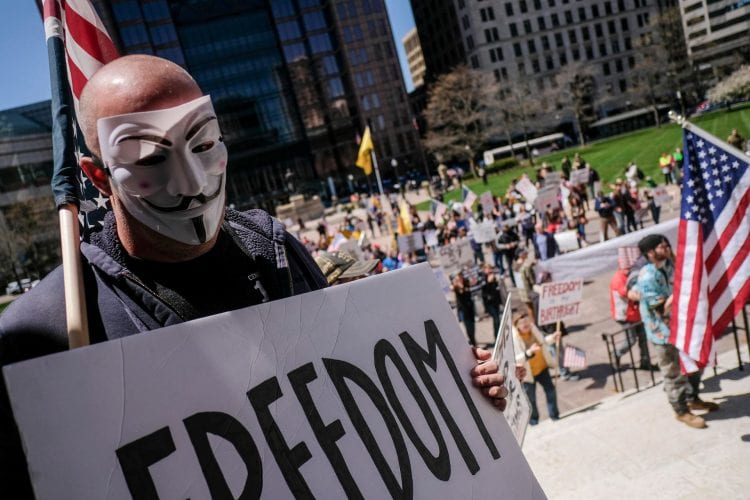 The world has been in the grip of Covid 19 for over 6 months now, each country has had to make changes systematically and radically. Most people have accepted those changes as they understand the risks of the virus to our own health and also others. However there have been some (especially in the US) who have protested these restrictions as they claim that the Government has used their power unjustified which has taken their freedom away unnecessarily. Throughout this blog I will be looking at whether there is a balance between freedom and risk, and I will be justifying how I believe that freedom must be limited to restore this balance. A great way to discover whether or not these restrictions are necessary is to compare the coronavirus crisis with another fatality which brought restrictions and limitations to many.

The 9/11 attacks were a series of four coordinated terrorist attacks by the Islamic terrorist group Al-Qaeda against the United States. As a consequence of these attacks’ freedom was also limited, some could say similarly to the coronavirus restrictions. Freedom of speech was also limited alongside that rule of law was weakened so police of states could easily arrest any suspects. Jeremy Waldron is New Zealand professor of law and philosophy and he researched if protesting against restrictions like these are actually necessarily. As a result of his research, he came up with 2 criterions of which people should ask themselves before protesting. Criteria one is, who bares the burdens? In other words, who is affected by those limitations? In early 2000s, following the disaster of 9/11, racism occurred more because people with middle eastern heritage were much more likely to be targeted with the listening in on mobile phones, interrogation and arrests. Waldron thought this was discrimination as someone who looks like you committed a crime therefore, we should limit their freedom of speech. Counterterrorism- a minority bares burdens, this made it a good reason to protest as only targeted people had their freedom withdrawn from them. In relation to coronavirus, the lockdown measures effect every single one of us therefore there is not a specific minority that disrupts freedom. The government asks all citizens to bear the burdens, and by doing so we are protecting vulnerable people from fatalities. In conclusion to Jeremy Waldron’s first criterion, 9/11 does seem like an unfair balance of risk and freedom as these limitations are more heavier on a certain race. However, the Covid 19 is completely opposite as these restrictive measures target everyone regardless of their ethnicity as everyone and anyone can be affected, and although our freedom is being exerted away from us, we are saving lives of those vulnerable people and by protesting it would become risk to the health of others and ourselves.

The second criterion is: do these restrictions actually work? And do we know they work? I believe this is definitely the most important out of the two of them because there is no point of stopping the freedom of citizens if people are unsure of the outcome. Do counterterrorism laws work? Overall, there is no clear way of stopping terrorism and the US government only restricted travel and tapping phones because they would hope it would work. Therefore, limitations were partly symbolic as the Government wanted to seem like they were doing something. In addition to this, it would be difficult to know what would happen without the limitations, also counterterrorism restriction results must be kept secret so the people making sacrifices wouldn’t know if their work is paying off or not. On the other hand, some may ask whether Waldron’s second criteria works for the coronavirus laws? Due to Covid 19 being a global pandemic there is clear scientific backing that lockdown measures do work also countries such as the UK and use countries like China as a comparison to see whether or not taking freedom from their citizens is appropriate. Also, unlike 9/11 the coronavirus stats (rising and falling in deaths etc.) are made very public, mainly to inform the people but also to reward them. By knowing the limitations are working it mentally motivates people into wanting to remain under those restrictions as they feel like their effort helps others into defeating the virus.

In conclusion, I believe that Waldron would suggest that it is just unjustified that the limits imposed against terrorism are working, therefore they cannot reduce the risk so instead they take away the freedom. There is no clear balance.  Protesting could quite rightly take place with an underlined firm reason to do so. However, I think that to protest the coronavirus restrictions is wrong, as there is so much evidence that these limitations do work with clear scientific research backing that. Also, these pandemic lockdowns save lives of vulnerable people so to protest and risk the heath and possibly lives of others would be selfish.