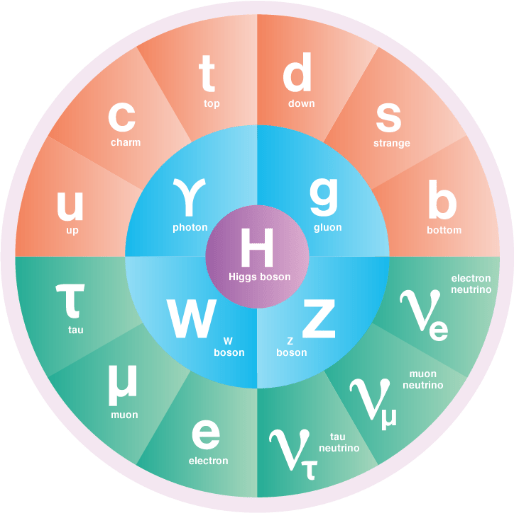 What is the Smallest Object in the Universe?”

In 400BC, a Greek Philosopher questioned what would happen if you took a piece of matter, divided it and continued to divide it until you eventually came to a point where you could not divide it anymore. This man was called Democritus, and he was the first person to use the term ‘atom’, meaning a fundamental, indivisible unit of matter.

In the present day, we now have one of the simplest and understandable theories explaining the make-up and forces of the Universe– The Standard Model. The Standard Model also covers the forces that govern how particles move, interact, and bind together to give shape to the world around us. Us humans may think a grain of sand or rice is small, however that one grain contains upwards of 500 quintillion quarks.

The Standard Model is made up of 6 quarks, 6 leptons, 4 elementary bosons, and the Higgs boson.

An electron, the first discovered unit in the Standard Model, is a subatomic particle has an electric charge of negative one. As all other fundamental particles do, electrons display properties of both a regular particle and a standing wave. Electrons do not move in a circular path orbiting the nucleus, but in a more wave-like pattern. When energy is put into the electron field, electrons exist as a wave function – a mathematical function that describes the probability that an electron is in a certain place at a given moment. The location and energy of an electron in an atom is determined from a set of 4 quantum numbers that describe different atomic orbitals. An orbital is a region of space in which an electron is most likely to be found.  There is s, p, d, f orbitals that look like this:

When l equals 1 it is describing p orbitals, which extend outwards three-dimensionally – there are three of these per energy level

When l equals 2 it is describing d orbitals which are odd looking…five of these per energy level.

When l equals 3 we get f orbitals. Seven per energy level

Whilst this is not relevant to the main question, it is important to understand how single electrons can be described and located.

Now, moving onto the leptons – particles that cannot experience the strong nuclear force.

Starting with a muon, which is a fundamental particle similar to an electron, however 400 times heavier. It has an electric charge of -1 and a spin of a 1/2. It is an unstable particle with a mean lifetime of 2.2μs. Muons are normally created when cosmic rays, which are mostly high-energy protons, strike the Earth.

There is one thing a muon does that is verification to a very important theory – Einstein’s special relativity. If a muon’s average lifetime is 2.2µs, then how can it reach Earth from the upper atmosphere, a distance of 10km? Even if a muon was travelling at the speed of light, most could only travel 1 or 2 km before decaying. This must mean that muons are under the effect of time dilation, which essentially says that the faster you are travelling, the slower time is for you. If a high-energy muon is travelling at 99.995% of the speed of light it would live for 220µs and travel at least 66km before decaying. This explains how muons can reach detectors and cloud chambers on the Earth’s surface.

Next, is a particle almost identical to the muon, called a tau (T). It also has a negative electric charge and a half-integer spin. It has an extremely short lifetime of 2.9×10-13 s, much shorter compared to the muon.

Another lepton is a neutrino, this particle has no electric charge, and like all leptons, are not subject to the strong force, but the weak force.

Moving onto quarks, an elementary particle discovered in 1964. In order for these quarks to work and make sense, they needed a fractional charge. In a proton, there are three basic quarks, two up quarks (that have a charge of +2/3) and a down quark (that has a charge of -1/3). The up and down quarks are the most common and least massive of the quarks. A neutron was found to consist of one up quark, and two down quarks. Up and down quarks along with electrons, create normal matter, strange and charm quarks along with muons, and top and bottom quarks with tau’s, are all different versions of matter.

Electrons are bound to an atom’s nucleus by electromagnetism, they are attracted to each other by exchanging particles called photons, which are quanta of light that carry the electromagnetic force. Photons have an inability to experience time or space. Furthermore, photons are massless – their rest mass is 0, therefore meaning that they can only travel at the speed of light.

The next bosons I am going to talk about are called the W and Z bosons, who carry the weak nuclear force. Fundamentally, the weak force only acts on leptons. Weak interaction plays a major role in particles decaying or falling apart.

Following this, is a boson named a gluon, which carries the strong nuclear force. To begin to understand this force, a basic understanding of quantum chromodynamics is needed. There are three quarks that make up a proton or neutron, two or one up quarks, and two or one down quarks. These quarks come in three kinds of colour charge, which refers to the three kinds of colour perceived by humans: red, green and blue. These charges don’t have anything to do with colour, it is just a way of categorizing quarks. Quarks of different colour charge exert an attractive force between one another. The electromagnetic force weakens as particles are pulled apart, however the attraction between quarks strengthen whilst under the effect of the strong force, so they always stick together.

the final particle of the Standard Model – the Higgs boson. The idea is that The Universe is permeated with an even distribution of a force-carrying particles – Higgs bosons. Particles acquire mass from interacting with the Higgs field, or Higgs particles.  Modern physicists classify mass as a force, this may sound odd as generally mass is thought to be just a ‘thing’. However, some particles, such as a photon or gluon don’t have mass, despite the photon being very similar to an electron on an elementary level. So – why does a photon not have mass and an electron does?   This is because massless particles like the photon don’t interact with the Higgs force carriers, so they don’t have mass. The electron, for example, has a type of intrinsic quantum spin, which is called chirality. This can either be clockwise or counter-clockwise, relative to the direction of motion. This is called left-handedness or righthandedness.  As the electron experiences space-time (meaning it must have mass), it evolves, constantly flipping the spins. Oddly, whether an electron is right-handed or left actually matters in the Universe due to the left-handed electrons having something called weak hyper-charge. This is why electrons feel mass. This mystery is part of an even bigger mystery called parity violation. The Higgs field doesn’t only carry the weak hyper-charge but manages to take on all possible values of this charge simultaneously. This means that the Higgs field is an infinite source or sink of the weak hyper-charge. The photon has spin, but this spin never flips unless it bumps into something else. All particles that feel mass interact with the Higgs field whether it is weakly (like the electron) or strongly (like the top quark). If mass is thought of as a force, which it universally is, it would not radiate from a point, like electromagnetism, mass does not come from a point source. A human’s mass would, in theory, be the same wherever they are in the Universe, suggesting that Higgs bosons are spread with an even density throughout the whole Universe.

I have compiled a list of the fundamental particles from heaviest to lightest:

All particles have an anti-matter version, where they have the same properties, but the opposite charge, for example a positron and an anti-photon.

In conclusion, the smallest particles in the Universe are the ones in the Standard model However, the smallest length known is called the Planck length which is 1.6 x 10-35 m and is equivalent to the width of strings which is heavily involved in the concept of string theory, where all particles are created through the string vibrating differently, but this has not been proven. Astrophysicists and physicists alike are still trying to unveil the secrets of the Universe and have a full understanding of this incredibly complex place.