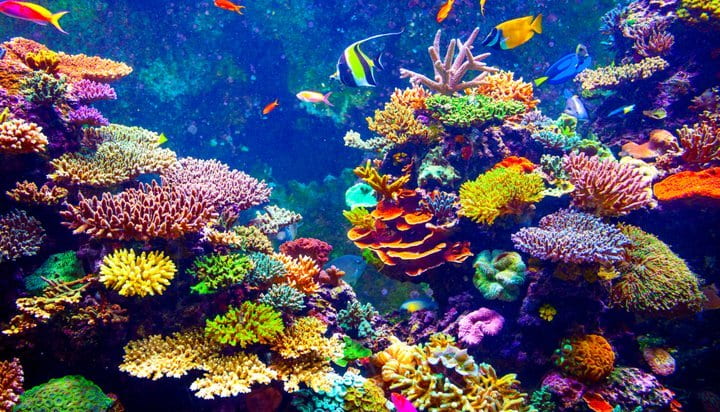 The Great Barrier Reef has almost died five times in the last 30,000 years as a result of environmental changes such as ice ages and changing sea levels and it is now suffering because of our actions which have caused higher sea temperatures as a result of global warming. There is a common misconception that corals are plants, however in reality they are marine invertebrates closely related to jellyfish and have a basic nervous system. They tend to live in compact colonies, forming the picture we envisage when we hear the word coral, and secrete calcium carbonate to produce a hard, protective exoskeleton. Micro-algae called Symbiodiniacieae live on the corals, causing the bright colours, and photosynthesise to provide food for them. In higher temperatures, corals will reject this algae and not accept it until the temperature returns to normal so that they can properly function again, which causes the all too familiar bleaching effect, starving the corals to death. Usually scientists prefer to leave the reefs to recover naturally, but now, unfortunately, the damage has become so devastating, with the Great Barrier Reef recently suffering its third mass bleaching in five years and record breaking sea temperatures, that they are being forced to take action to save the corals and conserve the reef ecosystems.

CSIRO, Australia’s national science agency, wanted to help the corals by increasing the algae’s heat resistance so that they could keep photosynthesising and providing food for the corals in higher sea temperatures through a process they have called “assisted evolution”. Scientists took samples of the Symbiodiniacieae species found on corals and bred them, with each new generation being exposed to slightly higher temperatures than the last, to gradually try to genetically evolve the algae to withstand heat up to 31°C, a temperature known to have dramatic bleaching effects. They did this over a period of four years and then took coral larvae and added normal, unmodified algae to some, and the evolved algae which they had been working with to others and heated them for one week at 31°C. The results were exactly as they hoped: the coral with normal algae bleached however the coral with algae which they had assisted to evolve by exposing to higher temperatures remained healthy. Their next steps are to test the algae on adult coral and different species to see if it will work on those too. This is by no means the end of their investigation or a definite solution to the problem, however it seems to provide hope that we might be able to save the reefs in the future.

Other solutions are also being investigated, such as using technology to modify corals. CRISPR is a genome editing tool which some scientists are using to investigate changing the DNA of corals and algae in an attempt to make them more heat resistant. However, this is difficult and, as Steve Palumbi, an American marine biologist, says “it is easier to find climate resistance corals than it is to make them”. It also introduces ethical questions about the creation of a ‘new, mutant species’ and there are a number of ways it could go wrong with lots of genes possibly needing to be edited. The prospect of introducing a new species to the Great Barrier Reef is worrying to scientists, particularly in Australia, after the results of introducing cane toads to the country in 1935 which were supposed to control pests but turned out to be a huge pest themselves, killing animals and sometimes even humans with their poison. In other studies, scientists are attempting to manipulate the microbiomes and evolve new bacteria which they might then be able to genetically modify to be better adapted to warmer conditions.

A definite solution has not been found yet but with many trials and investigations underway, hopefully we will be able to protect, conserve and rebuild coral reefs and their ecosystems all over the world in the future. The advances which have already been made seem promising but, as much as reversing the damage would be extremely beneficial, we also need to work on eradicating the cause which is killing so many organisms: global warming.