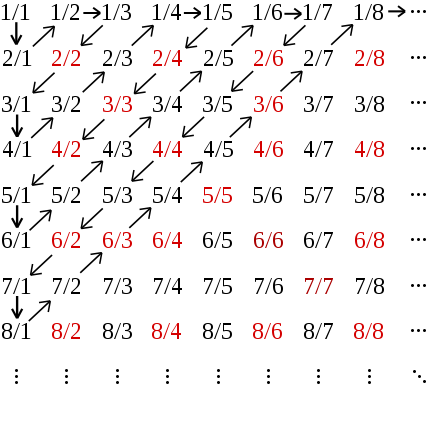 Georg Cantor was a German mathematician who was most famous for the creation of set theory. He was born 3rd March 1845 in Saint Petersburg where he lived until his family moved to Germany in 1856. He studied in Germany and attended the University of Berlin where he studied physics, mathematics and philosophy. He obtained his doctorate in 1867 and then went on to work at the University of Halle where he worked for the entirety of his career. Unfortunately, Cantor faced lots of opposition to his set theory from mathematicians such as Leopold Kronecker who called him a “scientific charlatan”, a “renegade” and a “corrupter of youth”. The criticism he received for his work is believed to have caused the depression that he experienced from 1884 to the end of his life.

Georg Cantor’s set theory continued on from Galileo’s Paradox. This was a theory that there are as many square numbers as there are natural numbers as they can be paired on a one-to-one correspondence. This felt counter-intuitive and Galileo concluded that the terms greater than, equal to and less than could only be applied to finite sets of numbers. However, Cantor went on to prove that some infinities are bigger than others with his set theory.

Cantor realised that he could pair up infinite sets like (1,2,3,4,5,6) and (10,20,30,40,50,60). This means that although the multiples of ten are a subset of the natural numbers they have the same number of elements because they can be paired on a one-to-one basis. He paired the natural numbers with different infinite series like even numbers, square numbers and fractions. These numbers are countably infinite as they can be listed in such a way that you could write down every single number in the set, although it would take forever.

When Cantor tried to pair up the decimals with natural numbers, he realised that they could not be paired up in the same way as it was impossible to list every single decimal. He proved this using his diagonal argument. He listed a series of different decimals and then took a diagonal line down them. He then created a new number by changing the first digit of the first number, the second digit of the second number, the third digit of the third number and so on. As at least one digit from each number was changed it meant that a completely new number was created proving that it is impossible to write down every single decimal. This is the second type of infinity and is called uncountable and is a set of numbers so big that it is impossible to list every single element.

This proved that the infinity of decimal numbers is greater than the infinity of natural numbers showing that some infinities are larger than others. Cantor called these transfinite numbers in order to distinguish these infinities between absolute infinity which he believed to equate to God. Cantor created a new notation for the size (cardinality) of the infinite sets. He used the Hebrew letter aleph (א). He defined the size of countably infinite sets like that of the natural numbers as aleph-null ( א₀) and the size of the uncountable infinity of decimals as aleph-one ( א₁). This opened up the possibility that there are sets with cardinality between aleph-null and aleph-one. This became known as the continuum hypothesis and although Cantor believed that there was no such intermediate set, he couldn’t prove it.