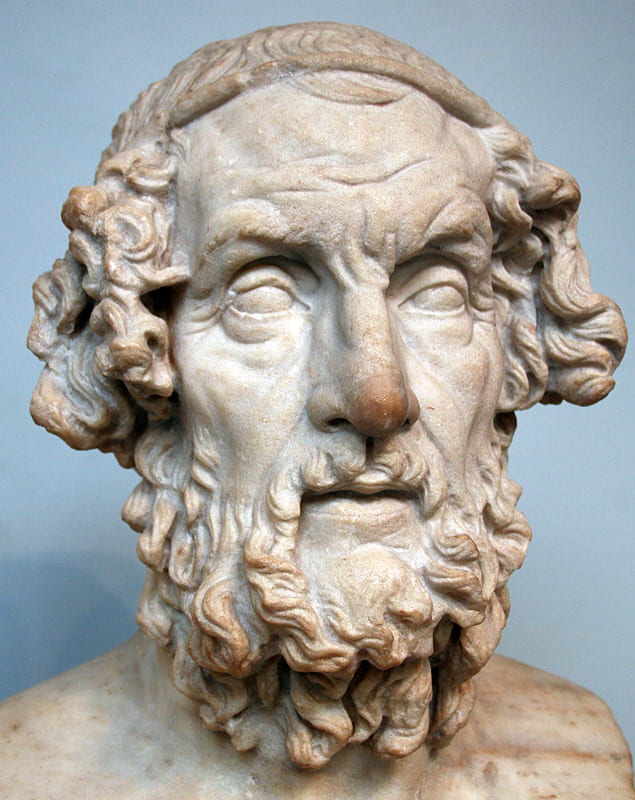 Homer or Virgil? Jordan or LeBron?

Imitatio, and the evolution of the simile.

The 19th April 2020 saw Jason Hehir’s docuseries “The Last Dance” released, a dramatic and retrospective retelling of the famous 1997-98 Chicago Bulls team’s season, whilst exploring stories of the individuals who made this team, none more famous than the great Michael Jordan. With the series receiving wide critical acclaim (9.4/10 from IMDb, and 97% from Rotten Tomatoes) it has rejuvenated debates over who deserves the title of best player of all time, with the two immediate individuals placed in contention being none other than the aforementioned “Air” Jordan, and the more recent Lebron “The King” James. Though hard to compare, this brought to mind another difficult comparison that, as a classicist, I am oft deliberating in my studies: that of Homer, and Virgil. Thus, please allow me for the remainder of this blog entry to draw strings between what may seem – at present – entirely separate and abstract spheres, and to bring them into closer orbit.  But first, for the sake of exposition, some brief literary history…

Homer is the name to which we accredit the two Epic Poems of “The Iliad”, and “The Odyssey”. 24 books each of dactylic hexameter, these are believed to have been composed circa 750 BCE; the former tells the story of a portion of the mighty Trojan War, between the tribes of Mycenaean Greece, and the Trojans, following the abduction of the famous “face that launched a 1000 ships”, Helen of Troy. The latter follows the story of one man’s journey home from this war, and the trials and tribulations that he faces along the way. There is indeed still a large debate over whether these were in fact composed by more than one person, or the books later sewn together at the Library of Alexandria, but one thing remains clear: they are masterpieces of literature. 680 or so years later, Publius Vergilius Maro – now known simply as Virgil – is born near Mantua, in the north of Italy. As the civil war ended in 31 BCE, he began his magnum opus, and the work for which he is best known: “The Aeneid”. This tells the aetiological story of Rome’s foundation, following the eponymous Aeneas’ escape from the burning, defeated Troy. By the time of its writing, Homer’s Epics were already established firmly with the renown in which we hold them today – even taught to memory to school boys throughout Rome – and the inspiration Virgil took from Homer is demonstrable in a deluge of manners. The manner that will be discussed in this entry, is the adaptation of the simile.

Description by way of comparison has been a longstanding tradition in literature. Though our present word for it comes from the Latin “similis” – meaning “similar, like” – it predates the Latin language as we now know it, and Homer was a frequent employer of the simile, to add vivid pigments and descriptions to his stories. As mentioned earlier, one of the obvious ways regarding Virgil’s inspiration from Homer is the way in which he regularly takes similes from “The Iliad” and “The Odyssey”, and edits them in order to serve his narrative purpose, as well as supplementing them with extra detail for gravitas and impact. The literary term for this is imitation – roughly, imitation – and although at first glance it may seem like copying, Virgil makes this an art form in itself throughout “The Aeneid” (as well as his earlier work “Georgics” but for now we shall only focus on the former).

The following is Homer’s simile, taken from Book 12 of “The Iliad”. It describes the “mighty” Polypoetes, and Leonteus, as they defend the Greek camp from the Trojan onslaught. The pair

“had planted themselves in front of the high gate, like lofty mountain oaks that resist the wind and rain for ever, supported by their long and sturdy roots.” (Il. 12.132)

Here Homer’s masterful comparison to the strength of the “loft mountain oaks”, resolute against the buffets of “wind and rain for ever”, successfully achieves the connotations of the tenacity possessed by the warriors, and the dehumanised comparison may even be a testament to the lack of vacillation exhibited as they stand steadfast against the mass of opposition in front of them, bravery implicit. If we now look at Virgil’s adaptation:

“just as the mighty north winds off the Alps vie with one another to uproot the mighty oak whose timber has hardened over the long years of life, blowing upon it from this side and that and howling through it; the trunk feels the shock and the foliage from its head covers the ground, but it holds onto the rocks with roots plunged as deep into the world below as its crown soars towards the winds of heaven – just so the hero Aeneas was buffeted by all this pleading on this side and on that, and felt the pain deep in his mighty heart but his mind remained unmoved and the tears rolled in vain” (Aen. 4.441)

It is unnecessary to go into a detailed scrutiny of the simile to note, quite obviously from its size, that Virgil has densely supplemented the original. In addition to the more extensive detail (e.g  “the wind” vs. “the mighty north winds (…) blowing upon it from this side and that and howling through it”) Virgil continues to nationalise his Epic, by relating the scenario directly to the Italian geography of the “Alps”. Contextually, this is found in Book 4, with the famous tragedy of Dido and Aeneas (adapted into the Purcell opera in 1680). The hero finds himself in enormous inner conflict, and although his heart longs to stay with Dido, Fate calls, and the gods force him to leave in order to fulfil such a fate. It is thus that Virgil deploys this comparison, which draws into light the prominent alteration: where Homer’s battle is physical, Virgil’s is internal, and where in the former’s case there are two distinct parties in opposition, here Virgil describes the conflict in one man’s mind. Homer utilises a basic image from the natural world, a quite observable, and visceral image, and Virgil uses it to give us insight into the unobservable, the intangible: the thoughts of our hero as “tears roll” down his face “in vain”. It is thus that in one swift move, Virgil not only links even the act of simile to the greater narrative and history of Rome, reminding us of Italy and the “Alps”, and improves on Homer’s original, but exhibits narrative flair as he makes the unseen visible.

Another example of this comes in Book 16 of “The Iliad”. Patroclus, donning the armour of the infamous – though currently brooding – Achilles, participates in a rampage against the Trojans, killing many of them, as the those who remain begin to flee, under the impression that the greatest warrior in mythical history has returned. Illustrating the sheer noise from the fleeing Trojans, Homer composes

“all the streams run in spate, torrents scar the terraced hillside, and rivers rush headlong down from the mountains with a great roar into the turbid sea, washing away the fields – such was the din that went up from the Trojan chariots as they fled.” (Il. 16.384)

The connection made between the visual, as the figurative river tears scars into “the terraced hillside”, and the audible, with the “great roar” that it produces – though making the sound the focal point of the simile – creates this lexical field of destruction and annihilation, cemented by the image of “fields” washed away, as the soldiers are swept from the battle-“field”. Virgil takes this and applies it to an altogether different scene; the simile finds itself amidst the fall of Troy, as Aeneas wakes to look upon the destruction of his city from the roof of his home. The son of Venus is depicted as

“like a shepherd when (…) a mountain river whirls along in spate, flattening all the fields, the growing crops and all the labour of oxen, carrying great trees headlong down in its floods while the shepherd stands stupefied on the top of the rock, listening to the sound without knowing what it is.” (Aen. 2.305)

Indeed, one can quite easily notice the derivative nature of the moment, although we cannot dismiss its brilliance so swiftly. Firstly, instead of this sound simply being observed by the omniscient narrator that is Homer, Virgil focalises the moment through Aeneas, placing him as the “stupefied” shepherd, utterly dumbfounded by the roaring battle’s sounds, capturing both the confusion of the hero, and also the pastoral, personal feeling that he feels towards the city that burns. The poet once more takes a concept, and puts it through a metamorphosis in order to suit a more human character; his heroism does not diminish, but the ease with which the reader (or indeed at the time listener) can empathise with him is increased.

This concept of extrapolating all that is good from the past, and synthesising it with new improvements, is prominent throughout the Augustan Rome from which “The Aeneid” is a product. From the Augustus of Prima Porta, the statue of Augustus that was very much inspired by Polykleitos’ Doryphoros, to the architecture that attempted to replicate the Golden Age, his reign was oriented – in much the same way that Napoleon drew on ideas from the past – on replication and slight alteration. And Virgil’s “Aeneid” is the perfect reflection of this, paying homage to his literary ancestry, with similes being one example among many where this is evident.

Now, an attempt to draw this to the debate around the question of who is the greatest basketball player ever? Lebron James, technically, if placed one-on-one with Jordan, may be more likely to win: their statistics are incredibly similar, but he just edges it in terms of athleticism ( 6′ 9″ versus 6′ 6″ could make a large difference, for example). And yet, the moves that Lebron does better? Jordan pretty much invented them… or at least turned them into an art form. As Virgil perhaps executes the simile in a more complex way than Homer, he took direct inspiration from his comparisons, even to the subject matter to which they’re compared; and as Lebron may do the post-up fadeaway better than Michael, Jordan ought to be recognised simply as the greatest of all time, for turning it into an recognisable, dangerous, and unstoppable move that now resides in the tool box of every great player.

Imitatio is more than imitation, it is homage and improvement in one.