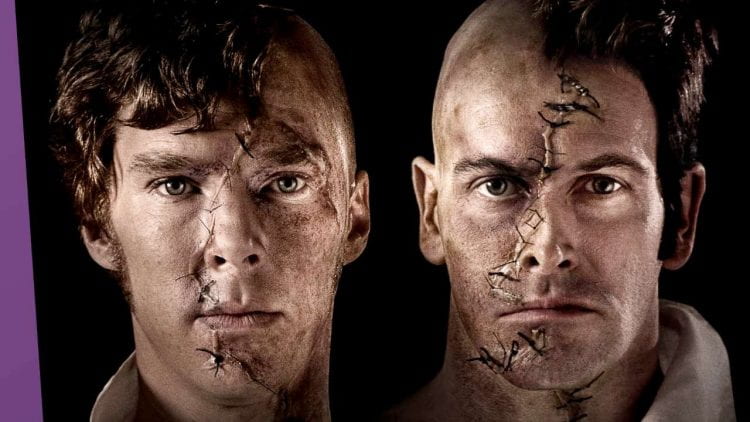 Theatre Review: ‘Frankenstein’ and its important messages to society

Due to the fact that theatres around the world have been closed and are facing devastating impacts from the Coronavirus, the National Theatre have been putting recorded performances of all sorts onto YouTube in the hope of bringing a positive force of entertainment to the community during these gloomy and unpredictable times. I have been watching lots of the performances that have been broadcasted onto YouTube, including ‘Twelfth Night’, ‘Treasure Island’ and ‘Jane Eyre’. The one that I have watched most recently was ‘Frankenstein’ and I was astonished by the level of talent that was portrayed in the two hour performance. 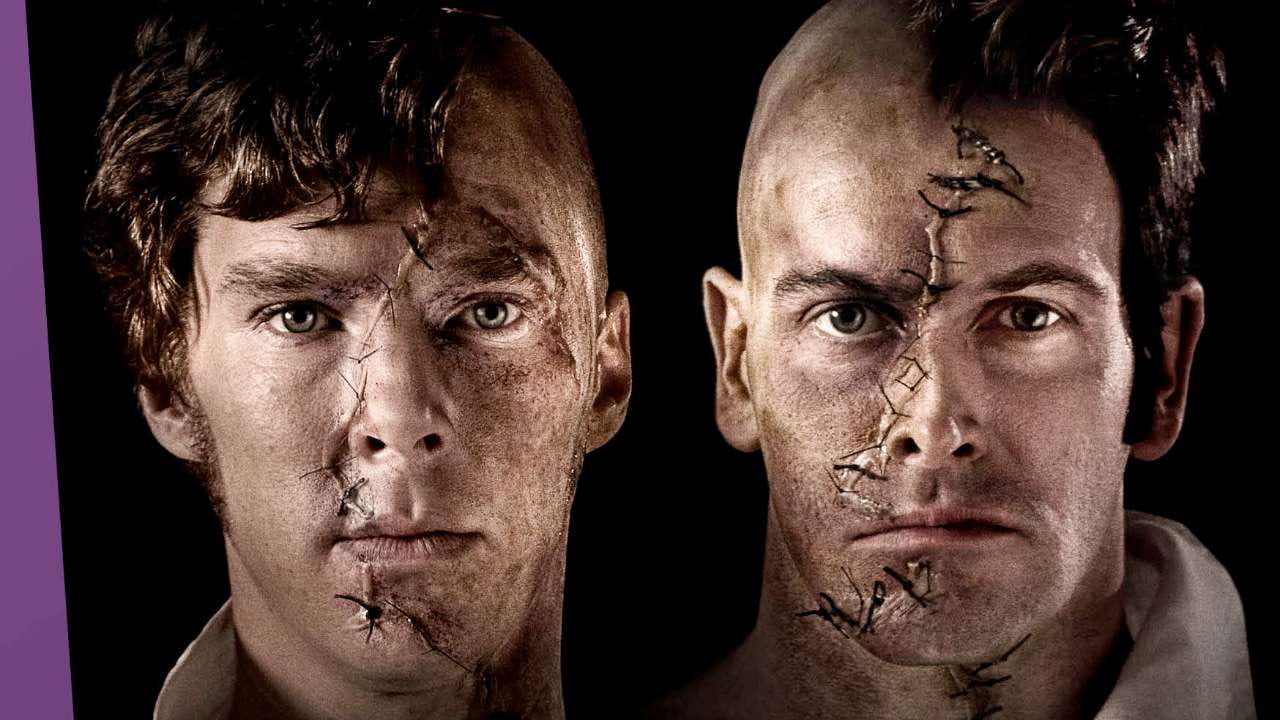 ‘Frankenstein’ was originally a novel written by Mary Shelly in 1818, and is a classic Gothic horror story. It was then adapted into a play by Nick Dear. This production was directed by Danny Boyle and was first performed at the Royal National Theatre on 5th February 2011. The two leading roles were played by Benedict Cumberbatch and Jonny Lee Miller. The interesting element to this casting is that both actors performed the role of Victor Frankenstein, the scientist, and then of the creature created from human corpses. The version that I watched was where Miller was playing the role of Victor Frankenstein and Cumberbatch was the unnamed Creature. The play contrasts the novel as it follows the story of the Creature rather than Frankenstein. As the play unfolds, we see the Creature receiving huge levels discrimination and violent attacks solely based on the way he looks until he comes across a blind man who accepts him as he cannot see this terrifying “monster”. However, as the Creature is beaten by the blind man’s son as soon as he laid eyes on him; there is a shift in his character where he seeks revenge and he continues to use this rage and hatred to harm ‘innocent’ people. This is shown through his horrific crimes where only society can truly be blamed as they have indeed created a “monster” or “beast”. 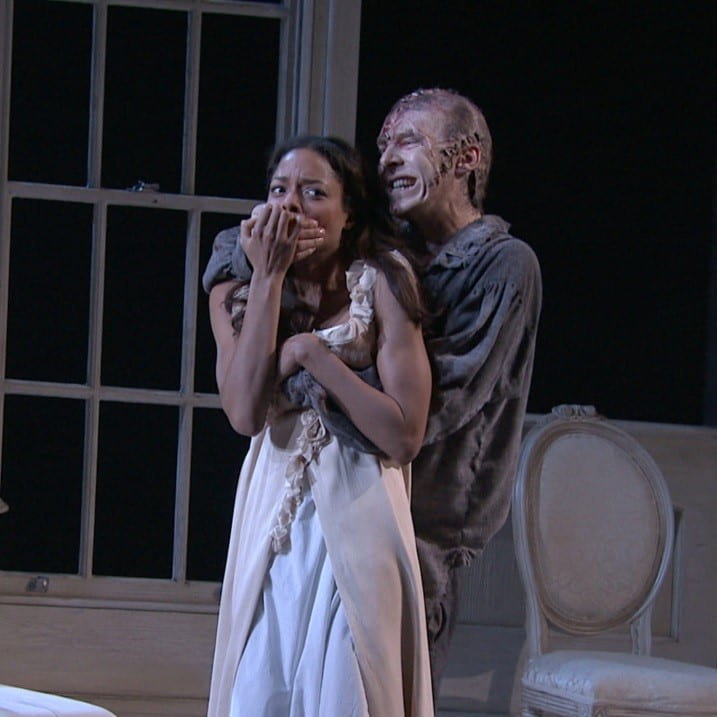 The play commences with the ringing of church bells from the middle of the audience, and the audience focus on the stage and see some kind of artificial, circular womb which has reddened veins covering the translucent material. It becomes evident that there is a body slowly moving inside this womb which creates a heightened intensity to the play as it is unpredictable as to what will happen next. Suddenly, there is flash of blinding light, from a canopy of hundreds of lightbulbs that cascades down over the womb which causes the body to jerk and shake vigorously as it is being shocked by the electricity. The sheer luminosity blinds the audience as well as the Creature which allows them understand how uncomfortable and unpleasant the experience is. The unnamed Creature writhes about on the dead stage for around ten minutes which allows the audience to fully connect and feel sorry for it. This extended length of time really creates a sense of longing to help this Creature as it tries to stand and walk as if it were an infant. The audience feel helpless as it continues to collapse to the ground while groaning with intense effort, until the Creature successfully stands. Cumberbatch successfully portrays the childlikeness of the Creature as he uses over-exaggerated facial expressions to reflect those of a young child by grinning with pride just as a child would, if they had just learnt to stand or walk. He uses a high pitch as he giggles and gurgles once he has successfully stood up and leaps about the stage with great joy and excitement. However, this happiness is short-lived because as soon as Frankenstein (Miller) returns he lets out a horrified scream and abandons the Creature in disgust and horror.

This performance really enhances the feelings of sympathy towards the Creature and highlights the detrimental effects that society has on individuals who are different. Following his abandonment, the Creature is left alone to die and his first proper interaction with humans is when a train roars forward. This is a very effective part of the play, as I feel that it emphasises the dangers of technology (technology also brought the Creature to life) because the train seems so threatening and would scare the Creature as much as the audience. The noises that emerge from it are screeching, loud, ominous and deep which contrast with each other, and the dark music played in the background, to create an uncomfortable atmosphere as the train begins to move in slow motion. This allows the audience to fully witness the authoritative and dangerous machine and again lets them sympathise with the Creature as it appears to be extremely threatening and malicious. Sparks then burst out of the sides of the train which exaggerate the sense of threat and danger. The people on the train all wear goggles and protective gear which makes them look like they come from another planet, which would also frighten the Creature. Here, the Creature is beaten over and over again as well as being shouted and screamed at. At this point, the audience feel very helpless and are desperate for someone to show the poor Creature some acceptance and love.

The way in which the Creature learns to speak, read and be educated is through the coincidental meeting of an old, blind man, De Lacey, played by Karl Johnson. Due to the fact that De Lacey cannot see, he accepts the Creature, nurtures it and teaches it the work of Milton as well as discussing the notion of original sin. The Creature learns how to be polite and good as Cumberbatch copies De Lacey’s gestures which create an element of comedy. De Lacey explains that that everyone is born pure and that ‘evil is the product of social forces’ which is a key theme of the play as we discover that it is the hate and prejudice that the Creature receives that inevitably makes him evil and bad. Therefore, when he is beaten by Felix, despite being promised by De Lacey that his son will accept him, the Creature seeks revenge and burns down their home. While the Creature is being beaten, De Lacey cries out: ‘no man is a monster’ which is a very significant message that encourages acceptance in society for those who are different.

The Creature then uses Frankenstein’s journal to travel to Geneva and track down his creator as we realise that he feels lost and alone as he has no family or friends. Once he manages to talk to Frankenstein he makes him swear to give him a female counterpart and Cumberbatch effectively portrays the intense desire for this as he screams: ‘I will not wait until I desolate your heart’. With reluctance, Frankenstein accepts and the Creature leaves shouting: ‘I will be watching’ which echoes and fills the stage. This is very effective as it haunts Frankenstein and the audience greatly.

Frankenstein moves to Scotland where he creates the bride for the Creature. Cumberbatch is very successful in conveying his delight with Frankenstein’s female creation as he cries out with a great sense of hope: ‘all the memory of hell will melt like snow’. He uses a higher pitch and leaps about the stage in happiness. However, this feeling is short-lived once again as we hear the sound of a woman screaming and the slashing of a knife against skin. This is when we realise that Frankenstein was lying all along as he has destroyed the Creature’s bride.

This leads to the Creature seeking further revenge as Frankenstein broke their promise. The Creature uses his new acquired skill of being able to lie in order to ruin Frankenstein’s life as he rapes and kills his bride, Elizabeth, played by Naomie Harris. The audience see a shadow of regret in the Creature’s voice as he says: ‘My heart is black. It stinks. My mind, once filled with dreams of beauty, is a furnace of revenge’ and we also see his realisation that De Lacey’s words were ones of truth and wisdom. Cumberbatch spits out these words almost through gritted teeth as he despises what he has become. However, the Creature knows what love is and what is feels like because in an earlier scene he describes the sensation with great and passionate imagery which emphasises the fact the Frankenstein doesn’t know what love is or the feeling of it at all. This is ironic as he is a very privileged individual who had a bride and a family whereas the Creature has been shown nothing but hate and cruelty.

The final scene is very moving, tragic and sorrowful. Frankenstein and his creation travel to the Arctic Circle where Frankenstein can destroy his creation. However, he collapses to the ground, frostbitten and exhausted. The Creature believes that he has died and begs for forgiveness and cries out: ‘All I wanted was your love. I would have loved you with all my heart’ and places many kisses on Frankenstein’s forehead. The Creature shows this deep affection with his “master” because he is the closest thing he has to a family and so the audience, again, have pity and there is a sense of hope that Frankenstein will survive and finally accept his creation. However, once Frankenstein wakes up, he brutally rejects his creation again and through his rage and hatred for Frankenstein and society itself, the Creature shouts: ‘Come, destroy your creation!’ and the two men walk off in slow motion into the fog, where the Creature will finally and tragically meet his end.

This production was exemplary and very inspiring considering the two actors performed both of the main roles. It reflected very important messages; the importance of love, acceptance and of friends. We also realise how detrimental society can be towards those who are different and lead them to become outcasts. However, I do believe that this is changing dramatically because more and more people are finally being accepted for who they are as individuals and face much less discrimination than they would have done in the early 1800s when this novel was published.