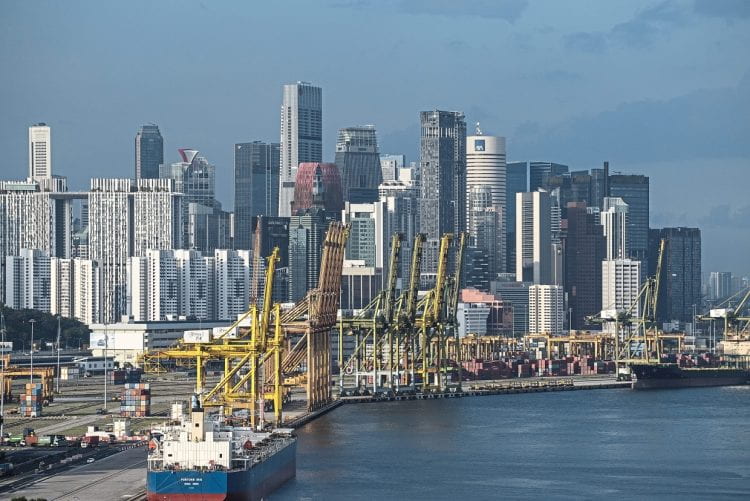 Once a country with high unemployment, low sanitation and almost no natural resources, Singapore now boasts a higher GDP per capita than the USA. Singapore’s development can be seen as extraordinary as a country with almost no aid managed to create themselves one of the most stable economies in the world with no foreign debt, high global revenue and a constant positive surplus.

Singapore was ruled under the British colony for over 100 years from 1819 onwards. However, during World War 2 the British lost Singapore to Japan which meant that Singapore was ruled by Japan from 1942-1945. Once the war ended Singapore reverted back to British control nevertheless, the trust was gone between them. On August 31st 1963 Singapore broke away from the British to merge with Malaysia. Yet, due to ideological differences the resulted in social unrest and disputes between Singapore’s and Malaysia’s ruling, Singapore left Malaysia and became independent on the 9th of August 1965. Nevertheless, Singapore’s independence was not the best thing for them as they had many problems such as: more than 3 million people were unemployed, squatters, very poor sanitation and very little natural resources. Singapore tried to find some form of international help however, no-one offered assistance meaning Singapore had to fend for itself. However, Singapore gaining independence is what caused them to turn into the affluent nation they are today as it led to the first Prime Minister of Singapore, Lee Kuan Yew. 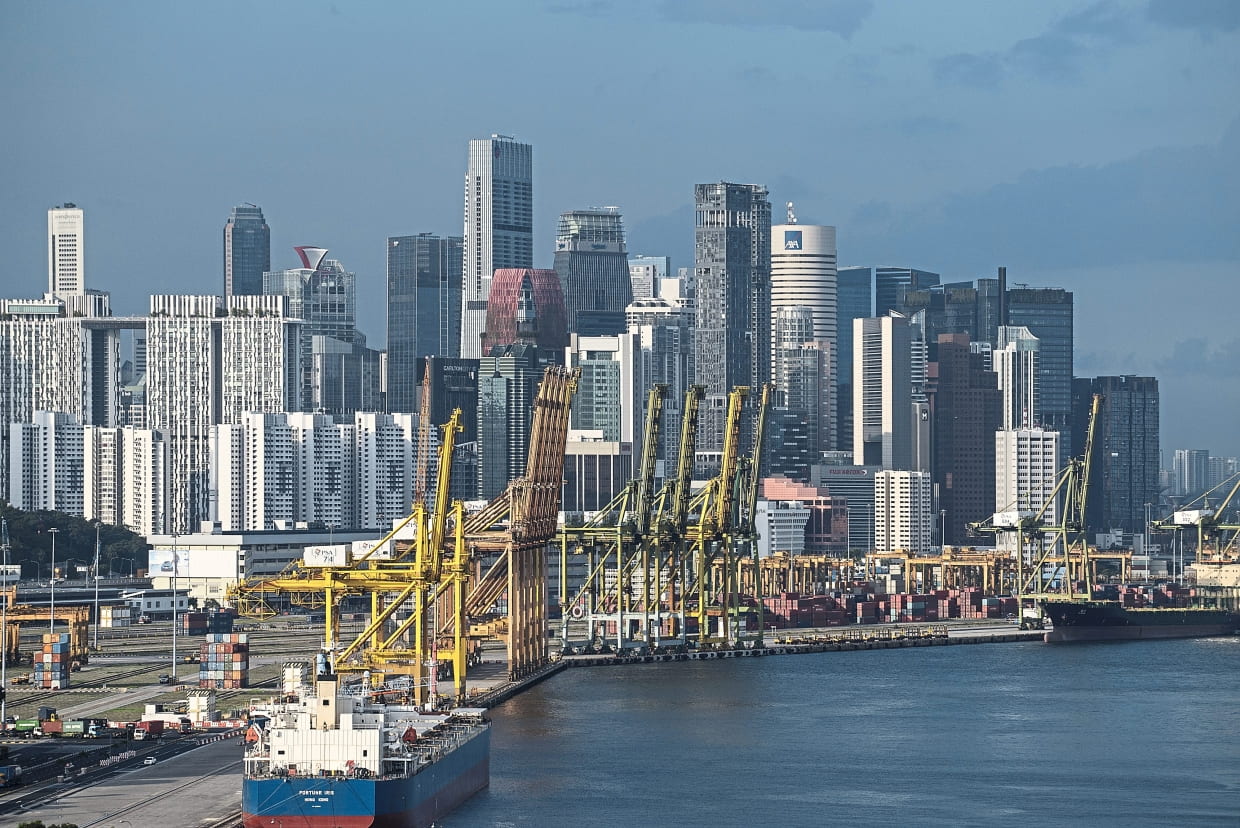 Gantry cranes stand at the Port of Singapore in Singapore, on Friday, July 12, 2019. An unexpected contraction in Singapore’s economy and a slump in China’s exports sent a warning shot to the world economy as simmering trade tensions wilt business confidence and activity. Photographer: Ore Huiying/Bloomberg

Lee Kuan Yew knew that the way for Singapore to prosper as a country would be to attract larger, more developed countries and to try and get them to set up multinational companies in Singapore. This is because having them set up their companies in Singapore would increase the circular flow of income as these businesses would provide jobs and wages, dealing with the unemployment problem. Moreover, it means that these larger countries would not want Singapore to become bankrupt as they have many of their own companies invested in it. Today, there are more than 7000 TNC’s in Singapore which is proof that Lee Kuan Yew was successful in his goals. However, how was this achieved? Lee Kuan Yew used Globalisation. Globalisation is the connection of different parts of the world resulting in the expansion of international cultural, economic and political activities. It causes a spread of products, technology, information and jobs across national borders. He wanted to entice many of the advanced countries to bring them to Singapore. But, to do this he had to create an attractive environment by providing things like: low taxes, safety, no corruption and few restrictions.

To economically create an attractive environment Singapore provided the advanced countries with: low corporate taxes, few capital restrictions and liberal immigration policies. These factors were massive in attracting multinational companies to Singapore as the low corporate taxes meant a much larger profit incentive for many of them. This is because with low corporate taxes, their cost of production will do down and as a result they will generate more profit. To add, they will have a large pool of unemployed workers due to the immigration laws and as a result, these companies will find it much easier to find labour. Likewise, they had few capital restrictions meaning that these multi-national companies can move large amounts of money out of Singapore. This was very desirable as they were able to take the money they generate back to their headquarters. Lastly, they had few regulations which meant they are able to further lower cost of production. This is because, the government would not have set a minimum wage or make the companies fulfil certain safety requirements. Due to this, the companies could cut spending on these aspects to produce cheaper goods. Although, many have argued this could have led to the exploitation of many workers in Singapore, more than 3 million people were unemployed. Therefore, many people did not have a stable income and as a result being provided with a job with a stable income, no matter the wage or working conditions, would help bring people out of poverty.

In order to present themselves as politically attractive they adopted a totalitarian state which is where there can be no opposition to the governments rules and claims from any parties or individuals. It creates a high level of control on the public and their private lives. Nevertheless, this was also a key factor for globalisation. This is because the tight control they have creates a stable government which TNC’s find attractive. Moreover, it leads to government continuity as the government will be in power forever, meaning they can organize projects that will take years to complete without worrying about other parties and if they will take over and scrap the project. In addition, Lee Kuan Yew made their main objective their economic development and growth. Due to the fact no one was able to challenge this, Singapore’s efforts quickly went into this and as a result led to unemployment falling, higher wage incomes and the arrival of technological firms. Furthermore, Singapore was able to direct their resources into their economic growth quickly and efficiently as they had no-one challenging them and no-one to consult. Although, many people believe that the totalitarian state prevents many people’s political rights, Singapore had a Benign dictatorship which means they valued stability over human rights. Nevertheless, this was also very successful as Lee Kuan Yew did not abuse his power. In addition, from 1937 Singapore had an anti-corruption law called the Prevention of Corruption Ordinance. However, this was deemed as unsuccessful as there were still cases of corruption coming from Singapore and it was a large problem for them. Consequently, in 1960 the then Minster of Home Affairs Ong Pang Boon introduced another legislation to monitor corruption called the Prevention of Corruption Act. This legislation was crucial in helping to reduce corruption in Singapore as the harsh penalties were a massive deterrent.  Furthermore, on October 1952 the CPIB was founded in Singapore. This is the Corruption Practises Investigation Bureau, a government agency that investigated and prosecuted corruption in Singapore. These two factors were effective in removing corruption across Singapore and we can see its success as Singapore is now seen as the 4th least corrupt country in the world. The lack of corruption in Singapore made it very appealing for companies. Many countries and companies would want to avoid a place suffering from corruption as it can often lead to a misallocation of resources and can increase the risk of financial loss if the corruption can affect the business.

Furthermore, Singapore’s location was also crucial in helping them attract countries as they were suspended in the Strait of Malacca. It can be seen as one of the most important shipping waterways in the world. It is the shortest channel between the Pacific Ocean and the Indian Ocean linking major economies such as the Middle East, China, Japan and South Korea. It is what caused Singapore to have one of the busiest ports int the world. Lee Kuan Yew even stated that without the Strait of Malacca Singapore would not be half as big as it is now. The strait guaranteed them control of 40% of trading passes. This allowed them to provide free trade, low tariffs and few non-tariff barriers which made it much more appealing for businesses as, the low-tariffs and low taxes will allow businesses to cut cost of production or shipping. Therefore, they will get the same revenue by spending less which consequently, increases profit.

Once Singapore attracted the companies, they were crucial in helping them develop. Globalisation does not only cause a circulation of goods and businesses but, a circulation of knowledge and information. Now that countries had their companies in Singapore, they wanted Singapore to prosper. This is because they did not see Singapore as a threat but, as an opportunity as it allowed their businesses to make more money which can mean more of their profit going back to them. As a result, Singapore received lots more investment from foreign countries. To add, Singapore also received taxes for these businesses along with income tax for all the citizens who have been provided with jobs. Although, they would not have been provided with the main jobs at the TNC’S, they were provided with manual labour jobs by the companies such as janitors and cleaners. To add, many people working for the TNC’s came and lived in Singapore. This led to more locals becoming maids and cleaners for them. This meant that money that the workers got did not just go straight out of Singapore but, was also paid towards locals for their labour. As a result, it increased the circular flow of income of the Singapore economy. With this investment they improved their infrastructure and human resources causing a decrease in the number of slums they had and squatters. Moreover, they set up technical schools and paid workers to train their skills in tech. Finally, Singapore was also turning into a large tourism spot so the people who could not get the industrial job worked labour-intensive jobs. These improvements largely increased the economic development of Singapore. This is because it causes an increase in higher skilled workers meaning a more productive labour force which can cause an increase in their GDP. To add, with the technical school it means that more higher paying jobs will be taken up as people now have the skills to do so. As a result, there will be a large increase in the amount of income tax the government receives which can help increase their government spending. Not only this but, the more people working will increase consumption meaning the government get more VAT tax too. Finally, since many of the people on these schemes are locals it means that their money won’t be sent back to any foreign countries and will stay in Singapore increasing the circular flow of income in Singapore.

In conclusion, by creating an attractive economy through economic and political changes to Singapore, Lee Kuan Yew revolutionized Singapore creating arguably the strongest economic hub in the world. By attracting more developed countries and multi-national companies Singapore, gained a large influx of money causing rapid development. This caused rapid economic growth in Singapore and using the Malacca strait they built the largest and most important port, in the world.