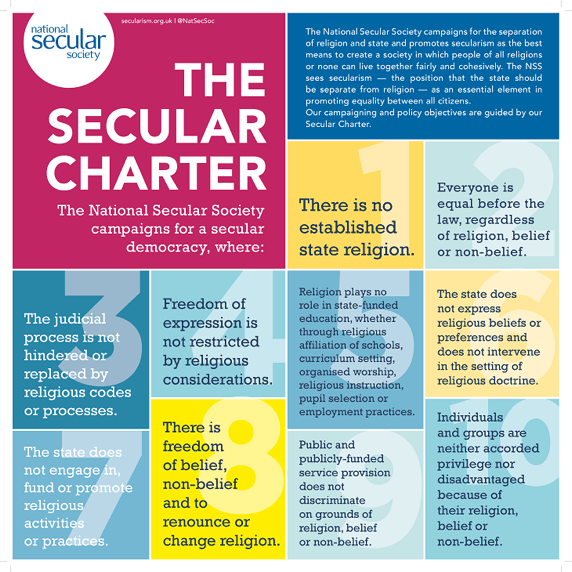 Firstly what is secularism? A simple definition of secularism is the separation of state from religion. Meaning the government isn’t religious, remains neutral and doesn’t implement any particular religious practices within institutions or on its people. There is an organisation which promote this ideology called the national secular society. They state on their website secularism.org.uk « Secularism is the best chance we have to create a society in which people of all religions or none can live together fairly and peacefully. » and I agree.

This is their charter:

What drew me to the concept of a secular nation is the equality, freedom and unity I believe that it can promote. The issue comes however with how secularism is implemented into a country and there are arguments questioning how successful a secular government can be in improving societies. I have a real example of a secular country and I’m going to go into a bit of detail about how they practise secularism and what problems their society’s faces as a result and most importantly what we can learn from it. This being…

France. Studying Laïcité as my project for my IRP for my french A-level was actually how I came across secularism. So what is Laïcité? A law passed in 1905 which established the separation of church and state which meant the previously catholic country was then made ‘neutral’ and religion became completely separated from public institutions and laws.

These are the principles of laïcité : 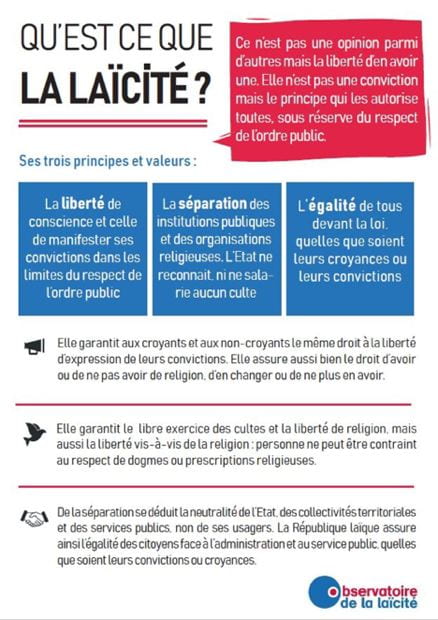 Although true that Laïcité can be translated simply to secularism it is a bit more than that. It is firstly about backing the french motto, liberté, égalité, fraternité , as well as attempting to create an environment in which inhabitants are recognised as french and are not defined by their religion or race. It sounds a little nationalist when I put it like that however I do believe the secularistic body of Laïcité is in good heart which is to promote equality and recognise everyone as having abilities and qualities to define them as opposed to their origin and faith.

Despite this positive mantra, the laws with respect to laïcité in the last decades have been a little controversial and have lead to heated political debates and social upheaval. These being the ban of religious symbols in schools in 2004 and the full-face veil ban in public spaces in 2011. Do you see why this created an uproar? These laws can be viewed as targeting Muslims. The argument is that banning obvious religious symbols doesn’t affect Christians or Jews and the like,  they can still wear small necklaces with a cross or star pendant for example, yet a Muslim must remove their veil. This to many, including myself, doesn’t seem fair, does it? On the one hand, one could argue the thought process behind it, if you were to look at it from a more  feminist point of view I suppose, as there is the argument that men are not forced to wear a veil or burka within the religion and therefore it oppresses women so by banning the veil it promotes gender equality. Maybe?

Perhaps this is the feeling for some Muslim women however what we need to recognise is this law does take away their freedom and right to make their own decision in the matter and doesn’t restrict other religious groups as much which therefore contradicts the idea of freedom and equality that Laïcité is claiming to encourage.

The banning of religious symbols in school is interesting.

Although like laïcités I do believe that children should grow up to make their own decisions about their beliefs and grow up in an environment where they are free to explore and make these choices however I must argue that this law banning religious symbols; no burkas, no crosses, no stars etc., In state schools means this liberty is not obtained and is it rather more suppressing. Again many Muslims feel targeted and although the goal is to make a more integrated community this has led to Muslims feeling they can’t be involved in state institutions and moving to public Muslim schools because they don’t have the freedom to express their belief in France’s state schools.

In my opinion what we need to learn from this is that a proper secular society should allow the wear of religious symbols if it is truly the choice of an individual and hasn’t been forced upon them as well as also provided that they, themselves, are not preaching their believes on others in doing so. I can admit that yes perhaps it’s difficult to judge if a child especially truly wears a Religious symbol on their own accord or if it is forced by their parents or the like. However, schools should be a positive space for a child to have the freedom to explore this decision and not be immediately prohibited from doing so as, what have these french laws resulted in? Some could argue a perhaps more segregated society which is not beneficial for a modern community and not only Muslims feel targeted. There also arguably appears to be a lot of antisemitism in France still despite it being decades since the Vichy regime which was a major landmark in France’s antisemitic history. In recent year’s many Jews have decided to move to Jerusalem or elsewhere since they no longer feel safe in France due to increased terrorist attacks on the Jewish community and general hate crimes which arguably could be caused by social unrest due to cultural divides in communities.

All this really doesn’t sound like the idealistic peaceful secular image does it?

I’m not saying I think Laïcité is a bad thing because I agree with the principles however it’s the way the country has put it into practice that I don’t think truly promotes the values and benefits to society that a secular country should.  I think that we need to learn from and recognise is that the french Laïcité focuses too much on creating a neutral environment that it appears to be ignoring the existence of differences rather than celebrating them which leads to segregation, discrimination and perhaps is failing at promoting peace within communities.

The reason I’ve gone into so much detail about France is not just because I already have knowledge from my research for my IRP but because it shows examples of how secularism can have a negative effect on society and the problems a nation could face when transitioning to being secular. But what I took from this is not that secularism is of disadvantage to communities but that in my opinion France has drifted away from its main principles and has not enhanced the full power of secularism which I believe can be of great advantage for the world and we can learn a lot from the social issues that France faces regarding Laïcité.

I know that the world will never be in a position where everyone’s thoughts and views are congruent so rather I like to imagine the future ideal society as a place of respect and acceptance where each individual with their own mind and their own views can live peacefully amongst one another . Everyone in the world will never agree on one faith, one way of life, the same wants, the same needs or anything really. A world of differences is what makes it interesting but the conflict and wars which arise from disagreements definitely are not. An ideal society to me would be a place that cultivates understanding, respect, freedom, equality and where each individual feels secure and happy within themselves and their community so that hate cannot flourish.

So how does secularism come into this ‘ideal society’ of mine? Secularism is a framework and a starting point in which equality and unity within society can be achieved. There’s no particular religious influence which means there’s no pressure to believe or not to believe and no particular group of people are advantaged or disadvantaged as a result of their beliefs. It would mean laws are passed regarding the collective well being of the people and are not influenced by particular religions. Everyone would share public services like hospitals and police services in which no one is denied access. School’s themselves would not be religious and would be a place where every student feels welcome and are taught to respect, discuss and be compassionate of each other’s differences. I believe secularism can help integrate communities which is fundamental as we develop as there’s so much more we can learn and understand about the world  by observing and discussing with one another.

So to conclude, for me, secularism has the potential to be a propeller towards a society where everyone agrees to disagree in peace, therefore, creating more integrated happier communities.