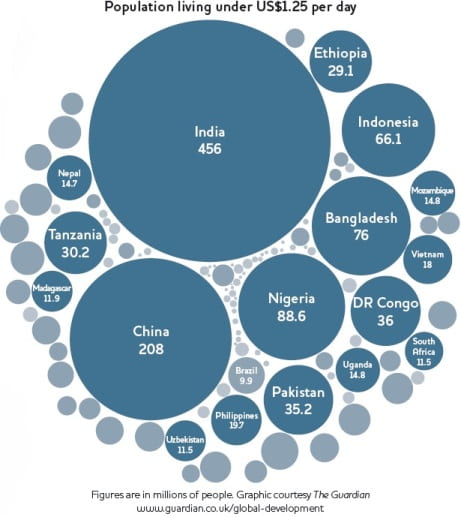 The Bottom Billion- how they got to where they are and what can be done to fix it.

When watching the news, a concurrent collective of countries appear on the front page as areas of global concern. This is often due to the beginning of a new civil war, the beginning of a famine or the collapse of a government. Over the past fifty years, the number of countries classified as least-developed countries (LDC’s) has dropped from 53 to 47. Having said that, over this period, 1 billion people have become persistently stuck, facing the same problems that many of the developed counties did hundreds of years ago. The question is, why are these countries stuck in a persistent loop of poverty and what can be done to help them break free?

Some of the reasons why these countries are trapped in the bottom billion are due to conflict, natural resources and being landlocked, exacerbating the effects of bad neighbours. The bottom billion is defined as the approximate 1 billion people living in the poorest countries.

Currently, 73% of people living in the bottom billion have experienced a civil war or are still in one. The main reason why this occurs is due to civil unrest created by stagnation or even decline of GDP. Whether this stagnation is due to poor governance or just the natural cycles of the economy, people want someone to blame. When this is coupled with the fact that the government is also likely to be fragile if the economy is, this creates a breeding ground for rebellion, with rebel leader Laurent Kabila, a Congolese revolutionary and later president, stating that: “all you needed was $10,000 and a satellite phone.” However, as shown by the American civil war in the 19th century, one rebellion doesn’t point to a lifetime of poverty. Poverty is caused by the repeated cycle of war as the new leader pumps large amounts of money into the military further decreasing growth due to a rise in inflation. This leads to an average GDP decrease of 2.3% each year as less money goes towards the people. This action also acts as a double-edged sword as it increases the power of the military therefore, making a military coop even more likely. Although rebellion can thrust the country into an age of vast social justice and social improvement, the true intentions of their leaders whether they be selfish of selfless can never be truly identified until they come into power.

Another pitfall that these countries must avoid is that created by natural resources which has been coined as ‘Dutch Disease.’ This occurs when there is rapid development in a specific natural resource sector, causing the value of the currency to rise as the exports of that product increase and therefore, the demand does as well. Because of this, other goods that the country offer become progressively more expensive in export markets decreasing the purchasing power of overseas consumers. This negatively affects other sectors. In these poorer countries this problem is huge as many countries (especially those in central Africa) are not able to diversify their exports leading to the affluent 1% being benefitted and the country as a whole losing out as fewer goods are sold. Access to large amounts of natural resources can also hurt the country’s hopes of escaping poverty as money-hungry militaries and rebels try to take over in the hope of hundreds of millions in return by selling the rights to the resources to powerful businesses in return for quick cash. This is proven by the fact that oil companies make the most profit in poorer countries, even though the infrastructure for transportation and equipment is worse, pointing to the opposite.

Finally, another thing that throws countries into poverty is due to something they cannot control, geography. For states such as Burundi with a growth rate of 0.1% as of 2018, the additional 0.5% to GDP growth rate predicted to be caused by access to the sea can make a massive difference to the country’s economy. However, as proven by Switzerland who has thrived in Europe, what causes these countries to struggle is poorly governed and financially poor neighbours, not just being landlocked. Due to Switzerland’s location, its surrounded by rich countries which act as its market. However, for countries such as the Central African Republic, surrounded by Chad and South Sudan, these countries are unlikely to provide the market to grow since the whole of Sub-Saharan Africa only has an economy the size of Belgium. Furthermore, this also means that these countries cannot access markets outside of the continent due to the poor infrastructure of their neighbours for transporting their goods.

These factors and how common they are shows how bleak the future for these countries maybe, with the estimated time for a turn around for a failing state being 59 years. Although this fact may be inescapable if they are on their own, what can we and the countries that we reside in do to reduce that number and increase the rate of a turnaround?

One way in which we can help these countries is through aid. However, as shown by the fact that 99% of the money given to Chad for health clinics did not reach its intended target, we must change the way we think about aid and how we give it. One simple and effective way we can do this is to give aid in regular intervals rather than all in one go, inadvertently controlling how the bottom billion spend their money helping to reduce capital flight and large spending on the military as its easier to track where it goes. Furthermore, another more effective way of giving aid is in the form of goods, as demonstrated in Iraq by the Oil-for-Food Programme. This increases the quality of life for citizens and their wellbeing, allowing them to work and sell excess crops at market, helping to break the cycle of decline. Although this points to aid in the form of goods and money being the solution, over the past 50 years of developmental aid, absolute poverty still exists. The more monetary aid that is given negates its effects to the point that the addition of more money makes no change. Although it may look good for politicians to donate tractors and agricultural equipment as done by Canada to Tanzania, it is of no use if they don’t know how to use it or cannot afford the fuel. Furthermore, if countries become too involved in another’s affairs, it may come across as controlling, appearing to have a more sinister motive, damaging their reputation in that given country.

One way in which aid can be given effectively is via the use of essential workers. These workers, such as the Chinese who manned the Ethiopia-Djibouti railway, teach the locals essential skills to work their machinery or help in the government to improve efficiency and decrease the amount of money wasted. This aid can be extremely effective, giving workers skills to those on par with the western world. However, there are also problems created by this intervention as it has struggled to take off due to pride and public perception in these countries. The fact that we give poorer countries access to our resources and workers implies that theirs are inferior, causing many to reject this help. The only way that this can be solved is within the country, changing the perception of foreigners locally which had formed in colonial times to that of people who genuinely want to help. Also, if the foreign workers remain in their positions for too long, they are no longer helping but are rather stopping local workers from obtaining such jobs. To maintain a strong connection to the local workers and avoid a negative perception, we must prevent this. Although helping to establish large corporations into these countries may seem like we are forcing capitalism down their throats, there’s a good reason. Apart from the obvious positive effects of more jobs, it creates an agglomeration of businesses, improving the infrastructure and supporting local businesses. This draws in more and more companies creating a massive boost for the country helping to draw it out of poverty in a similar way to that of China. This diversification of the market and the addition of competition also helps to avoid the problem were businesses monopolize market price, inflating it due to the lack of other options for locals to buy from.

Finally, we can also help these countries by changing our laws to benefit them. Due to the current tariff’s in place, the cost of exporting processed materials is higher than that of unprocessed, therefore, the bottom billion are finding it extremely hard to diversify their markets. This creates an arduous situation where we are inadvertently negatively affecting the growth of these countries. However, this can be easily fixed as proven by the African Growth and Opportunity Act (AGOA) which has increased African garment exports by 50% by providing trade preferences and duty-free entry into countries such as the USA. With legislation such as the AGOA Acceleration Act of 2004 in place, we can offer our market to these countries at a cheaper price, bringing in more profit and therefore helping them escape from poverty.

In conclusion, the only way that the bottom billion can escape poverty is by becoming self-sufficient yet that doesn’t mean that we cannot help guide them to that stage and decrease the time it takes them. To do this we have to first focus on communication, building strong relationships and setting out guidelines for what our role is in their country. This brings the local people on board with what we are doing to maximise the efficiency of cooperation and the speed at which changes take place. We must change how we give out aid and help these countries to grow their economy, giving them the skills and tools needed to do so, with the most successful support coming when working in tandem with local people and local firms, rather than going through potentially corrupt governments. This will hopefully ensure a sustainable path to prosperity, bringing change which we have so far failed to do so.