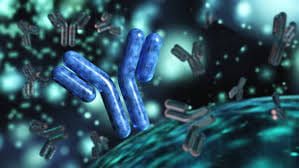 Antibodies have been used to treat disease and infection for over a century, but in the last 50 years scientists have gradually been able to develop more and more sophisticated uses for them. One of such uses is monoclonal antibodies, the development of which was started in 1975 by two scientists called Kohler and Milstein. Previously, researchers could not figure out a way to produce large amounts of antibodies outside of the immune system and in the laboratory. While Kohler and Milstein’s breakthrough was immediately hailed as the solution to this dilemma, the development of monoclonal antibodies has proved to be a convoluted one. Scientists thought they could be immediately used to target specific cells in the body without affecting surrounding tissues, leading to the term “magic bullet”. However, since their initial conception new problems in the utilization of monoclonal antibodies have consistently forced scientists to go back to the drawing board. I will consider some of these problems, as well as some current uses for monoclonal antibodies and what possible prospects they hold for the future.

So what are monoclonal antibodies and how are they produced? In the immune system, lymphocytes (a type of white blood cell) produce specific antibodies to attach to complementarily-shaped antigens on the surface of pathogens. This means that the capabilities of bacteria, viruses, and other harmful microorganisms to cause disease are reduced, for example by labelling them so that phagocytes (another white blood cell) can recognise and engulf them, or by preventing those pathogens from producing toxins. Monoclonal antibodies are a more sophisticated form of the ones produced in the immune system. They are produced from hybridoma cells, which consist of tumour cells fused with single clonal B lymphocyte cells- lymphocytes which produce one specific desired antibody. It was Kohler and Milstein’s great discovery that the use of myelomas (a type of tumour/cancer cell) would mean that the mortality of the hybridoma cells could be extended indefinitely. They had therefore solved the problem that had been plaguing scientists working in the area- how could they stop monoclonal antibody-producing cells dying so quickly?

Monoclonal antibodies could now be produced in laboratories and utilized for new treatments and application. The way scientists do this starts with, usually, a mouse being injected with inactive pathogens of the disease scientists want to treat. This stimulates its immune system to produce lymphocytes which secrete antibodies specific to the pathogens of the disease. These lymphocytes are then extracted from the mouse and combined with myeloma cells to create hybridomas, which produce monoclonal antibodies specific to the antigens on the pathogen of the desired disease.

The problem with this method is the fact that the human immune system is programmed to attack and reject cells that are foreign to the body. The monoclonal antibodies produced from the hybridomas contained mouse proteins, which caused them to be rejected by the immune system when administered to patients. The immune system was actually producing anti-drug antibodies (ADAs) to combat what it believed to be foreign invaders. Instead of being the “magic bullet” the medical community hoped for, these monoclonal antibodies therefore weren’t very effective and had created adverse side-effects.

The next step in the development in monoclonal antibodies was eliminate the mouse-derived elements of them. Scientists then genetically-engineered mice to have human antibody-producing genes, so that the entirety of the monoclonal antibodies used contain human DNA only. Therefore, the immune system would not recognise the antibodies as foreign and they would not be rejected. The efficacy of these antibodies was the best yet, and the negative immune responses they produce are reduced, however this varies depending on which drug is considered.

The refinement of monoclonal antibodies has meant they have many uses in the present day. A common use for them is pregnancy tests, as well as testing for allergens in food and diseases (e.g. HIV). Another area of medicine largely impacted by the development of monoclonal antibodies is cancer treatments. Monoclonal antibodies are used to transport and deliver drugs to cancerous tissues in the body. Their specificity allows the drugs to be administered to cancer cells only without affecting healthy tissues. Therefore with aggressive treatments such as chemotherapy damage to healthy cells can be avoided.

Monoclonal antibodies are continually being made more efficient and useful. They are a new frontier to scientific applications, with their uses seemingly being limited solely by the scope and determination of those researching them. Their development is a testament to “scientific detective work” and will help scientists solve the medical dilemmas of the 21st century.