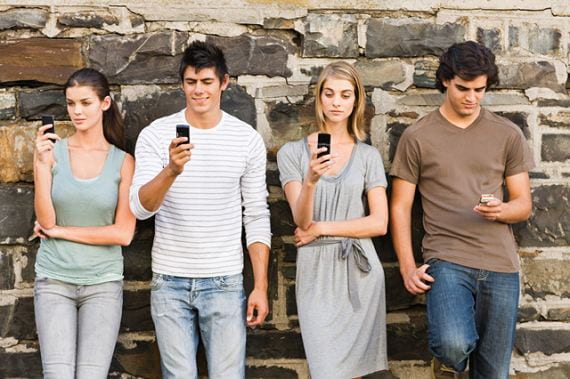 The world is suffering from a smartphone addiction epidemic. Humans are spending more time glued to their phones each day, and children as young as four years old are clinically addicted to technology.

Clearly this is a problem. More time spent on our phones means we have fewer hours in the day to carry out important tasks, such as revising, exercising, skill building and even socialising. But how serious really is it? I decided to ask some of my friends to send me their screen time data, which reports back how many hours, on average, you spend on your phone each day. Bear in mind that these figures only take smartphones into consideration and not computers or TV. I asked 31 people, aged 15-17, and compiled my results to get an average of 4 hours and 41 minutes per day. Let’s stop to think about this for a second. 4 hours and 41 minutes a day equates to 32 hours and 46 minutes per week. An average length novel takes about 6 and a half hours to read (at the standard pace of 250 words per minute). In 32 hours, we could read almost 5 whole books, go to the gym 32 times, or spend two solid days in person with our friends. Furthermore, across a year this data adds up to a whopping 10 weeks spent looking at a screen, or 2 and a third months. Imagine if your phone was suddenly taken away from you, and you were given 10 weeks of holiday instead (but no, you couldn’t share it on Instagram so did it really even happen?). Alternatively, you could watch every episode of ‘friends’ ever produced, 20 times over, or if you were feeling ambitious, and walked for 12 hours a day, every day for those 10 weeks, you could almost make it to the Netherlands in this time (supposing you didn’t drown on the way). Remember, this doesn’t even account for the more extreme numbers. People with an average screen time of 7 hours a day, which accounts for 7% of teens according to a study by the American Heart Foundation, could walk all the way to Norway, 900 km away.

I’m curious about where this addictive behaviour began. There is definitely a correlation between stress levels and screen time. I previously thought that people would be more likely to use their phone when they were stressed, as an escape route from the harsh reality of life. But after further thought I don’t think it is that simple. The more time we spend on our phones, the less we can get done, so workload builds up. This subsequent ever-growing list of jobs then continues to stress us out even more, causing us to seek mental refuge on our phones. It’s a painful and endless catch 22, and as with any addiction, we need to struggle to break these habits. We also use technology as a sanctuary for entertainment. During long holidays, it’s easy to get a little bored every now and then, and the thought of getting ready and going out can seem overwhelming or require too much effort. So instead we choose the easy fix. But what starts off as you watching your favourite YouTuber can rapidly take a dark path down a YouTube rabbit hole to end up with “Britain’s Got Talent 2007 highlights” or “Olaf funniest moments” on your computer screen 3 hours later, leaving you with the realisation that you’re bored, tired, and have done nothing productive the whole day.

Spending an hour on Instagram here and there can sometimes feel like a great idea in the moment but tends to lead to dissatisfaction later down the line. This could be why Instagram, snapchat, Facebook and twitter users have all reported a negative impact on their anxiety, depression, loneliness and FOMO due to the apps. Don’t get me wrong, social media can be a great way to spread messages, socialise and express yourself, and in times can even provide great emotional support, but the more time spent online, the more negative the effects become, and we all know these habits are hard to break once made.

Perhaps the overuse of apps like Instagram is partly down to our primitive need to be liked. Humans are pack animals, and essentially, back in caveman times, we needed each other to survive. Yes, we are no longer cavemen, but our anatomy is yet to realise that and we can’t evolve at a fast enough pace to keep up with the fact that we now live in a digital world. During the human race’s primate years, you had to keep up with the group standards and impress the other tribe members, or else you would be kicked out, which meant death. We still have that need to fit in to our society today, hence young girls tend to dress in pink and play with dolls, whilst boys couldn’t think of anything worse – if it isn’t blue, or vehicle related, they won’t have it. When we post a selfie online, and positive comments come flooding in, society’s given us it’s seal of approval, and we’re still in the tribe, hence that warm, happy feeling you get when you hit your most likes on Instagram. But with the positivity comes negativity. Sometimes you may post a photo that you love, and the response won’t be great. Just one negative comment can seriously knock somebody’s confidence, and due to the expansive size of social media, cyberbullying is a very common issue that can be detrimental to mental health.

The decrease in family time definitely plays a role in this reliance on the digital world. In previous decades, the older generations where the only place you could go to ask questions or get help, but these days, the rise of independence and curiosity of the youth leads us to google our questions or queries. Gradually, we’re learning to depend less on adults and more on ourselves and the internet, creating distance within families. This distance again causes more alone time which tends to then be spent on technology. Another frustrating dilemma to escape from is the correlation between time spent socialising in real life, and time spent indoors on our phones. It’s unclear which came first, but the more time people spend on the internet, the less time they have to go out and do social activities, which leads to them stay inside instead, and so on. Another endless cycle. Even if you as an individual want to go out to meet a friend, it’s not unlikely that they’re sitting at home on their phone so can’t.

These days, with screens all around us, it can be a challenge to switch off and see where our minds take us. While our parents would’ve spent a car journey thinking over all the clutter in their brains, trying to make sense of it all, we seize the opportunity to check up on everyone else’s lives, neglecting our own. In recent years the rise of mindfulness and meditation has definitely helped to counterbalance this problem, but we still have a long way to go. When the mind is busy and has no way to quiet itself, it’s up to dreams to settle us. Whilst we’re asleep our subconscious processes all the information from throughout the day, finding ways to overcome problems and strengthening powerful memories whilst clearing up space by forgetting useless things. But the blue light from technology reduces melatonin levels by up to 85%, taking us longer to get to sleep and decreasing sleep quality. On top of this, many teens are already up too late because of their phone. In other words, it’s a problem that causes another problem.

One huge problem with screens is that while we use them, we are most often sedentary, meaning we end up wasting valuable time sitting still and consequently neglect exercise. Obesity rates are rising every single year and it’s not a surprise when people are spending days on end without even leaving their house. Furthermore, the hunched forward position that we often take on when sitting down can cause back problems and unwanted pain.

I should also focus on some of the highs of social media. The most commonly used app in my data was snapchat, which is clearly due to the social aspect of it. I think snapchat is a great app to keep in contact with your friends and family, whether you’re unable to see them because they live too far away, or can’t drive yet but don’t want to spend the weekend alone, snapchat has you covered. It can also be a great place for minorities to flourish, whether you don’t feel like you fit in at school, or want to make friends with like minded, alternative people, you have access to literally millions of people through social media, which, although scary, is a great privilege that our generation has.

If you take anything away from this, let it be that by putting down your phone, you could free yourself 32 hours a week to do whatever you want. If you ever feel like you don’t have enough hours in the day, start with your phone and find ways to gradually cancel the time down. You could always walk to the Netherlands…