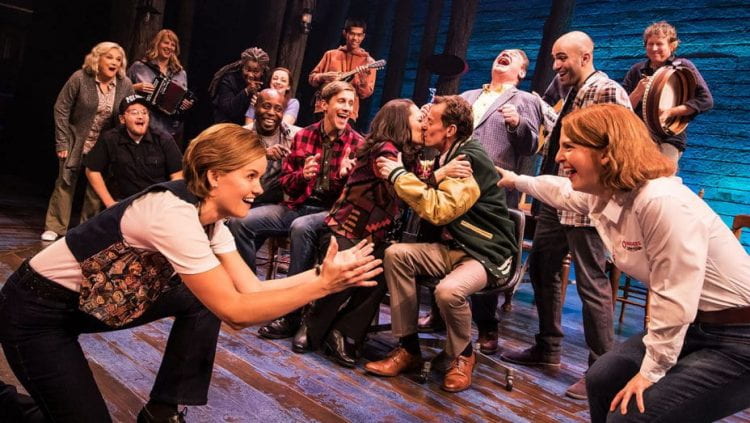 Come from Away is an astonishing musical which shows us that humanity and generosity can thrill despite tragedy in this miraculously crafted masterpiece by Irene Sankoff and David Hein. The story takes us to the small town of Gander in Newfoundland, Canada with 10 000 inhabitants which suddenly accommodated more than 3000 travellers stranded at its little airport due to the sudden landings of 38 planes as a result of the 9/11 attacks. Sankoff and Hein deliberately focused on the way the small community responded to the global tragedy that shaped the world we live in today in order to convey positive messages of care-taking and humanity. These powerful messages that were expressed through the emotional real life stories of Gander’s residents and stranded travellers warmed our hearts, but also reminded us that our actions have an impact on other people’s lives and highlighted the importance of being positive and open-hearted. 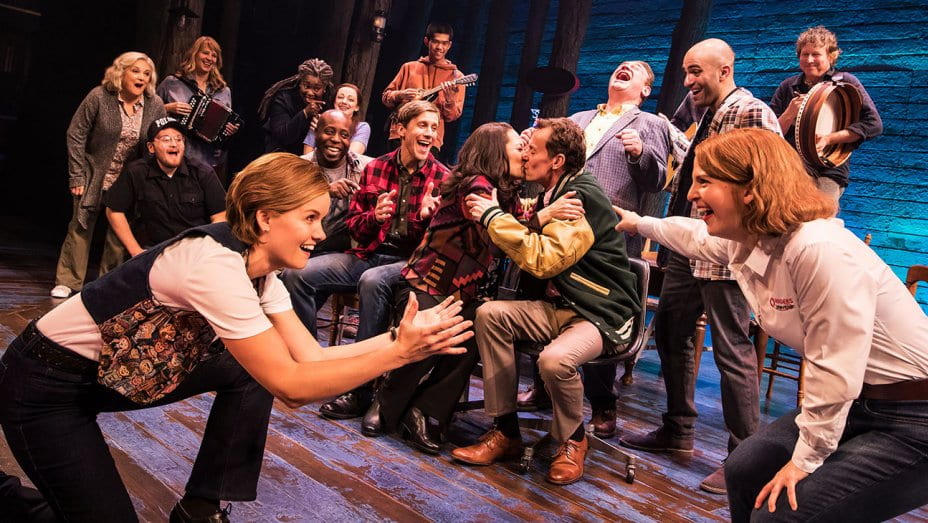 The originality of this breath-taking piece comes from its simplicity at every level. The ensemble consists of only 12 actors who successfully multirole to both Gander’s residents and ‘Come From Aways’ (a Newfoundland term describing people who visit Newfoundland) in order to convey their real life stories to the audience.  I was fascinated by the simple, but dynamic staging vocabulary in which the actors used 12 chairs and a few tables only in order to recreate different places. Through tightly rehearsed, fluid sequences the actors changed the position in which the chairs were set on the stage and immediately moved us from the narrow airplane aisle to the pub, for instance.  Therefore the bunch of ordinary wooden chairs on the stage became the town hall, church, plane, shop, school etc. throughout the performance which made it absolutely thrilling for the audience. The extensive use of lighting enhanced the scenes and the set design as it contributed to the creation of narrow places such as the airplane or open air places such as the park. The sophisticated lighting had another specific purpose; it helped to convey the meanings throughout the musical. For example, the pattern of 38 moving spots created on the stage at particular moment represented 38 planes that landed at Gander on 9/11.

The choreography for the musical done by Kelly Divine was very elaborate, with every single movement on the stage making sense and enhancing the message that was being conveyed. A particularly effective scene for me was when the actors were sitting on the chairs in a row as they were on the plane. In the first moment each of the actors brought particular energy and conveyed a different mood as they were carrying out different actions such as looking through the window with a big smile on their face, turning the air conditioning on by lifting their arm or looking for a wallet and the documents by checking their pockets in a panic. It looked very real as it effectively portrayed real-life people on the plane, but also highlighted Sankoff and Hein’s intention of showing that each individual who experienced being hosted in Gander due to 9/11 attacks was different. However, in the following moment all the actors suddenly leaned forward with their bodies in a unison in order to show the turbulence,  which was enhanced by the accent in the music and was in contrast to the previous moment due to the synchronisation of the movements. The musical was therefore brilliantly choreographed up to the smallest detail as the actors carried out small real-life actions, but also because the actors were dancing or turning around in canon, which added layers of complexity to the whole musical, leaving the audience amazed.

The musical ‘Come From Away’ has impressed me by its every element; from the vivid Newfoundland folk beat incorporated in the songs giving them an authentic Newfoundland sound to the simple use of chairs to recreate different places on the stage. This demonstration to the audience of how much can be done with so little emphasises the theme of the musical as the residents of such a small town of Gander helped to save so many people with its limited accommodation and food supplies. But above all I was amazed by how every element of the musical purposefully contributed to the messages of generosity and friendliness that were being conveyed. Even the multiroling itself had its particular purpose; by employing multiroling with the actors from Gander’s residents and the stranded travellers Stakoff and Hein wanted to show that at any minute we could be welcomed or we could be welcoming others.

The musical ‘Come From Away’ shows us the world tragedy, but from another angle. It is all about the wonderful things that happened the day after, showing us that people’s generosity and open-heartedness can transcend even the most inhuman and the darkest moments of history. This encourages us to be generous and humane to the people we meet in our lives reminding us of the positive impact each of us can have on others.