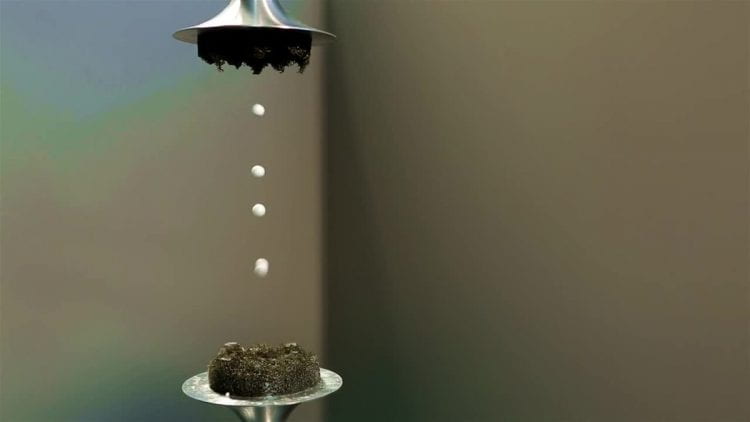 When standing beside a loud speaker you can physically feel the sound; your clothes vibrate. This suggests that the sound emitted from the speaker has force. Sound waves consist of high- and low-pressure regions and it is this pressure fluctuation which results in the force exerted on your clothes. As an engineer, the next step is to consider how this concept can be manipulated to make it useful. In this case we are exploiting it for levitation.

Sound is a longitudinal wave and it relies on a medium, such as air, to travel. This type of wave is composed of regions of compression (where the particles are closely packed) and rarefaction (where they are more spread). The particle vibrations are parallel to the direction of energy flow (wave propagation). Acoustic levitation uses high energy sound waves to oppose the gravitational force pulling the object downwards. 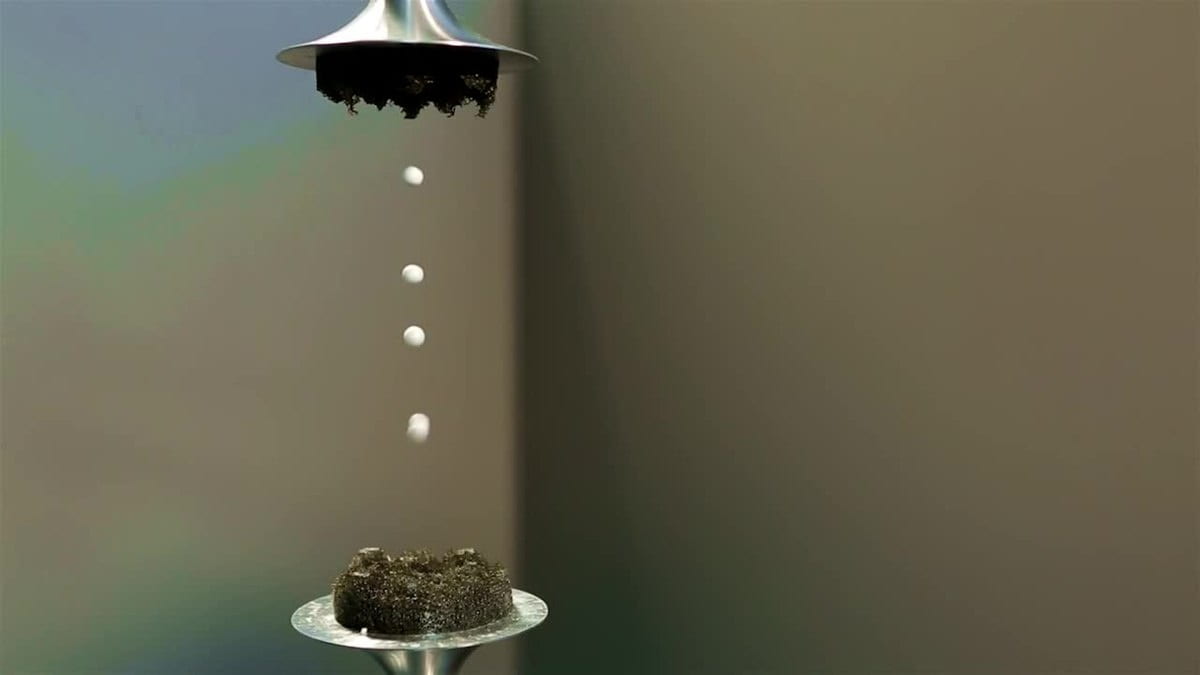 If a transducer, i.e. a speaker, is set up opposite a reflector surface, a stationary wave can be formed. The reflected wave is a progressive wave travelling in the opposite direction to the source wave. Because they both originated from the same source, they share the same frequency and have a constant phase difference, resulting in interference between the two waves. In a stationary wave nodes and anti-nodes are formed – areas of zero displacement and maximum displacement respectively. At the node is a low pressure/neutral region and at the anti-node, high-pressure. Nodes have no displacement so a particle at this exact point won’t experience any resultant force and it won’t move. At the anti-node, is the point of maximum displacement so a particle in this region would experience the largest vibration across the wavelength. The key to setting this apparatus up is calculating the distance from the source and the reflector so that the reflected waves meet the opposing waves in phase. This will ensure that maximum constructive interference is occurring (i.e. the waves are adding their displacement vectors together to achieve and even bigger amplitude). When the waves are travelling perpendicular to the ground surface, you might expect that when the light Polystyrene balls are introduced, they would move to the area of lowest pressure, the nodes, where there is least disturbance. However, on Earth, as previously mentioned, these sound waves are acting against the pull of gravity. The ball is trying to move down to the ground, but the high-pressure anti-node region below is forcing the ball back up. So, whilst it may appear stationary the ball is actually vibrating, at a very high frequency, just beneath the node.

In order to oppose the force of gravity, the sound waves must have an amplitude of at least 150 decibels (dB). If set at an ordinary frequency this would be unbearably loud – consider that a loud concert may be around 110 dB. To prevent this non-linear sound from damaging our ears, we use waves at a frequency above the human hearing range (ultrasonic) at around 22,000Hz, so that we can’t actually hear it despite the waves still being present.

Most of the setups you’ll see for this experiment will be in a single plane i.e. 1 dimensional. Recently, however, on my visit to Bristol University I was shown their development of a hologram with this technology. They had a 2-dimensional setup (to control the movement of the ball in both X and Y directions) allowing them to control the movement of the ball, essentially using a coordinates grid. With the help of mathematics, they could calculate the exact position of the ball at any time and calibrate a light to flash at these set points. By setting up a camera with a 20 second exposure (the shutter stays open to capture light for 20 seconds), the result is a neat light trail of the chosen image – in this case, Bristol University’s crest.

I think the most exciting part of this technology is the potential this has to change industry – particularly in cases where you don’t want to touch the subject. The most obvious application is medical – conducting surgery without having to worry about the size or steadiness of your hands or implanting substances/cameras into the body. Alternatively, it could be used in the manufacture of complex systems for products like computers and potentially even at the nanoscale. This technology is still undergoing rapid development and I look forward to seeing how it changes the world in the future