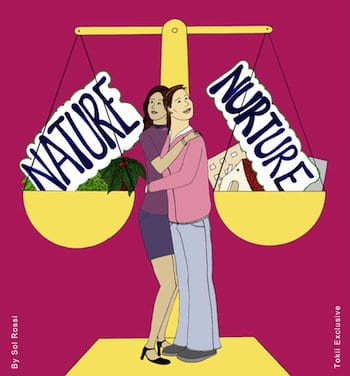 I read an article recently in the New Scientist by geneticist Robert Plomin who raised the debate of the parenting myth: ‘How kids are raised matters less than you think’. This made me think of a few issues with regards to how DNA and genetics are related to your overall behaviour rather than how you are raised by your parents and peers.

Body weight, personality and academic success together with our sexual preferences; are all factors that some people perceive as a ‘choice’ rather than how we are born and our genetics, which cannot be altered.

Religion also has a huge impact on the way people perceive whether people ‘can’ and ‘can’t’ be gay. I don’t believe being gay is a choice, I truly believe it is genetic and solely born from our DNA and genetic make-up, not how we are brought up. For example, there was a program a few years ago on the BBC which showed experiments of various children, girls who were given boys toys and boys who were given girls toys and dressing up clothes throughout their childhood and neither grew up as gay. Another example were sets of twins, the parents knew from an early age that one of the twins was gay.

They grew up playing with the same toys and wore the same clothes, they were brought up exactly the same way but one was gay and the other wasn’t. This obviously needs to be looked at on a much wider scale to show how nurture isn’t a factor in developing a sexual preference and I believe biologically we can show this through hormones as well, but whether this is acceptable and the use of people as guinea pigs to carry out these findings is a sensitive subject.

Are we trying to confirm that this is nature rather than nurture to prove the negative, homophobic groups wrong or are we doing this for our own benefit instead of those that belong in these groups? Either way, we need to make sure that any experiments of these groups are accepted by those that are affected. To stop the negative persecution that still exists of how someone should be.

Also, how much does religion contribute to homophobic views? My Grandfather was brought up in a strict catholic school, whereby he was caned for not attending mass on a Sunday at church. The school was run by nuns and his views are quite extreme and homophobic. He will be polite to gay people but he does not ‘agree’ with it. He thinks they have a choice and it is not how they are created. Even though the bible says ‘all things that are created are equal.’

Does this view come from how he was brought up ‘nurture’ and the fact that he has known very few people that are gay or been surrounded by them? Is it the era in that he lived and the fact that gay marriage etc was illegal? If he wasn’t brought up in this way and everything to do with sexual preference was legal would he still have these views? This is definitely nurture.

On another matter with regards to Nature Vs Nurture, The New Scientist states that ‘our propensity to be overweight, if zero means parents have no influence and one means total influence, when two siblings grow up together, their body mass index has a correlation of about 0.4. It’s easy to see how people attribute that mainly to nurture, because parents provide both siblings with the same food. But it turns out that isn’t true and obesity ruins in families for reasons of genetics. A killer piece of data is that the correlation for weight is 0 between adoptive siblings who grow up in the same family but don’t share genes. Even more striking is that if you were adopted at birth away from your sibling, you correlate just as much as if you had been reared together in the same family.’

This is another example that is very similar to my explanation of sexual preference, it shows that genetics have much more of a role than nurture does.

The New Scientist asks whether this is true for intelligence and personality too?

He states that twin and adoption studies have shown us that about half the difference between people in any trait you want to name is due to DNA differences and half isn’t. The effects of the environment are random. The implications of these findings are enormous because it means inherited differences are the major systematic force in making us who we are.

In conclusion, the DNA of a person can be assumed to have a bigger impact on various aspects of the child’s future than the way they are brought up. But their upbringing has a bigger impact on their views and how they perceive life. Whether this is seen as being right or wrong is viewed at that time and in that era as correct. The way they are is determined by both and with future studies, how much this is determined could be proven and will hopefully be a factor in a greater understanding from others and also contribute to reducing negative views of an individual due to gender, weight, sexual preference and intelligence. I believe this is an education that we should all learn and understand and we should all have an open mind and accept other views so that we can have a greater understanding of others.