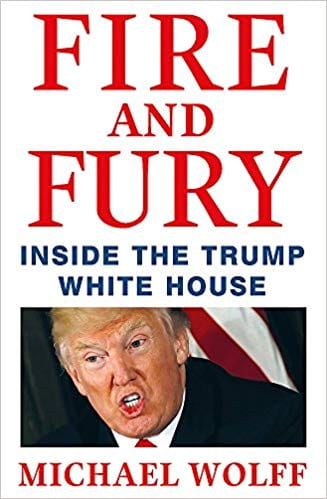 In response to the release of Wolff’s Novel, Donald Trump took to his infamous twitter account to express his anger and embarrassment about the book release

“ I authorized Zero access to White House (actually turned him down many times) for author of phony book! I never spoke to him for this book. Full of lies, misrepresentations and sources that don’t exist. Look at this guy’s past and watch what happens to him and Sloppy Steve [Bannon]!”

American Author and Journalist Michael Wolff projects an inside look to the US President Donald Trumps controversial inauguration and first 9 months of a stormy presidency.Michael Wolff’s Fire and fury is unapologetic and unmerciful. It depicts the childish, greedy and narrow-minded ways of a president and his staff in a comedic and witty way. Through Wolff conducting over 200 interviews with Trump himself and associates, public and private interactions previously unknown to the public are used as evidence throughout.

’Fire and Fury’ begins on election day of November 8th 2016 displaying the tensions of Trumps campaign team, Kellyanne Conway Trumps campaign manager and Steve Bannon as his chief executive (Fired by Trump within 7 months of taking office). Before writing about Trumps presidential win, Wolff smartly places controversial ‘thoughts’ of Trumps associates throughout the book, such as Conway a day before the election was in a ‘buoyant mood considering she was about to experience a resounding if not cataclysmic defeat’. Wolff furthermore gives us behind the scenes reactions of people in Trumps life throughout the novel, such as Model, ‘Brunch fanatic’ and now First lady Melania Trump after the news of Election night, was supposedly ‘in tears- and not of joy’.

The perception of Trumps childish and chaotic presidency is unchanging and one-sided from start to finish, but is smartly done in a way that is not unsurprising to the reader. By being British and reading this novel, it cemented my expectations of Trumps immature world. As shown by “time spent with Trump on the campaign plane was often an epic dissing experience: everybody around him was an idiot” and furthermore proving his inadequacies of being a traditional President, “I got as far as the Fourth Amendment before his [Trump’s] finger is pulling down on his lip and his eyes are rolling back in his head”

To conclude, Fire and Fury is a definite must read. Despite the obvious one sided sway towards anti-Trump, Wolff writes in a way that is not shocking to the reader and is hard to argue against. Donald Trumps behaviour throughout the book is one the public are able to see through his rallies and tweets, therefore making this book a 2nd piece of evidence of Trumps disorderly behaviour.Tara Tohill-Rogers, Year 12.