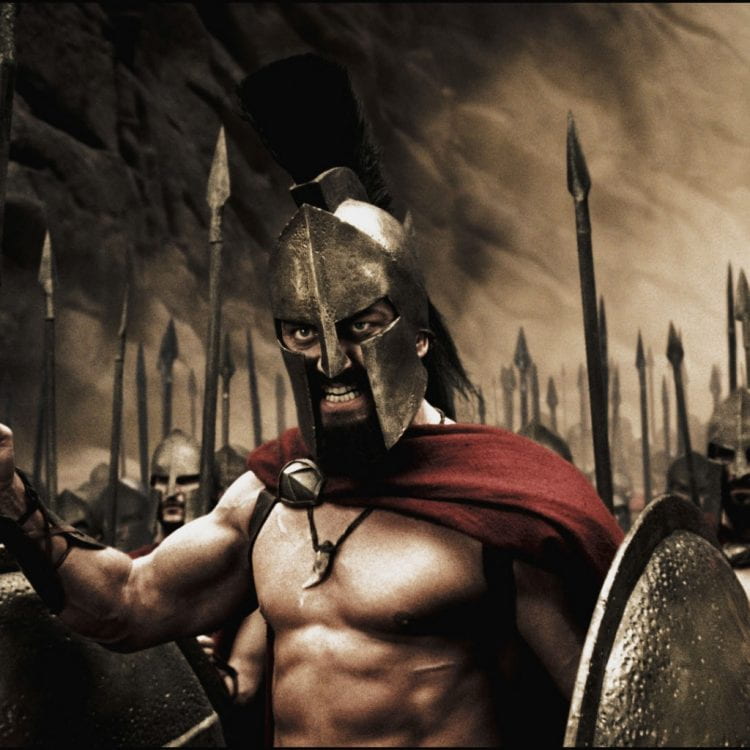 300 was directed by Zack Snyder who adapted the story from Frank Miller’s graphic novel. It was released in 2007 and outshone its budget at the box-office by around four times the amount, garnering an impressive 456.1 million dollars. The film depicts the events leading up to and including the battle of Thermopylae. The Protagonist is King Leonidas of Sparta who gathers his 300 Spartan hoplites to hold back the Persian invasion led by Xerxes I. The film is dramatized mostly in the same way the graphic novel was, this blog will compare the ubiquitous film to the real events. 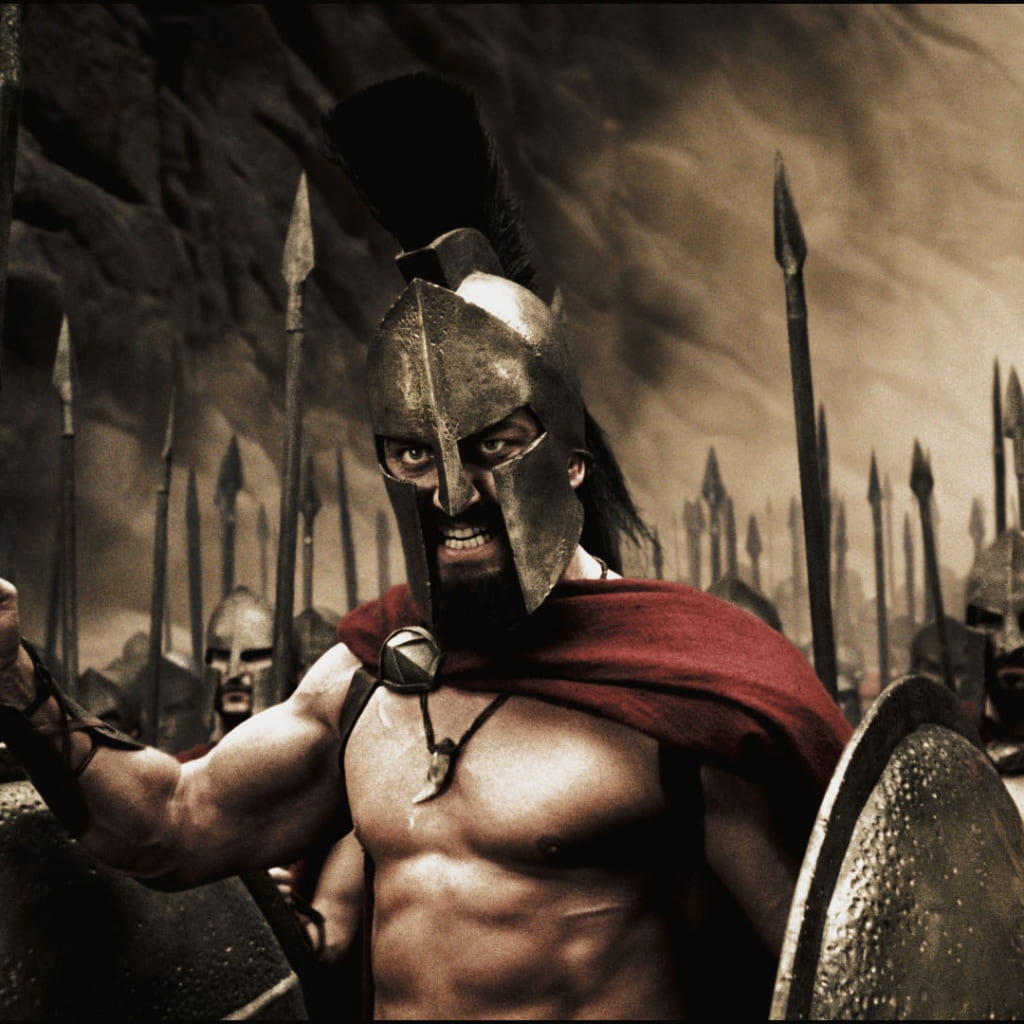 Historians have been able to decipher the works of Herodotus – often referred to as the “Father of History” –  who bequeathed to us his contemporary knowledge about the first and the second Persian invasions of Greece. The first of which is remembered for the Battle of Marathon and how, consequently, the race garnered its name. The second contains the Battle of Thermopylae and took place in 480 BCE which is when the film is set. The real battle contained around 7000 Greek soldiers hellbent on holding the pass at Thermopylae to save their cities from the infantry forces of the seemingly endless Persians who numbered around 100,000 – 150,000 by modern-day historian calculations despite contemporary sources pushing the figure to around one million. While Thermopylae is the main focus of the film, there was also a naval invasion which was stopped by Themistocles – a hero of Marathon. The second film focuses around Themistocles and his stalwart defence and takes just as many liberties as the first film in terms of historical accuracy.

At the start of the film, we see a baby who will grow up to become King Leonidas being inspected by a government official in order to decide whether he was fit enough to be a Spartan. This aspect of the film is accurate and recorded in detail by the historian Plutarch. If a child was deemed acceptable in terms of well-being and vigour, then they would be taken in by the state and the parents would have been instructed to raise the child in the honour of Sparta. If the child was unfit then it was taken to a spot by Mount Taygetus with a large declivity surrounding in it. The state believed that it would be better for themselves and the child if it dies early on if it was cursed with poorly endowed health. A barbaric notion by today’s standards and an aberrant, yet not unprecedented one, by Ancient Greek standards.

This gives Sparta the silhouette of an authoritarian Nazi-like state. While today we can place most political leaders of the past onto our political diagram, Sparta is more of an enigma. Deciding a child’s fate mere days after birth is certainly akin to Hitler’s disastrously strong belief in the Aryan race, yet Sparta’s women had a larger say in politics and more rights than some places in the Middle East today with Queen Gorgo – Leonidas’ wife – having a say in his affairs. It is very difficult to map Sparta’s policies into a simple political agenda group of the modern era. The Spartan’s were very accepting of promiscuity believing that as long as permission had been granted by the husband, then a wife could sleep with a man of her desires. This still had the warrior image emblazoned into it as older men believed that if a younger healthy man could impregnate their wife with noble sperm, it would benefit the colony as a whole.

Furthermore, Spartan boys did have to leave their homes at the age of seven as depicted in the film. This was to encompass the complete skill set of a warrior: hunting, military training, loyalty etc. However, this extended beyond some eleven-year military camp as it also raised the boys in the arts of dance and social preparation. The term used to describe this was agogewhich translates to “raising.” The Men were not permitted to eat with their wives until the age of 25 even though they were exempt from the training at the age of 18, the only exception to this rule was the song of a King meaning Leonidas would not have undergone the training. Instead he would have trained privately with more attentive instructors which would have led to him being a formidable opponent in the art of war and combat.

The film has Leonidas kill a wolf as a right of passage which would not have happened as the right of passage for a young boy was to sneak out in the black of night and kill a slave. If the boy was caught he was beaten until he could try again. The aim of this herculean task was to teach the boy the art of evasion. This was omitted from the film, like many barbaric facts, in order to make us side with the Spartans. By today’s standards, they were barbarians, yet it all depends on your definition of civility. As Sparta was a warrior state, it held these customs above the other Greek states and is plausibly the most barbaric of the lot. Alternatively, Sparta managed to outlast all other Greek states due to their warrior nature and their political landscape being barren of discourse due to it being regnant over the democratic Athens which fell to Sparta in the Peloponnesian War and later to Phillip II of Macedon; Alexander the Great’s father.

In the film Leonidas consults and Oracle at Delphi before the battle began. This Oracle told him that a King would have to die in order to save Sparta which was why, instead of fleeing, Leonidas fought to the death. This is mostly true as the Oracle was consulted as they consulted one on most matters and allowed the elders to decipher the cryptic messages that they left. Supposedly the Oracle did tell Leonidas that his death would save Greece, but this may have just been his interpretation less than a divine intervention which the Spartans would have left unquestioned.

Armour. In the movie, Leonidas is the only one to wear a feathered helmet – a plumed helmet. This would have been unrealistic as protection and unity was key among the Spartans. This is further reflected by their lack of clothing. All Leonidas and his men are shirtless with mere fabric to hold their loincloth in place. Actually, the Spartans wore full regalia as they would have needed the armour to defeat such a threatening force. This was dramatized as they would have been indistinguishable from far away and the lack of a chest piece allowed for more movement.

The antagonist Xerxes is portrayed as being a giant among men who, with the help of the Gods, became somewhat of an immortal. This, of course, is untrue and he would have most likely been average height. He would not have fought at the front of his army either and certainly not have had elephants. A liberty taken by the director to pay homage to Hannibal presumably. The film portrays the Immortals as an elite fighting force in black cloaks and silver masks. The immortals were a real army with a constant 10,000 member retinue with that number never wavering. However, the reason the Spartans were able to beat these ludicrous odds was due to their weaponry. The Greek’s were well armed and had stronger armour. The Immortals shield would not have been able to wi9thstand Spartan weaponry due to them being made of wicker much like the diminished Spanish forces being able to defeat the revered Aztec numbers with the use of cannons and muskets.

The Spartans fall in the movie like they did in real life with the treacherous Ephialtes telling Xerxes as about a mountain pass which allowed the Greek’s to be flanked. However, the film depicts the traitor as hunchback who was rejected by Leonidas while he was probably just a farmer seeking a reward from the Persians. In the same way that Shakespeare vilified and deformed Richard III, the same is done here to make us root for the Spartans.

Finally, it would be remiss to not mention the most famous moments within the film. The ubiquitous line: “This is Sparta” is used while Leonidas kicks a messenger into a large precipitous pit could be real. Herodotus records the throwing of messengers from Darius, Xerxes father, into a pit. While it is unrecorded whether Leonidas uttered the phrase, it is fascinating that something along the same lines truly happened. Leonidas cries “tonight we dine in hell” before fighting which actually did happen making his vigorous character truly memorable. It is apposite to mention the wit of the Spartans as one of their most famous responses comes from a soldier named Dienekes before battling the Persians at Thermopylae. He was told that the Persian arrows would “blot out the sun” and responded by saying: “We will fight in the shade.” Leonidas proved his wit as well when telling the Persians that if he wanted them to surrender their arms, they would have to come and get them. Sparta continued this wit centuries later when Phillip of Macedon threatened to invade claiming that “if I invade you will be destroyed…” and the Spartans responded with one word: “if.”

To conclude, the film is an enjoyable spectacle that piques the interest of those who watch it to discover the truth. It is satisfying to note that while the film is dramatized, there is still a lot of truth behind it thanks to the recordings of Herodotus in his now translated book: Herodotus: Histories. The Spartans remain an enticing enigma due to their world view and policies. A warring nation that lessons can be attained today making their history one of the most fascinating in the Ancient world.