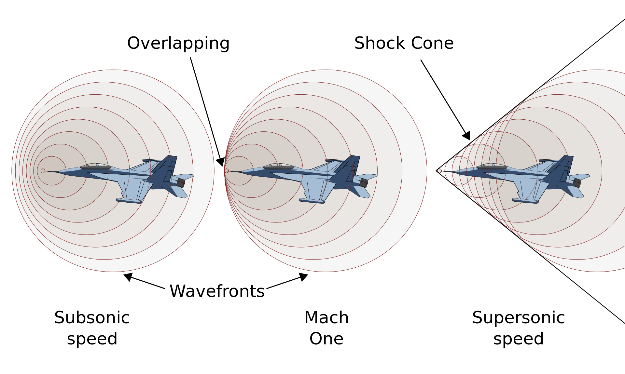 When a plane goes into super-sonic speeds a sonic boom is heard. The sound/pressure waves produced by the aircraft lag behind it (Fig 1.1), and as the waves are not faster than the super-sonic plane. The waves interfere with each other constructively, creating a large pressure wave which we hear as a distinctive boom. The same phenomena can occur with light – where an object goes faster than light in a medium: Cherenkov radiation.

Cherenkov radiation relies upon the phenomena of refraction – which is when light slows down when it enters a more optically dense medium (such as glass or water). The reason as to why light slows down (in a classical

sense, not a quantum mechanical sense) is that as light causes the charged particles in the medium to be excited. This is because light is an electro-magnetic wave, or a disturbance in the magnetic and electric fields. This disturbance in the electric field causes charged particles to become excited and release electro-magnetic (EM) waves of their own. The original light wave combines with these new EM waves, which has an overall affect of slowing down the combined wave of light. Therefore, light slows down in a dense medium and this is crucial for Cherenkov radiation.

The most common place to find Cherenkov radiation is around nuclear fission reactors. The reactor’s core is surrounded by water, which is an optically dense medium- hence light does not travel at 3×108 ms-1 (c), but at ¾ of its speed in air (2.25×108 ms-1). The reactor core releases small charged particles – such as electrons – when nuclear fission is underway. Electrons are able to travel at very close to the speed of light in a vacuum, and as these electrons have been given energy by the reactor, they could be easily traveling at 95% of c.

This wave front’s frequency, cause by the lagging of light waves, is often found to be in the blue end of the visible spectrum – this gives nuclear reactors their distinctive glow. 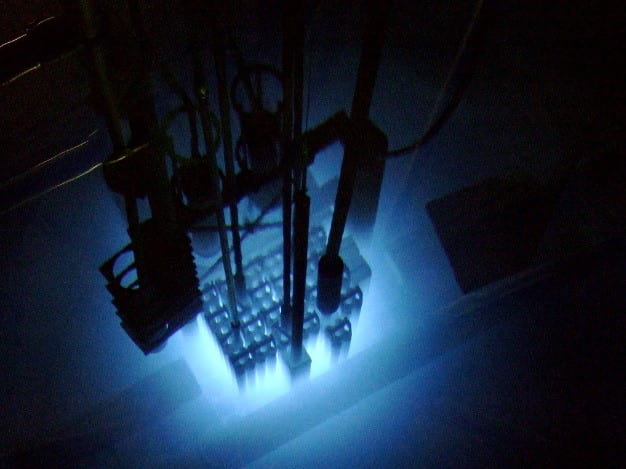 Besides from telling you whether or not a nuclear reactor is working; Cherenkov radiation can be used when researching fast moving sub-atomic particles.

Neutrinos are essentially massless, uncharged particles that are sometimes able to move through matter – hence they are extremely hard to detect. But at neutrino detection observatories, such as the ‘super-k’ observatory in Japan, Cherenkov radiation is used to detect neutrinos and information about them.

When neutrinos hit the observatory from space (they can be released in particle interactions in the sun), they are greeted with a large tank of water – containing electrons. When a neutrino interacts with an electron, another electron (or position) is released which is moving faster than the speed of light in water. This, as in the nuclear reactor, produced Cherenkov radiation. The radiation is then recorded by a ‘photomultiplier tube’ (which essentially converts photons into electric signals) and can be used to work out the direction of the incoming neutrino and how much energy it had.

Faster than the speed of light:

Einstein has yet to be found wrong with regards to the speed of light in a vacuum being the speed-limit of the universe. However, that is not to say that “nothing can go faster than light”, as under the circumstances shown by Cherenkov radiation, that is not true.

Cherenkov radiation is therefore light’s equivalent to a sonic boom, and is the reason nuclear reactors glow.