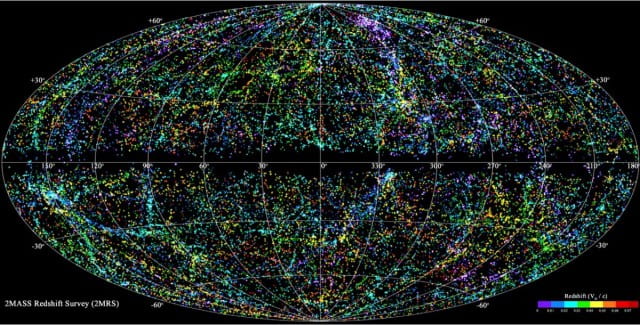 Asymmetry in the early universe

One of the biggest un-solved problems in physics is why there is more matter than anti-matter. The mere fact that matter exists shows us that we do not know what happened in the early universe – in those first few seconds. It is theorised that in the early universe the ratio of matter to anti matter was: 1010 +1: 1010. What led to this slight imbalance that ensured we existed?

No-one knows. In this article I’ll briefly explain one of the leading ideas around this asymmetry – it hasn’t been proven and there are many others. Some of the physics I will only briefly touch upon as it is very complex and requires a lot more knowledge and understanding of particle physics and mathematics to be thoroughly understood.

First, the simple answer which follows the laws of physics is that there isn’t more matter than anti-matter; matter is condensed into one region of the universe and anti-matter in another. But our observations do not support this.

Looking at the local region of space it is clear it is almost entirely made out of matter. When matter and anti-matter meet, they annihilate each other, giving out two high frequency gamma photons. We know that say our solar system is made out of matter only as when we touch say a table, we don’t suddenly annihilate nor did Opportunity when it landed on.  This leads us to conclude that the local region around us is made of matter – otherwise something would have been annihilated by now. But even farther afield, we know that all the local galaxies must be made of matter. As stated, earlier annihilation would produce large gamma ray bursts if it were to occur – and if the universe were made in equal parts matter and anti-matter then we would expect to see these bursts all the time, but we don’t. So, this has led us to believe there is a matter/anti-matter imbalance. But why is this the case?

In 1967, Andrei Sakharov postulated three conditions under which ‘baryogenesis’ could occur – i.e. that more baryons are produced than anti-baryons. Baryons are simply matter particles made of three quarks – protons and neutrons being the most common. Sakharov stated that in order for there to be more baryons the early universe must have allowed three things to occur: 1. That Baryon Number wasn’t conserved 2. That CP violation occurred 3. Interactions occurred outside of a thermal equilibrium. If all these three conditions are met, Sakharov thought that baryogenesis would occur – however we do not know if he is right. There are a few other explanations for the imbalance in the universe. But let’s stay with Sakharov and look at his postulate – and some other interesting physics along the way.

The first step states that baryon number has to not be conserved. In our day-to-day understanding of particle physics this is nonsensical. Baryon number conservation simply states that the total number of baryons before an interaction = the total number after. Baryons (protons, neutrons etc) have +1 (due to their constituent quarks being +1/3 each) and anti-baryons (anti-protons, anti-neutrons etc) have -1. For ever interactions this is true – besides one potential interaction.

Chiral anomalies have been hypothesised to occur at very high temperatures – similar to those of the early universe. These types of interactions can allow baryon number to not be conserved. These interactions themselves are very complicated, any have only been hypothesised, but involved chiral currents. These are basically ‘left or right handedness’ of particles, where a particle’s mirror image is not identical to the original particle. If you think along the lines of optical isomers in organic chemistry, the same idea applies. Chiral anomalies can occur, meaning that the chirality of a particle (‘left/right-handedness’) is not conserved and in doing so can breach other laws of physics – including baryon conservation.

CPT symmetry is another perceived constant in physics. It was built out of two smaller symmetries. Symmetries in physics are similar to those in mathematics, for example if we mirror all the charges of a system, so that they’re all swapped, the system should behave the same. This is C-Symmetry

C-symmetry states that if charges of a system were swapped, the interaction would still continue to behave in the same way -basically it doesn’t matter what we call positive or negative. This makes sense, and in the strong, gravitational and electromagnetic interactions C-symmetry holds. The problem lies in the weak interaction. In some weak interactions, particles do not behave in the same way if all the charges were swapped. This led physicists to produce CP-symmetry.

CP-symmetry states that C-symmetry can be violated if parity stays the same. Parity again looks that that left/right-handedness of a system. If we were to put a mirror up against an interaction, it would behave the same way in the ‘mirror’ world as it would in the ‘real’ world – there would be no-way of seeing if it were in the mirror world or not. But again, for weak interactions involving Kaons, both charge and parity symmetries have been violated – they do not behave the same way with opposite charge, and you can tell if it is the mirror world or not. So, this led physicists to produce CPT symmetry.

CPT symmetry states that one of Charge, Parity, and Time must be symmetrical in an interaction. That there can be a breach of CP symmetry, but if the interaction occurs the same way both forward and backwards in time, then it is valid. Or CT can be violated but P is kept the same. CPT symmetry so far holds up – but also means that there are some interactions which do not occur the same way both forwards and backwards in time.

Looking at CP violation for baryogenesis, it shows us why there is more matter than anti-matter. If C violation did not occur, there would be equal amounts of protons (+1) and anti-protons (-1) say, as charge would also have to be symmetrical. C-violation occurs in our physical world, so we can have more protons. We also need P-symmetry to be violated, otherwise we would get the same number of left-handed baryons as left-handed anti-baryons (and the same with righthanded baryons). So now, thanks to Baryon number violation and CP violation, we can get more baryons than anti-baryons. But why do we need a thermal imbalance.

According to Sakharov, if the three above conditions were met more matter is produced over anti-matter. The idea of thermal equilibrium and CP violations have been observed, so we know that they can occur and could have led to the matter imbalance. But chiral anomalies have still not been observed – which could mean baryon number violations never occurred – putting the hypothesis to rest. Only experimental data can prove this – and is one of the biggest problems that needs to be solved.

But what if Sakharov is wrong, and baryon number (as we know it) was conserved. This leads to some of the other theories revolving around the matter/anti-matter imbalance – and would probably also rely upon CP-violations to occur. This is one of the biggest unsolved problems in physics – something we know at the moment must not be entirely true – otherwise we wouldn’t be here.

Baryogenesis is one of many unsolved problems in physics – but once solved we will not only know why matter exists but might also show which of our physical laws are not entirely true.