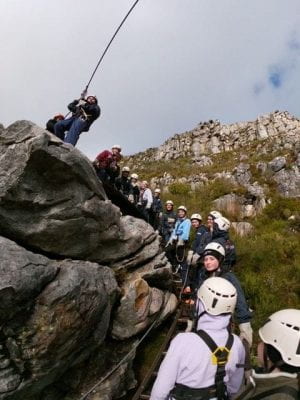 At the start of the day everyone was filled excitement but nerves at the same time. After the early morning it made to be a very quiet journey to the canopy tour. After our quick debriefing for the safety we set off up the mountain on the very bumpy journey, the local staff called it the ‘African massage’, and they weren’t wrong as the rough ride sure did wake us up.  Half scared that we would fall out the 4×4 which didn’t own seatbelts or windows; however, the breath taking views were gorgeous.  The mountains and greenery which complimented the terrific blue sea, which could just be spotted in the background, and the clouds which surround the top of the mountains finished off the most perfect view.

When we got to the top, everyone was ready to jump off!  The adrenaline was high, but everyone was ready to leap. After we all worked out that we wouldn’t fall, we could take in the even more outstanding views, the wind, the quick speed of the zipline made for a thrilling time.  We went over a water fall which couldn’t be faulted, the relaxing sound did settle some nerves, so everyone enjoyed. Around the 4th zip wire from the end we started to feel the cold wind, but when walking over the wobbly bridge over the river at about 200m high we soon got warm again. The final zipwire was the best by far, everyone was feeling comfortable to jump off, or a least push off the starting platform.  It was also 330m long so you could enjoy the view and enjoy the speed of the ride through your hair. But it wasn’t all over when we finished all the zipwires as we had a 1km walk back up to the track where the 4×4 was able to pick us up. The climb was hard but doable; it was a steep incline but everyone got through it with a smile. We soon got back in the 4×4 and we all really appreciated the hot pies (springbok, feta and spinach or chicken) when we got back to the Centre. Overall, we all had an amazing day up in the mountains and all had an experience of a lifetime. To finish off the day, we ate at The Greek Fisherman on the waterfront in Cape Town and thorough enjoyed our evening meal – the food here is delicious!

After a much appreciated longer lie in and later breakfast, we all headed out to the township of Langa, fifteen minutes away from our hotel. We were all quite apprehensive approaching Langa; however, after seeing the waving children as we drove by and the immediate hug we all received by the young girls as soon as we got off the coach, we knew we were in a very welcoming community. This was only proved further as we went into the township. More young girls followed us whilst touring, meaning there were many hugs all round and almost everyone we saw gave us a wave, a smile or a greeting. Our guide mentioned that many citizens choose to set up businesses that benefit the community, only reinforcing the warm and supportive atmosphere that we experienced there. We soon discovered that Langa was the oldest township you could find in South Africa having formed in 1926 but was also one of the smallest, only having a population of around 10,000 people. It was a vibrant Christian community with many churches and also plenty of schools. Our tour guide kept mentioning how Langa is a very sporty community and this was reflected in their facilities and successes. They had a hockey Astro, netball courts, rugby pitches, football pitches, tennis courts and a swimming pool and had produced national representatives for South Africa in rugby and hockey. We learnt about the boys’ education from when they were sixteen that lasted eight weeks. Within these weeks they faced a series of challenges including surviving eight days on only dry food and no water! We also visited a local artist whose style was predominantly using sand for all his work. He gave us a short but impressive demonstration of his work and many of us bought his pictures. On our bus tour around the township we were introduced to their food motto which was letting nothing go to waste. Therefore delicacies included sheep head ( our guide recommended putting salt in the eyes for better flavouring) and chicken feet. We soon headed to Shelia’s cafe where we were greeted by a band playing some lively South African music and even got some of us to play their instruments. Shelia gave us an extremely warm welcome and expressed her gratitude for us helping her community which we were all very touched by. We then had a delicious buffet lunch of traditional South African food. After that it was straight on to play against the local Langa netball teams. For all our teams, it was their first time playing as a team however, we all soon settled into our roles and performed well as a team. There were unfortunate losses for the both the B and C team with both teams putting out solid performances against the Langa teams but both walked away from their matches knowing what they needed to do to improve. However, the A team has put in a fantastic performance to secure a win over the Langa team. Overall, we had a really enjoyable day seeing a different side of South Africa and interacting with the local community as well as playing our first fixture of the tour.