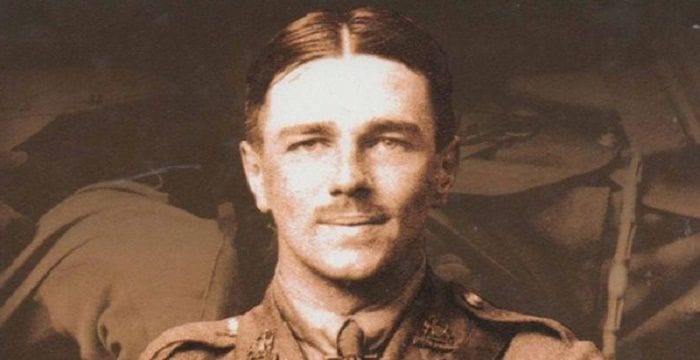 ‘How does Wilfred Owen write about war?’

‘Dulce et Decorum Est’ is an extremely well known first world war poem written by Wilfred Owen. The poem was based on his horrifying experiences in the trenches of the ‘Great War’. Owen was an officer in the second Manchester Regiment with a passion for Romantic poetry. However, after suffering from severe shell-shock, Siegfried Sassoon inspired him to write detailed and bitter accounts to inform the reader of the pure monstrosities of war. Other works of his include: ‘Anthem for Doomed Youth’, ‘Disabled’, ‘1914′ and others.

The theme of the poem is essentially the reality of war on the front line and how dying for your country is not at all glorious but very far from it. In fact, it is horrific and abhorrent. The purpose of the poem is a public attack on the Generals, propogandists and anybody who entertained the idea that it was glorious to die for your country. Owen achieves this by writing vividly about the gruesome death of one of his comrades during a chlorine gas raid and how that affected him. He goes into such detail that by the end of the poem it leaves the reader shocked and deeply moved. On reading the poem, we could only assume that the Generals and high-ranking leaders would be left intensely uncomfortable and embarrassed at how they had acted towards their men.

The poem opens with a description of the men staggering away from the front line, hardly able to breathe, exhausted and many barefoot. In verse two, a sudden gas attack panics the men who manage to strap on their masks at the last minute, all except for one unfortunate soldier. Own describes the man’s frenzy of panic in detail and how he is forced to watch helplessly as his friend begins to choke to death in the corrosive gas fumes. In the third verse, only two lines, Own describes the same man’s final moments in his own nightmares ever after. Although short, this verse has great effect. In the final verse, Own addresses the readers directly, forcing them to vividly imagine that they too are walking beside the cart bearing the dying soldier. He makes them witness the sight, sound and even taste the awful death by chlorine gas. In the final sentence, Owen asks the reader to reconsider if they thought it was glorious to die for their country.

Throughout the poem, Owen uses powerful language to capture the real horror of life and death on the front line. The poem opens with a striking comparison ‘Like old beggars under sacks…coughing like hags’ to describe the sad state of the battle-scarred men marching away from battle. Owen adds some effective metaphors. ‘Blood-shod’ is used to describe the men’s feet, caked in blood instead of boots. The men are so exhausted that it’s if they have lost control of their lives like drunkards. They are ‘drunk with fatigue’. The alliterative phrase ‘knock- kneed’ conveys the huge difficulty the men are having in moving forward in the river of mud. The onomatopoeia, ‘trudge’ reinforces this further. The men are described as ‘blind’, ‘drunk’ and ‘deaf’. This is use of hyperbole to exaggerate the way the men’s senses have been ripped from them by war.

The strength of the language continues into verse two. It opens with ‘Gas! Gas! Quick, boys!’ Owen uses direct speech to draw the reader into the moment and exclamation marks to emphasise urgency. As the men try to fit their gas helmets, Owen uses an interesting phrase ‘an ecstasy of fumbling’ In a very negative situation the usually positive word ‘ecstasy’ is chosen to highlight the reassuring realisation that they have the equipment to deal with this. However, one man was too slow and the verbs ‘yelling’, ‘stumbling’, ‘flound’ring’ and ‘drowning’ describe his terrible struggle against the gas. In the third verse he is also ‘guttering’, ‘choking’ and ‘drowning’. The use of the gerund form suggests that it is happening now, right in front of the readers’ eyes. ‘Flound’ring like a man in fire or lime’: through that single line, we can simultaneously picture him burning, drowning and dissolving. The suffering is in three horrific ways. ‘Flound’ring’ like a fish out of water and the final line of the verse; ‘as under a green sea, I saw him drowning’ suggests that he is drowning in the gas. ‘Like a man in fire or lime’ the simile shows him burning and dissolving as the gas eats away at his insides. Finally, in this verse, the way Owen seems to be seeing him “through the misty panes” suggests that the dying man is distant, Owen can’t get to him. Verse four is very short by contrast. Owen explains how ‘in all’ his ‘dreams’ he relives this dying soldier lurching towards him ‘guttering, choking, drowning’. It is his recurring nightmare. Strong imagery continues in the final verse so that the readers vividly experience the horror of choking on gas. Alliteration such as ‘white eyes writhing’ helps us to see his panicked eyes desperately looking for some escape. And ‘sick of sin’ indicates that the soldier is tired with life and all he wants is peace. ‘Writhing’ is also an onomatopoeia as is ‘gargling’. These words help us to hear his suffering. We can also feel his suffering when Owen uses the adjective ‘froth-corrupted’ when describing his lungs. The metaphor ‘his hanging face’ and the simile ‘obscene as cancer’ are strong images of disease and imminent death. Owen directly addresses the reader at the beginning and end of the verse to make it clear that the poem is aimed at us. And the final few lines ask us if we really think that it is glorious to die for our country.

Most of the poem is written in the iambic pentameter rhyme scheme, which sounds like a heart beat when read aloud. I believe that this resembles the beating heart of the dying soldier despite his lungs in panic. It isn’t completely consistent, just like a dying person missing a heartbeat. The scheme is briefly broken when Owen says ‘Gas! Gas! Quick, boys!’ because this is a moment of complete shock therefore it’s like the soldier’s heart has stopped in terror. Also, in the second verse, the rhythm of the two-part verbs ‘yelling’, ‘stumbling and flound’ring’ and then again at the end of the verse ‘guttering, choking, drowning’ are in the present tense which makes it seem like it is happening right in front of the readers eyes. It also slows down the rhythm of the poem so that the readers really take notice of the soldier’s terrible predicament. By contrast, the enjambement after ‘stumbling’ helps to speed up the action, there is no pause. The rhyme scheme of the poem is alternate lines. For example, lines one and three (sacks and backs), lines two and four (sludge and trudge).

The poem is memorable and shocking in its gory details. Vivid language like ‘the blood gargling from the froth corrupted-lungs’ and similes like ‘a man in fire or lime’ really show the disgusting truth of The Great War. In the final lines, Owen tells the readers not to believe the lie told to many ‘Dulce et decorum est Pro patria mori’. The irony really achieves its purpose. It is horribly clear that it is not ‘sweet and glorious’ to die for one’s country.