Welcome to my blog on antimicrobial resistance which has been written from my ten minute presentation that I delivered on the topic both in SES medical society and also in a Y12 1532 society meeting.

Today I shall be covering four main areas. First of all, why should any of you care or read this blog, then what actually is antimicrobial resistance and how does it occur. This will lead onto the explanation of what our global healthcare crisis entails, and I will finish with the possible ways we can tackle it as a species.

But first some key definitions and clarifications. First, the definition of antimicrobial resistance which is: Antimicrobial resistance (AMR) is the ability of a microorganism (like bacteria, viruses, and some parasites) to stop an antimicrobials (such as antibiotics, antivirals and antimalarials) from working against it. As a result, standard treatments become ineffective, infections persist and may spread to others. (WHO Definition).

Just clarify the key points of this definition, antimicrobial resistance occurs among all microbes ie bacteria, viruses etc not just bacteria. Secondly antimicrobials include antibiotics and antivirals, basically this means the most modern forms of treatment which kill any microbes associated with the patient’s disease. And finally, the main consequence is ineffective treatment.

A mutation is also a definition that will come in handy and it is: A gene that is damaged or changed in such a way as to alter the genetic message carried by that gene.

Finally, there is the definition of a gene: a gene is a unit of heredity which is transferred from a parent to offspring and is held to determine some characteristic of the offspring.

Any other definitions needed I will make crystal clear when I come to them but if they were listed now you may not remember them out of context.

To begin, why should you all care enough to listen to this talk? Well I can guarantee that most if not every single person reading this has been on a course of antibiotics or had an operation in which they were given a set dose of antibiotics in their life.

If you haven’t been on a course of antibiotics, then you will do at some point in the future. I can say this with almost 100% certainty due to our large lifespans. Antibiotics or antivirals will probably save your life. This is due to the fact that during any operation, antibiotics are essential to prevent sepsis (bacterial blood infection) which can easily kill patients. Furthermore, routine blood bacterial infections that many people experience today and influenzas (viral infections) are easily treatable, but without antimicrobials can be lethal.

Why is this the case?

Well, you have all heard of penicillin? If not then all you need to know is that Sir Alexander Fleming discovered penicillin (the first antibiotic) in 1928 by accident and since then it has revolutionised healthcare and is one of the main drivers of our longer lifespans.

Before that even in the early 20th Century, infant mortality rates were such that one in 20 babies would not make it to their first birthday and the average middle-class man would live to about 45 (with industrial workers at half that). Today the average is 70 years globally and more in western countries.

This world with high infant mortality and half the average lifespan, may return in our lifetimes if we do not take action.

To understand how this horrific past could soon become our present we must understand what antimicrobial resistance actually is. Now of course the actual mechanisms vary hugely from bacteria, to viruses to parasites etc but the outcome is similar. The definition according to WHO goes as follows and is the definition you saw earlier. Antimicrobial resistance (AMR) is the ability of a microorganism (like bacteria, viruses, and some parasites) to stop an antimicrobials (such as antibiotics, antivirals and antimalarials) from working against it. As a result, standard treatments become ineffective, infections persist and may spread to others. (WHO Definition).

On this diagram you can see a clear example of mutation, antibiotics are used and kill of all bacteria except a few that have mutated resistance genes. These bacteria survive, replicate and take over bodily tissues etc.

Right at the end however at stage 4 all of you can see one example of acquired resistance but I shall explain this using the next diagram. 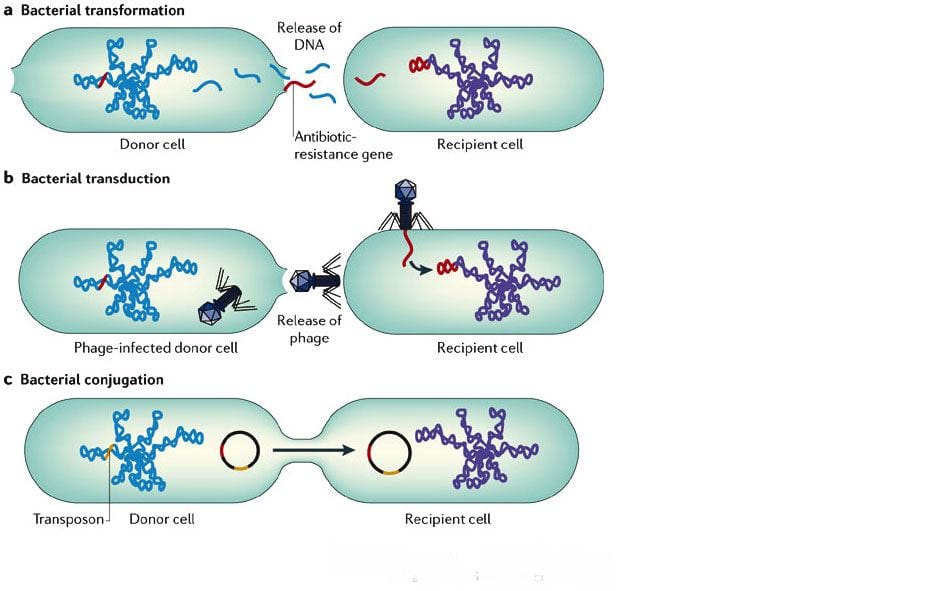 These are three ways bacteria can acquire resistance.

Conjugation: Two bacteria can pair up and connect through structures in the cell membranes and then transfer DNA from on bacterial cell to another. (rings are plasmids).

Transduction: There are viruses called bacteriophages that can infect bacteria. These viruses sometimes bring along genes that they picked up during infection of another bacterium. These genes may then be incorporated into the DNA of the new bacterial host.

Transformation: Some bacteria can take up pieces of DNA directly from the environment around the cell.

Some of you may be wondering why I dedicated a diagram to acquired resistance. Well its due to the fact that, yes, mutations are not good for healthcare as they mean certain antimicrobials may not work. But you can just use other antimicrobials. Eg if John’s food poisoning bacterium develop resistance to his current antibiotic then doctors can prescribe a different one or even a combination of treatments which usually kill the bacterium. However, the main issue we are facing today is the rise of superbug, which are multi-drug resistant microbes.

These microbes, especially the worst, do not develop these resistances through mutation alone (the odds of one bacterium developing many mutations to be resistant to many drugs is very rare).

Instead they gain these resistances through the methods mentioned above which allows for many resistant bacteria to create bacterium that can only be treated with one antibiotic or that, in the future will be untreatable.