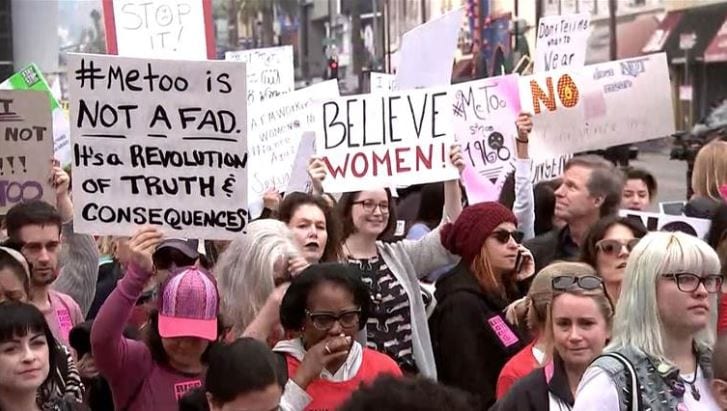 Who here feels as if they are directly affected by the MeToo movement? I’m guessing not many of you. It’s just something we see on social media and on the news, but we never really feel the direct effect of, especially living in our little Stamford bubble. What you may not realise, though, is that each and every one of you are indeed affected by the movement. Luisa addressed how the movement helps victims, and I’m here to tell you how the movement positively affects you – the wider society as it affects the government, younger generations, the LGBT community, and men.

The MeToo movement has had a positive impact and must continue for it to take effect in other nations. Because of MeToo and the conversation it creates, new sexual harassment protection laws are taking effect in 11 US states – although not every state has started making changes, the fact that many have shows MeToo’s productivity and proves that the movement must keep going to make sure laws are made in every single state. The Times Up movement, created in response to the MeToo movement by Hollywood actors, raised $21 million in just 1 month for their legal defense fund to support those who suffer harassment, abuse, or assault in the workplace. From October to December 2017, calls to the Rape, Abuse & Incest National Network – a US crisis hotline – rose by 23% compared with the same period in 2016. 1in6, an LA based group that supports male sexual abuse survivors, saw an increase of 110% in web traffic and 103% in usage of its online hotline. Something that I found very interesting was that when reading an article from May 2018, the author states that although MeToo has taken effect in many countries, some countries with less free press coverage haven’t had as much resonance with the movement yet, using South Korea as an example. Little did the author know, only a few months later, the South Korean government announced a new measure to combat sexual assault in the workplace by increasing maximum prison times. This is clear evidence that the movement is working and affecting people from all over the world in order to give them a safer life.

What I think is perhaps the most important thing about the movement is how it can educate future generations. Over Christmas, I started watching the film Anchorman starring Will Ferrell. Although the film had some funny moments, what I couldn’t help but notice were the amount of sexist jokes from the male characters to the female characters. Many old TV shows and films create comedy by having men make jokes that perhaps at the time were seen as okay, but are now widely regarded as sexist. One example is Al Franken. Franken was a US Senator and comedian who was photographed pretending to hold a woman’s breast as a joke. Franken didn’t actually touch her, but by joking about sexual misconduct, Franken is setting a bad example and in a way normalising it. Later, Franken also was charged with sexual misconduct allegations after touching women’s breasts and forcibly kissing them, and his attorney said that his behavior was that of an entertainer, not a Senator. It seems as if people seem to think it is ok for sexist jokes and behavior to happen if it is used for humor – this is absolutely ridiculous. What kind of example does that set for younger generations? If a child sees their idol or their favorite character make a degrading joke, why wouldn’t they? We believe that the MeToo movement is so important because the sheer scale of it can help prevent sexist content from being created. Unfortunately, it’s hard to change people’s way – especially older generations. But if we can use this movement to positively affect younger generations, why shouldn’t we? By making it clear to young kids that sexual harassment is not okay, they can be taught from a young age how to act, and that even joking about sexual misconduct has its consequences.

We also believe that MeToo could lead to advancements of society accepting the LGBT community. LGBT communities are at a higher risk of sexual assault – 47% of trans people report having experienced sexual assault at some point in their lives. 47%. That’s nearly half. After doing some research, it seems as it trans people are attacked more as their attackers see them as invalid, and use that to actually blame the victims for what is happening to them. Although the movement right now is dominated by cis straight women, starting a conversation around these issues can ultimately help LGBT people. Founder Tarana Burke says “Queer people…around the world who are also chiming in – we have to pay attention to them too”. I think that the MeToo movement can really help other minority groups as it is breaking gender roles and stereotypes. By fighting against sexual assault of all people, the LGBT community can feel much safer as they were a majorly targeted group. Also, by breaking down male gender roles, gay men can hopefully be accepted more as there will be less “roles” that you must fulfill to be a man. When you click onto the MeToo movement website, you’ll notice a video of people’s faces in the background. And these aren’t just cis white women. These are people of different ages, races, and genders all coming together in a supportive community fighting to break down the stereotypes that society gives us.

Another way that the MeToo movement positively affects wider society is how it breaks down gender stereotypes. I am not disregarding the fact that men can be sexual harassed as well, but the majority of cases are women. For example, 82% of child sexual abuse survivors are female. Many men, and probably some of you, feel attacked by the movement. Although the movement is targeting sexual offenders, by the way society works and how we perceive gender and masculinity, all men are being affected. But that doesn’t make the movement ridiculous at all. What I think is really great about the movement is how it can break down these gender stereotypes. We live in a society where “gay” is used as an insult. We live in a society where you are told to “man up”. We live in a society where men aren’t allowed to be emotional, to be vulnerable. The MeToo movement is an example of women standing up for themselves and proving that their gender stereotypes are no longer prominent. By breaking down female gender stereotypes, male stereotypes as the dominant, powerful figures are also being broken down. Through MeToo, we can create equality between men and women, allowing both to be powerful figures who are allowed to be emotional as well. I think it’s about time that we have a world where men are allowed to be as vulnerable as women and not feel ashamed for it.

I hope that we were able to prove to you just how important the MeToo movement, and how far from ridiculous it truly it. In the words of founder Tarana Burke, “It’s beyond a hashtag. It’s the start of a larger conversation and a movement for radical community healing.”