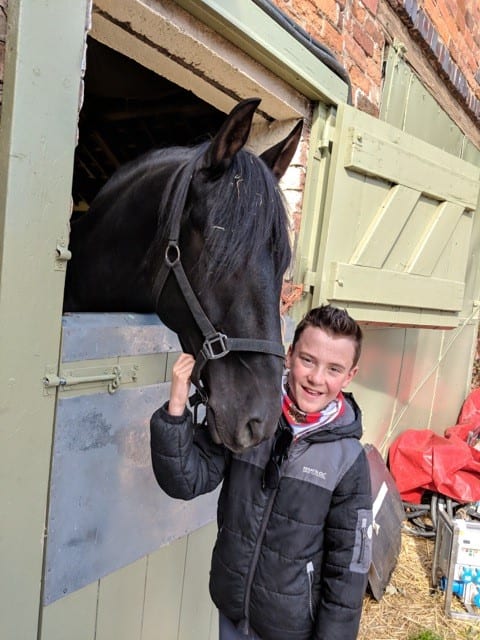 In October 2018, I was lucky enough to be chosen as a stunt rider for a Netflix originals series called “Free Rein”. There are already two series out on Netflix; it’s an Emmy-award winning show aimed at 8-12 year olds, who love horses! 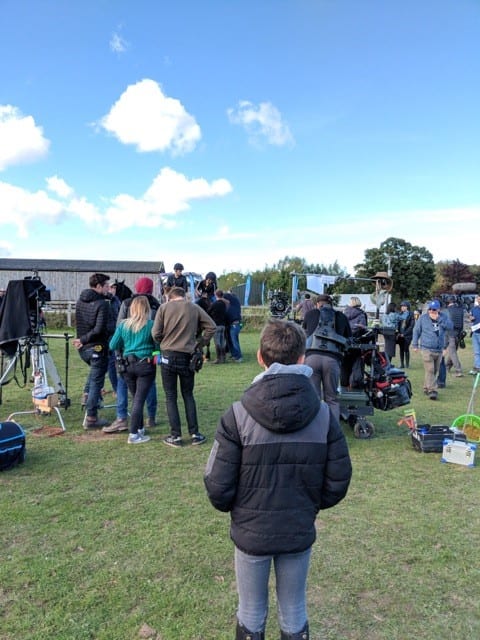 The series needed an experienced child rider who was the right size to match the actor and my mum had seen an advert online asking riders to apply. Actors, even if they ride a bit, aren’t allowed to do all the riding scenes, especially the more dangerous ones as they are too important, and this is where a stunt rider comes in. We just needed to send photos of me jumping my horse and a video of my riding and my measurements, and then after a short selection process I got the job!

First day my mum drove us to set, Brightfields Stables, which is located just next to the welsh border. After a 114-mile drive, we arrived and met up with the horse team. This consisted of Billy, Callum, and Chris plus a few others. They all work for Steve Dent Stunts https://www.youtube.com/watch?v=XM3i_xwwPNs and I got to meet Steve on set. He is a stunt coordinator and film director and his company trains and supplies horses and stunt riders to the film and TV industry; they have done films like Warhorse, Gladiator and TV series Free Rein and Outlander. 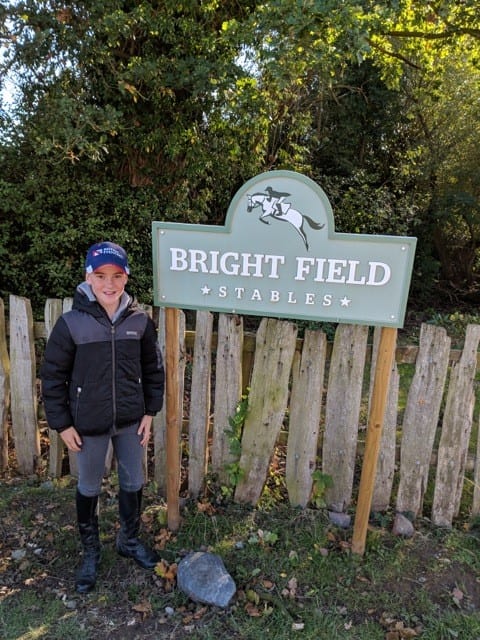 After a brief introduction to everyone, I had my riding assessment, guess they had to make sure I was good enough for the job! This was assessed by the horse-master, Hernann, who gave me the all clear J. It was quite cool that for my assessment, I got to ride Benji, who is ‘Bob the cob’ in the series and a very popular horse in the series. After this, we had time to go and meet the horse that I would be riding, called Harry, down at the stables. He was a great pony, 14hh. After a night in the hotel, we had a 6am alarm call as we had to be down at Unit base – where all the costume, makeup, catering and technical teams are based – by 7am! After a slap up breakfast on the double-decker bus that serves as a restaurant on set, I got kitted out in my costume – a cowboy outfit – which was pretty funny but I didn’t really mind if that was what they wanted me to wear, well, no problem. 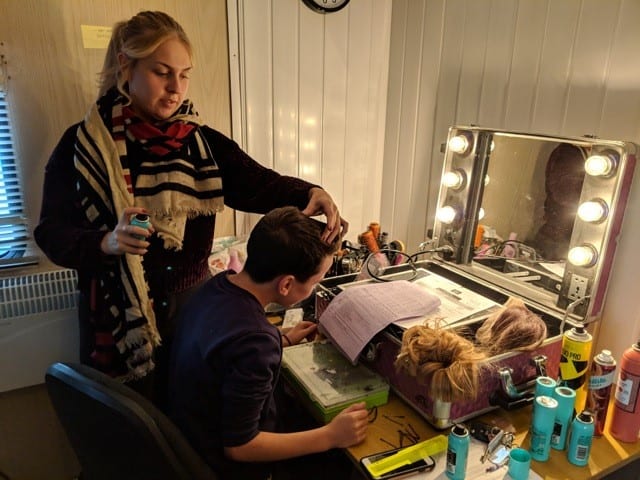 The day on set was long and they didn’t call me for my scenes in the morning, but we got to watch loads of other scenes being filmed with the horses and stunt riders doing their thing. ‘Raven’, who is the star of the show and ridden by Zoe (played by Jaylen Barron) is a beautiful horse and he can rear on command and lie down and do all sorts of cool stuff. I met all of them and got to chat with the actors too, which was really interesting. In the end, that first day of filming, they ran out of time to film my riding scenes, but the good news was it meant a recall a few weeks later and I got to go again and do them then. 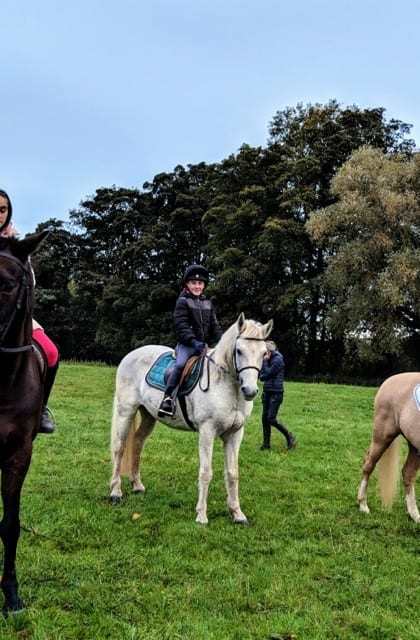 For my second visit to the set, I went straight down to film my main scenes, which involved me riding Harry, in a group of other riders and cantering away from the camera, then galloping off into the distance in front of this really cool country house. We had to do it several times for the director and Harry got quite excited by the last gallop! Then we had to film several shots where we cantered towards the camera. It was lots of stopping and starting, and then doing it again and it made me realize how good and patient the horses are. 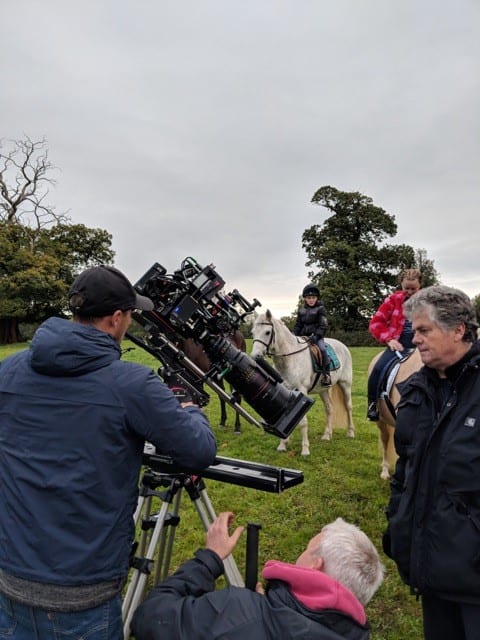 The other stunt riders were really nice to me when I was feeling nervous and some of them told me they had worked on different films like Star Wars, Outlander, Pride & Prejudice and Game of Thrones. It made me realize that a career as a stunt rider might be a pretty cool thing to do for a job when I’m older. 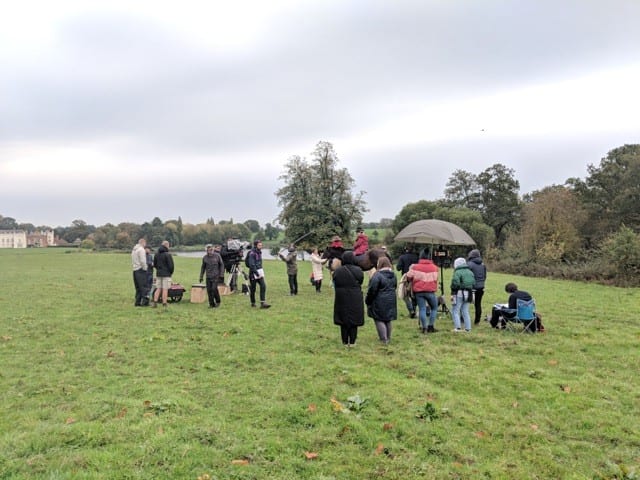 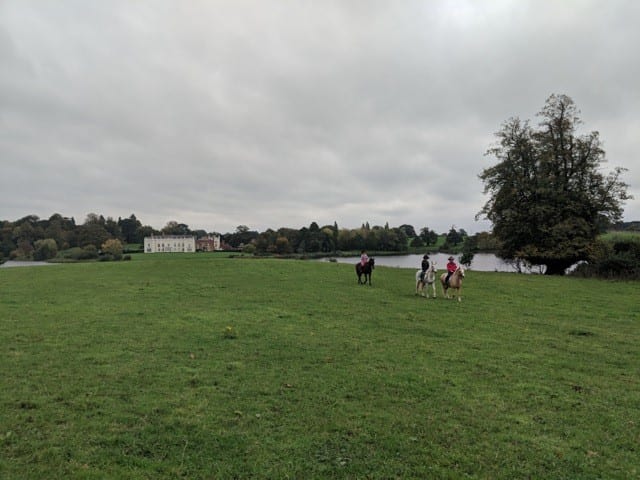 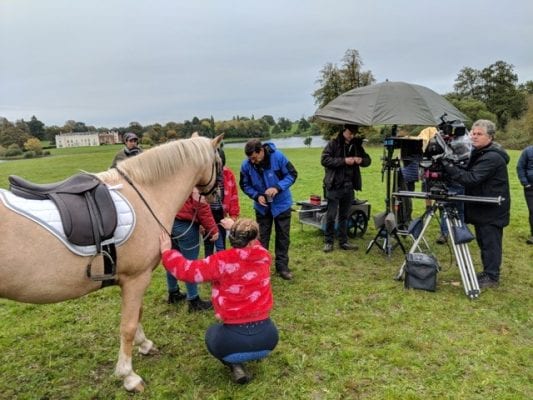