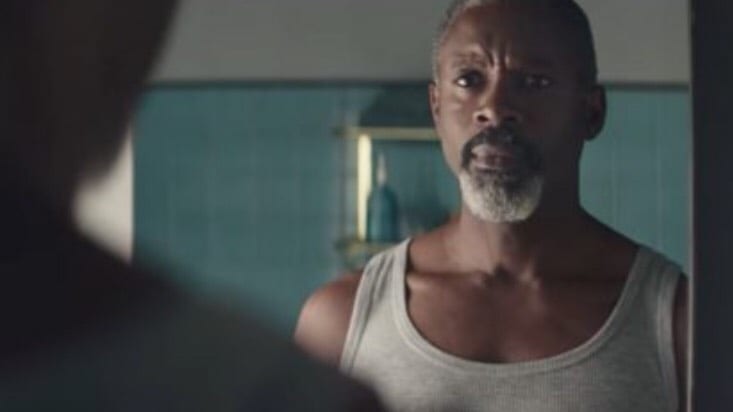 The razor brand, Gillette, has been bombarded with both criticism and praise after their recent video advertisement: “We Believe”. The recent engagement with the ad from celebrities, politicians and the everyday public has caused it to make waves way beyond its target market.

The change in Gillette’s 30 year old tag line from “the best a man can get” to “the best men can be” highlights their active engagement in helping to create a new, radically egalitarian society by calling for men to be held “accountable”.

The 90 second TV ad references hotly discussed themes such as ‘toxic masculinity’ and the #metoo movement through scenes of sexual harassment, bullying, objectification and mansplaining.

Gillette puts specific emphasis on the phrase “boys will be boys”, arguing that this is simply condoning toxic male behaviour. This phrase, throughout time, has been used to excuse boys and men from facing any kind of consequence for their actions as it is ‘in their nature’; a concept Gillette believes is a huge contributor to ‘toxic masculinity’.

But why is it that Gillette is coming under such harsh criticism for an ad that was made to try and make the world a better place? Many people argue that men are simply “angry” for being told that they aren’t perfect or that they are feeling threatened that the world around them is really changing. But could it be more than that?

The biggest claim is that the ad “emasculates men” (deprives them of their identity). However, ‘masculinity’ is a huge part of their brand; Gillette are not trying to discourage it, merely distinguish between ‘masculinity’ and ‘toxic masculinity’.

Furthermore, many men (and some women) took to social media to explain the unfair nature of the videos accusations towards men, whilst it never once looks at the problematic actions of women. However, Gillette is a razor brand predominantly targeted at men, meaning the majority of their products aren’t designed for women and so naturally their advertising is targeted at men. What Gillette is not saying in this ad is that women are perfect. Incidents such as sexual harassment, bullying and objectification can still stem from a woman, which equally is not acceptable.

Instead of looking at this advert as a negative ‘telling-off’, what Gillette are trying to do is make the world a better place by acting as a catalyst for change. The ad itself says: “we believe in the best in men”. This uplifting statement should inspire men to reject the ‘toxic masculinity’ that is so heavily pushed upon them and show the traits of those men who were shown to already be making a difference. 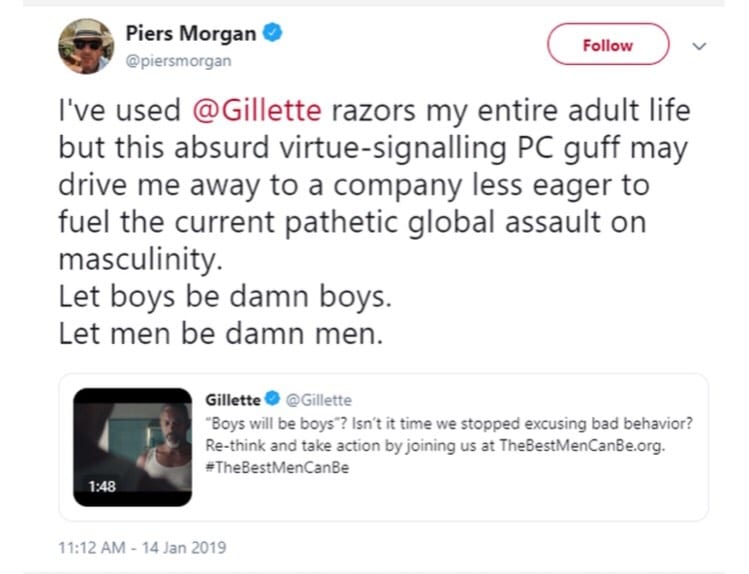 It is possible to write this tweet off as “classic Piers Morgan”, but the backlash of this video shown in tweets such as this shows just how reluctant people are to accept that the world is changing. 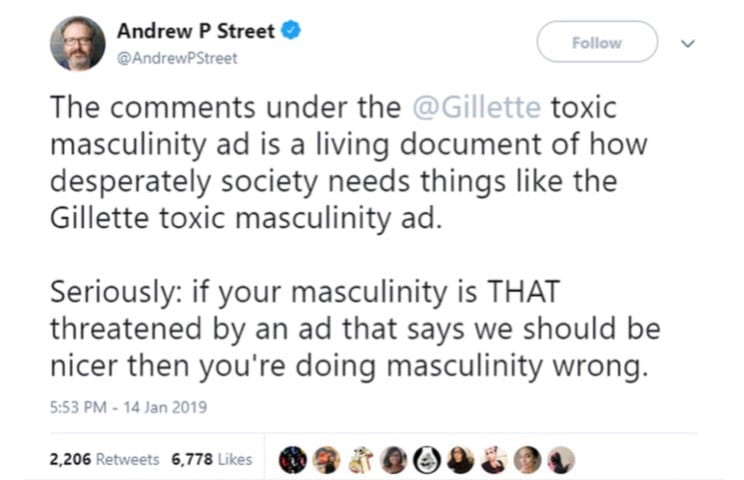 The ad, posted onto Youtube by Gillette, currently has 549,000 likes with over 1 million thumbs down. These figures show a clear representation of how widely this video has been for its somewhat controversial message. However, the negative response shows the necessity for this video as their are many people still defending ‘toxic masculinity’ or mocking the ‘metoo’ movement.

Whether you agree or disagree with the message of this ad, it has shed light upon an important topic that will undoubtedly continue to be discussed as our society evolves. 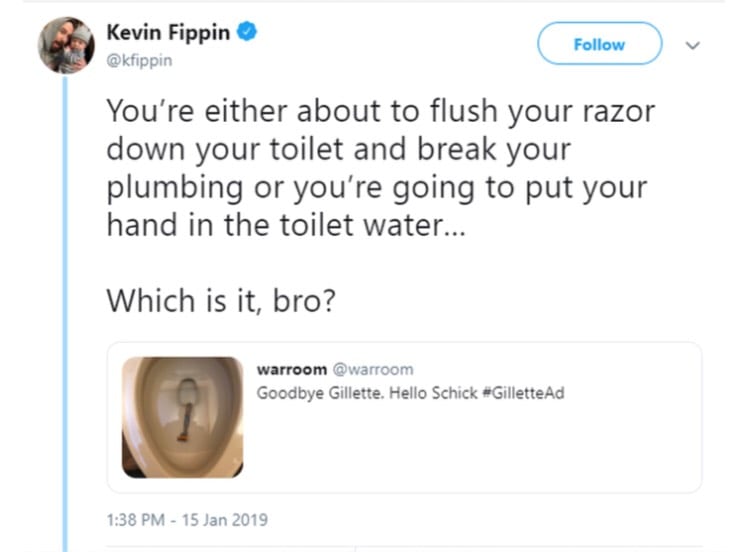