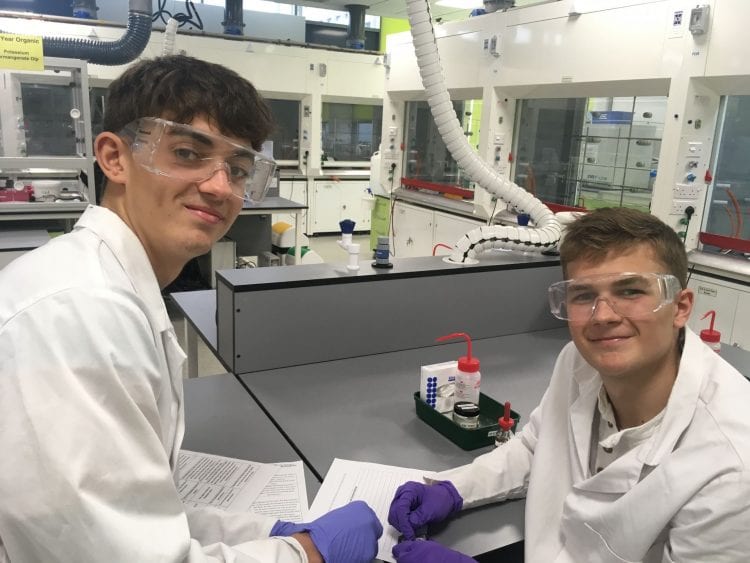 On the Monday before half term, both Stamford School Year 13 A Level Chemistry sets visited the University of Nottingham for an afternoon of analytical chemistry.

In our A Level course we learn about three analytical techniques: Infrared Spectroscopy (IR), Mass Spectrometry (MS) and Nuclear Magnetic Resonance Spectroscopy (NMR). In school, we learn the theory and how to evaluate results but due to very high costs of equipment we are unable to do any hands-on practical work. However, universities use government grants and industrial sponsorship to invest in these precision, expensive machines for both cutting-edge research and undergraduate studies.

As a result we were invited to spend the afternoon at the University of Nottingham to get to use these machines first hand. We were greeted by Samantha Tang, the coordinator for our trip, and she introduced herself and presented our timetable. Firstly, we would do IR Spectroscopy, then Mass Spectrometry then finally NMR, and we would combine all our results to work out what unknown compound we were analysing. 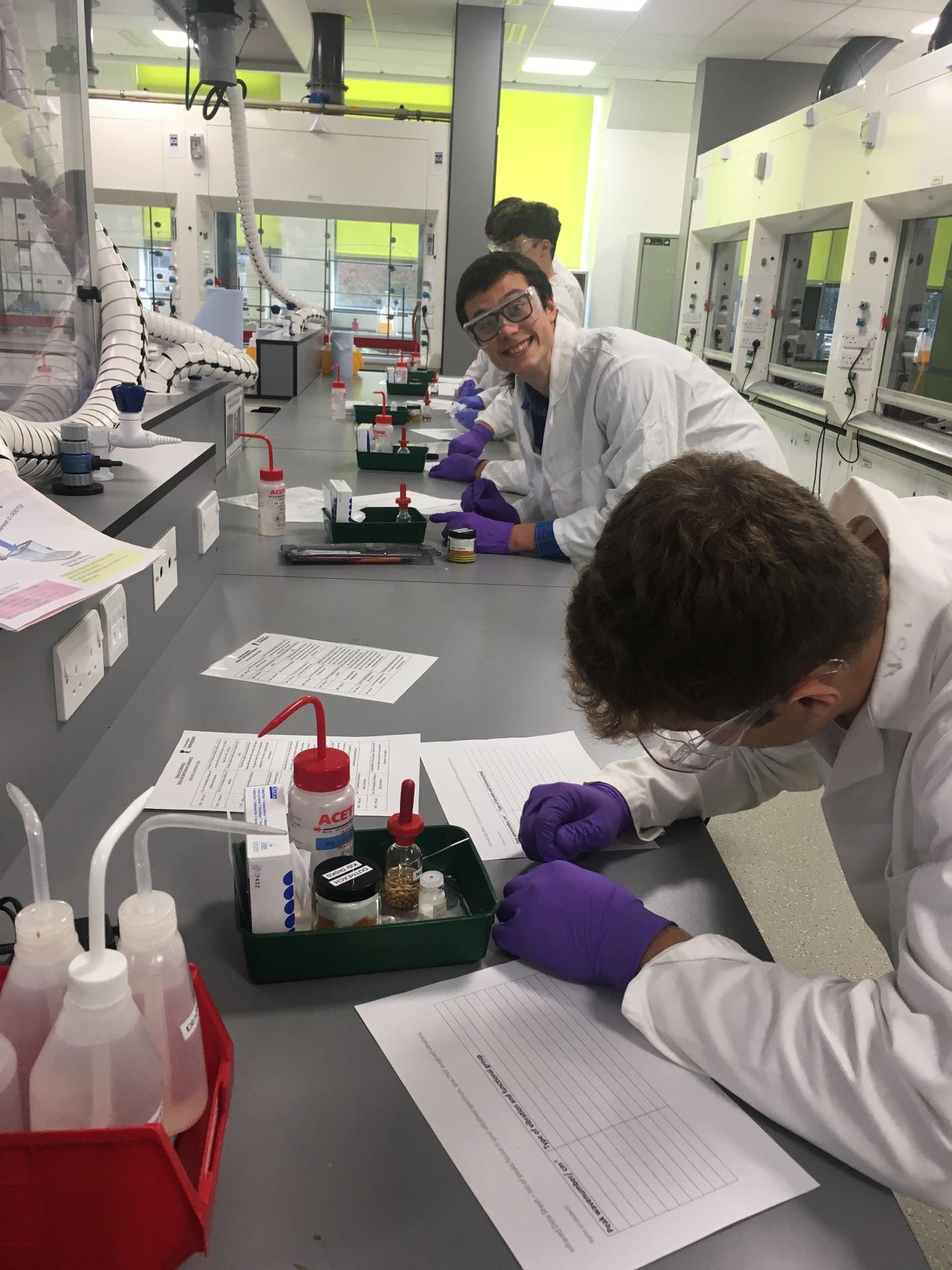 IR Spectroscopy works by firing infra-red radiation at an organic compound and measuring how much it absorbs certain wavelengths of the radiation. Certain collections of specific atoms, called groups, absorb specific wavelengths of the radiation in their bonds to start vibrating. This is shown graphically as a dip, also (confusingly!) known as a peak. When these peaks are analysed at certain wavelengths we started to understand what functional groups our unknown compound has. We quickly discovered our compound had a carboxylic acid and an ester group. The university had around four of these machines, each one costing around £15,000. 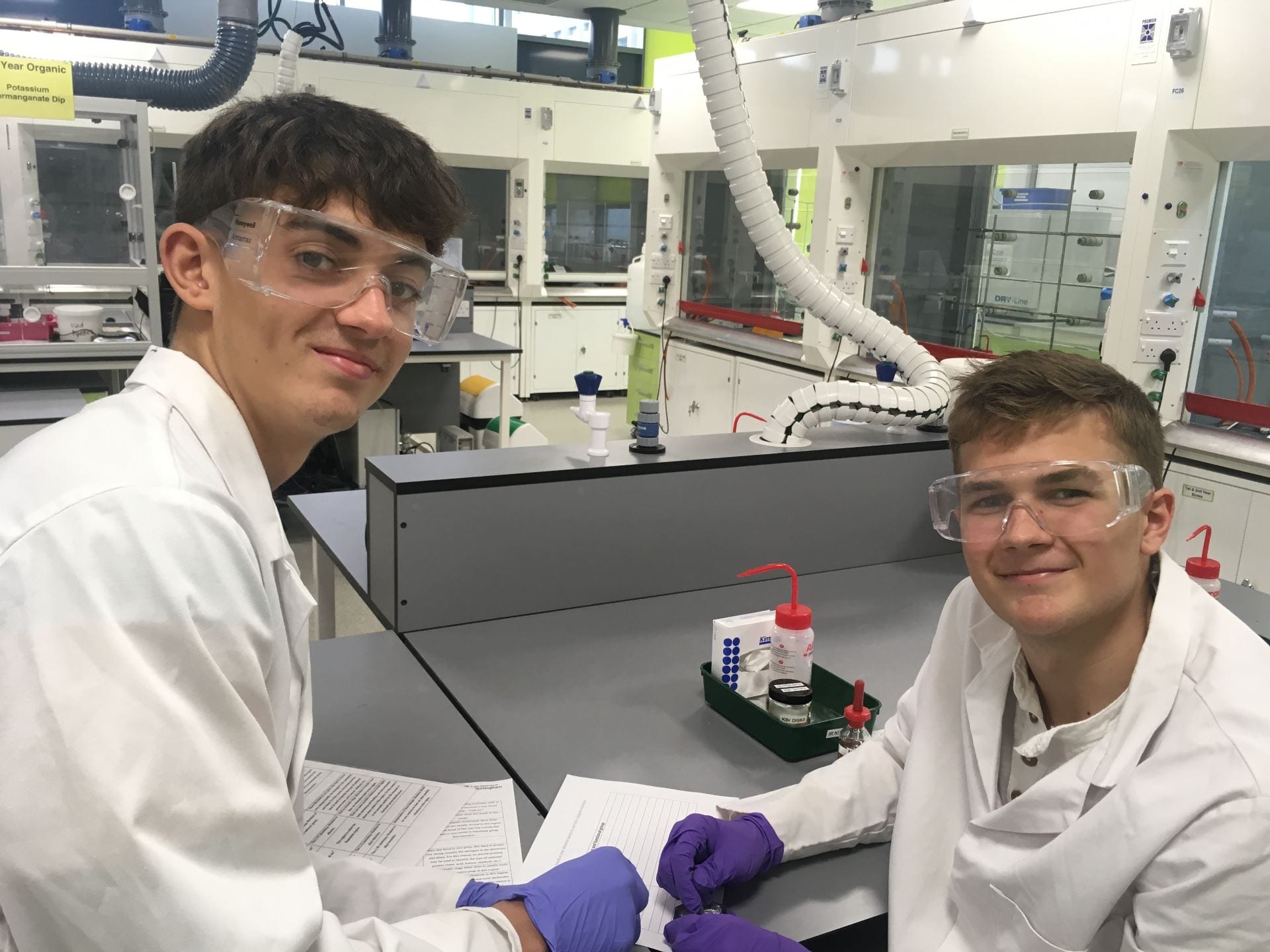 Next, we moved on to mass spectrometry; this technique uses machines to calculate the total mass of the molecule it analyses. It does this by firstly ionising the compound by firing electrons at it from an electron ‘gun’; these ions are then guided through an electromagnet. When the electrons hit the compound, they often break it into smaller fragments of different sizes. When these are sent into a magnetic field, the smaller fragments travel faster, so spend less time in the field and are therefore deflected less by the magnetic field; the opposite occurs for larger, heavier fragments. These fragments are picked up at different points of a detector, and using some mathematics, the data can be transformed into graphical form which can show the relative masses and charges of these fragments. From this analysis we can see the relative mass of the compound as a molecule and some of its more stable fragments. This showed that our unknown molecule had a relative mass of 180. We also looked at the mass spectrum of air, and compared the mass spectrum of inhaled and exhaled air which clearly showed how oxygen was used up and carbon dioxide was produced by a respiring organism (in this case, a willing volunteer sixth former). These machines were very expensive, ranging from £50,000 to £200,000 and also require careful maintenance. 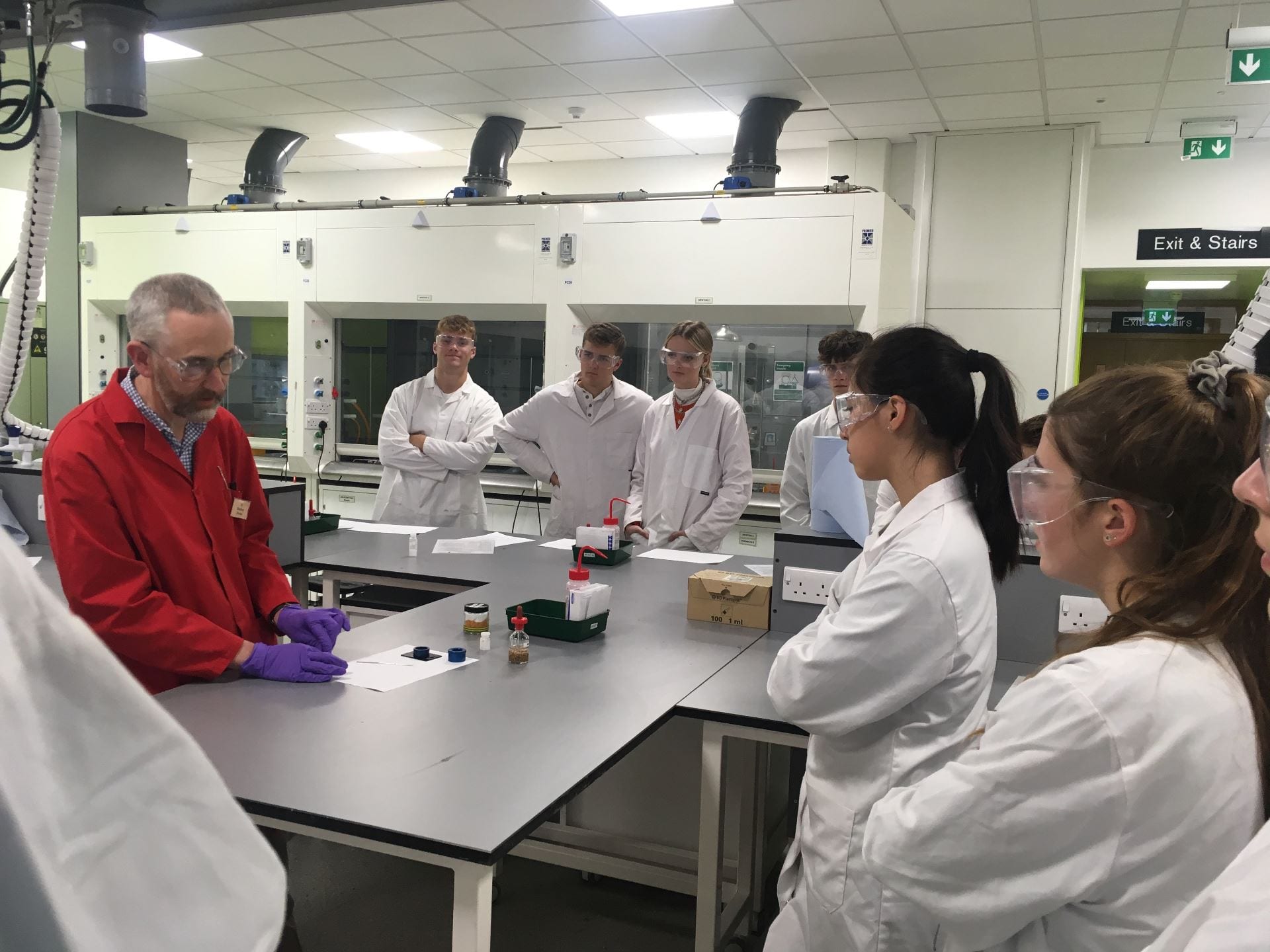 The final technique we used helped bring all our data together and let us identify our compound. NMR spectroscopy uses the principle that as atomic nuclei are charged and have a property called spin, then they produced their own small magnetic field. When a chemical sample is placed in a strong electromagnetic field, the magnetic field of the nucleus can align either with or against the applied magnetic field. A state of flipping between the two possibilities is called ‘nuclear magnetic resonance’. The reason NMR is such a powerful tool for organic chemists is that different types of hydrogen atoms in different functional groups or parts of a chemical compound resonate at different energies – this allows us to gain a huge amount of information about the type, number and environment of hydrogen atoms in a molecule.

Because the NMR machines need to generate such a strong magnetic field, they use superconducting electromagnets. It was amazing to see that the electromagnets have an outer core, cooled by liquid nitrogen at -196 C, shielding an inner core which is cooled by liquid helium to an incredible -269 C, only 4 degrees above the lowest possible temperature of absolute zero. The coolant liquids are replaced every six months at considerable expense.

The instrumentation is incredibly expensive and requires careful maintenance to work properly. The total value for these machines is well over £500,000. The intense magnetic fields involved also mean that people fitted with pacemakers cannot work near the machines. They have also been known to stop the hands on analogue watches, and to erase credit card data.

Our final piece of data in our chemical jigsaw allowed us to tie all our data together and as a result we discovered our compound was aspirin, the common analgesic.

This trip allowed us a great opportunity to understand A level spectroscopic analysis, and also gave us a taste of what is involved in undergraduate chemistry degrees and the sort of instrumentation used in chemical research. Thank you to Dr Jones and Dr Smart for arranging the outing.