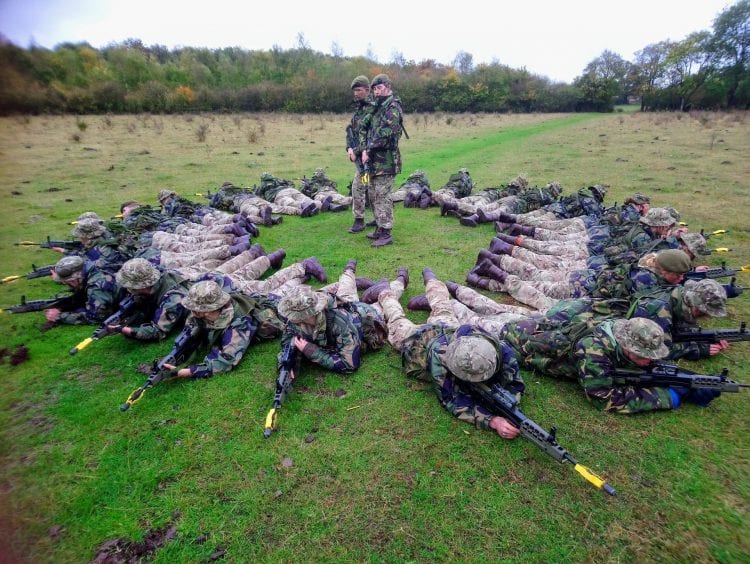 On the 14th & 15th October 2018, The Senior Army cadets conducted manoeuvres on Yardley Chase Training Area, Northamptonshire, a one time formal parkland, then ammunition depot, ultimately a Site of Special Scientific Interest and training area. Persistent heavy rain had been booked using Army Form 57643B/4578, as every cadet knows, ‘If it ain’t raining, it ain’t training’. 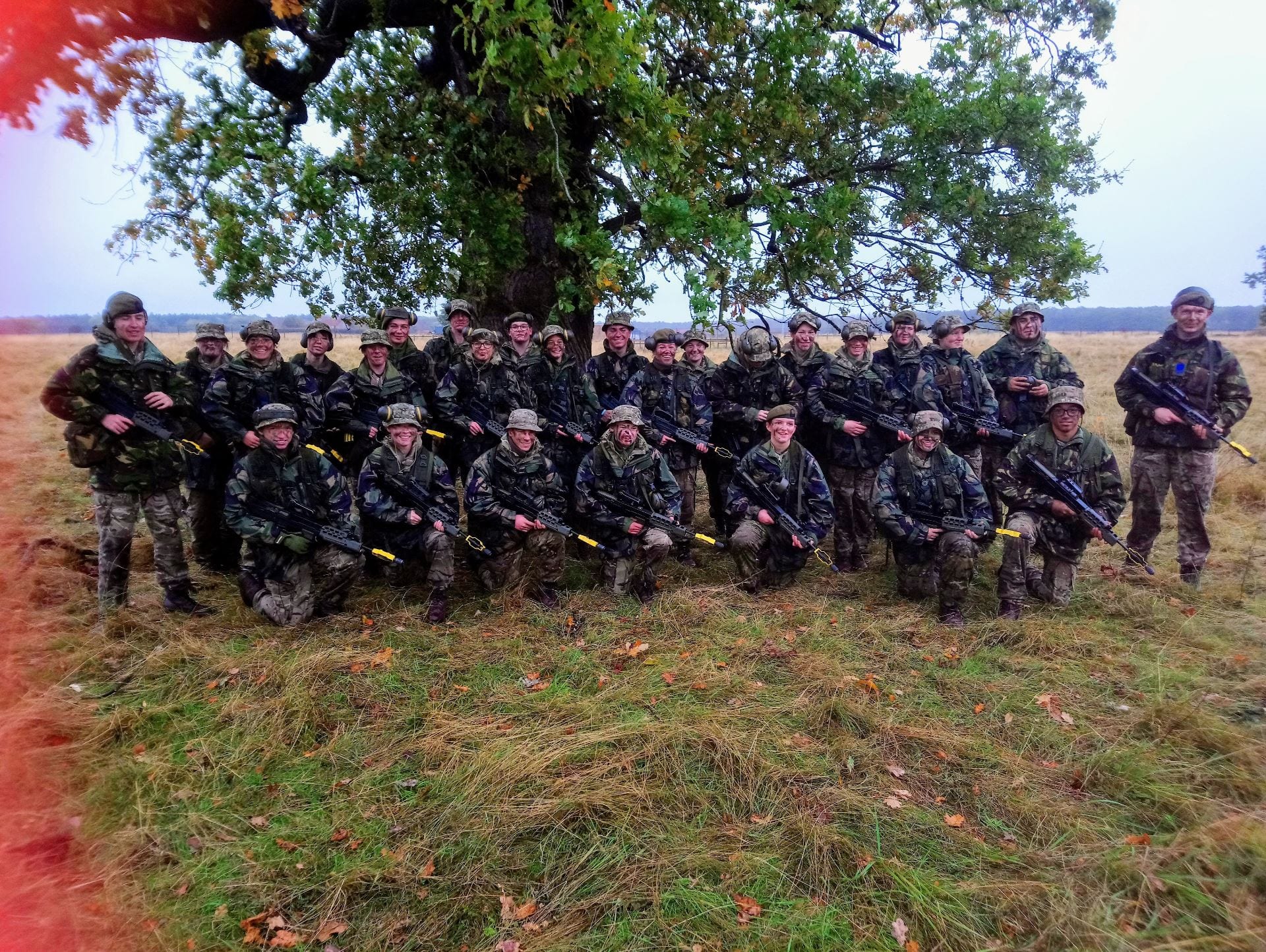 This led to staff deciding to allow the cadets to use a hangar for a patrol base as the proposed harbour area as the conditions would make it exceedingly difficult for the cadets to administer themselves, which would detract from the main effort of the exercise. 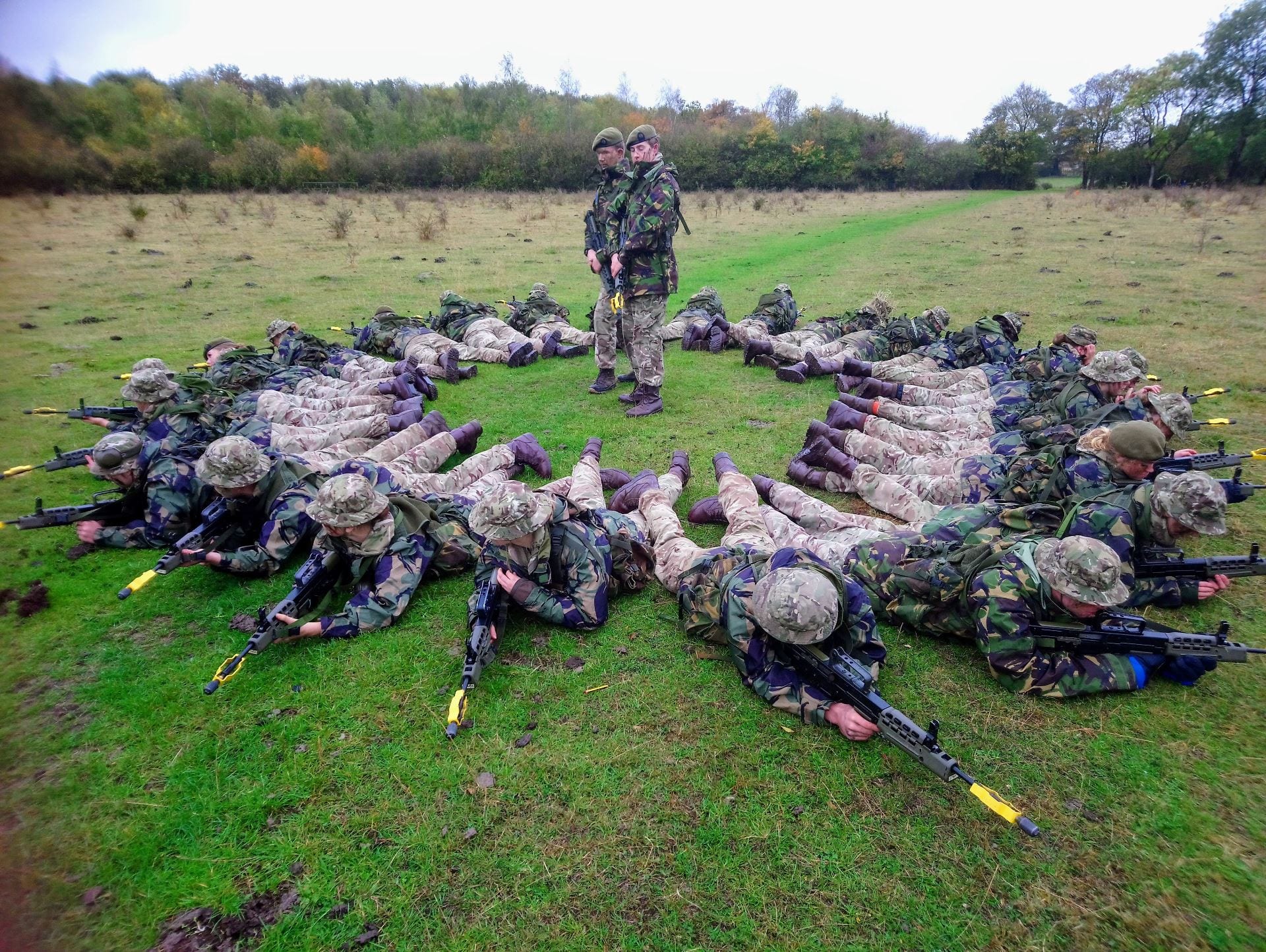 Cadet CSM Sam Brunswick proved himself to be a most capable platoon commander, assisted by Cadet CSgt Brandon Crozier. Section command posts were rotated throughout the exercise to provide opportunities for more cadets to develop their leadership skills. 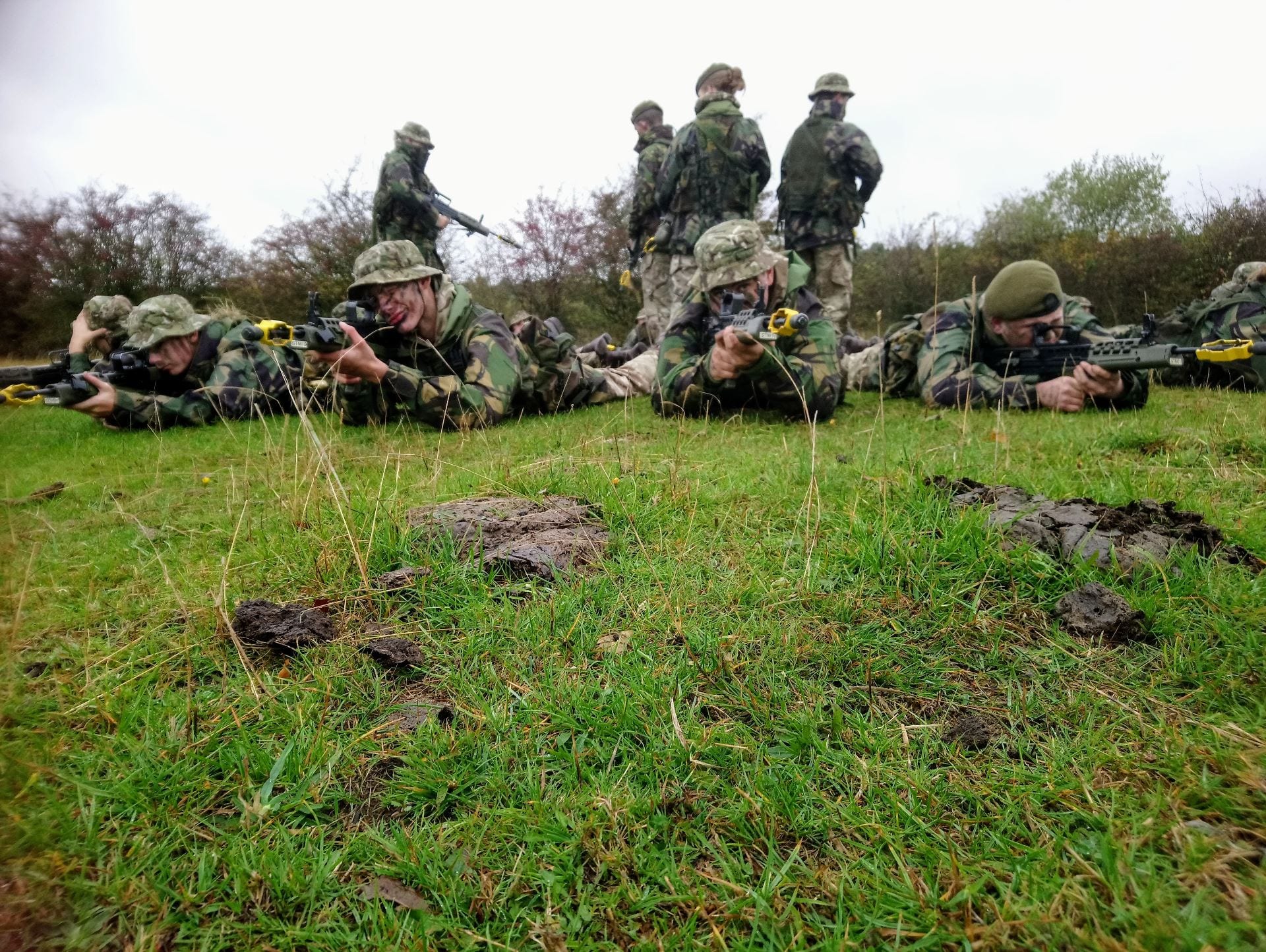 Each section conducted reconnaissance patrols to gain intelligence on the ground and identify signs of enemy activity; this tested their navigation and patrol skills, both of which were conducted to a good standard, despite the weather. The accumulated intelligence from the patrol reports set plans afoot for an ambush, for which battle preparation and rehearsals were conducted. An excellent set of orders, using a detailed model of the area, were delivered by the platoon commander. 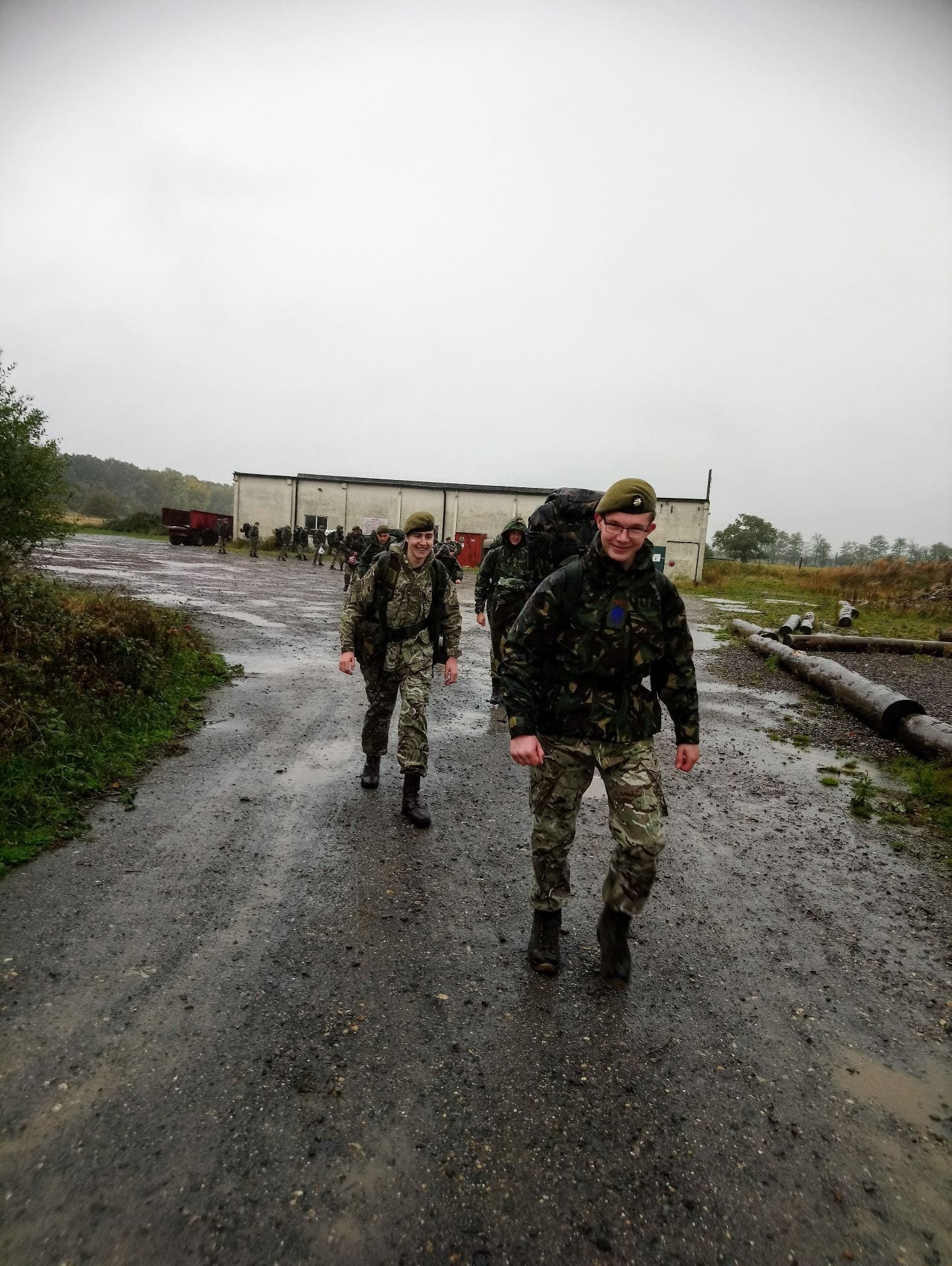 The platoon demonstrated excellent skills again in this complex phase of the exercise, communication well using hand signals and ensuring information was passed up and down the patrol. By this stage, they were improving their stealth, moving silently through the rendezvous points along the route. 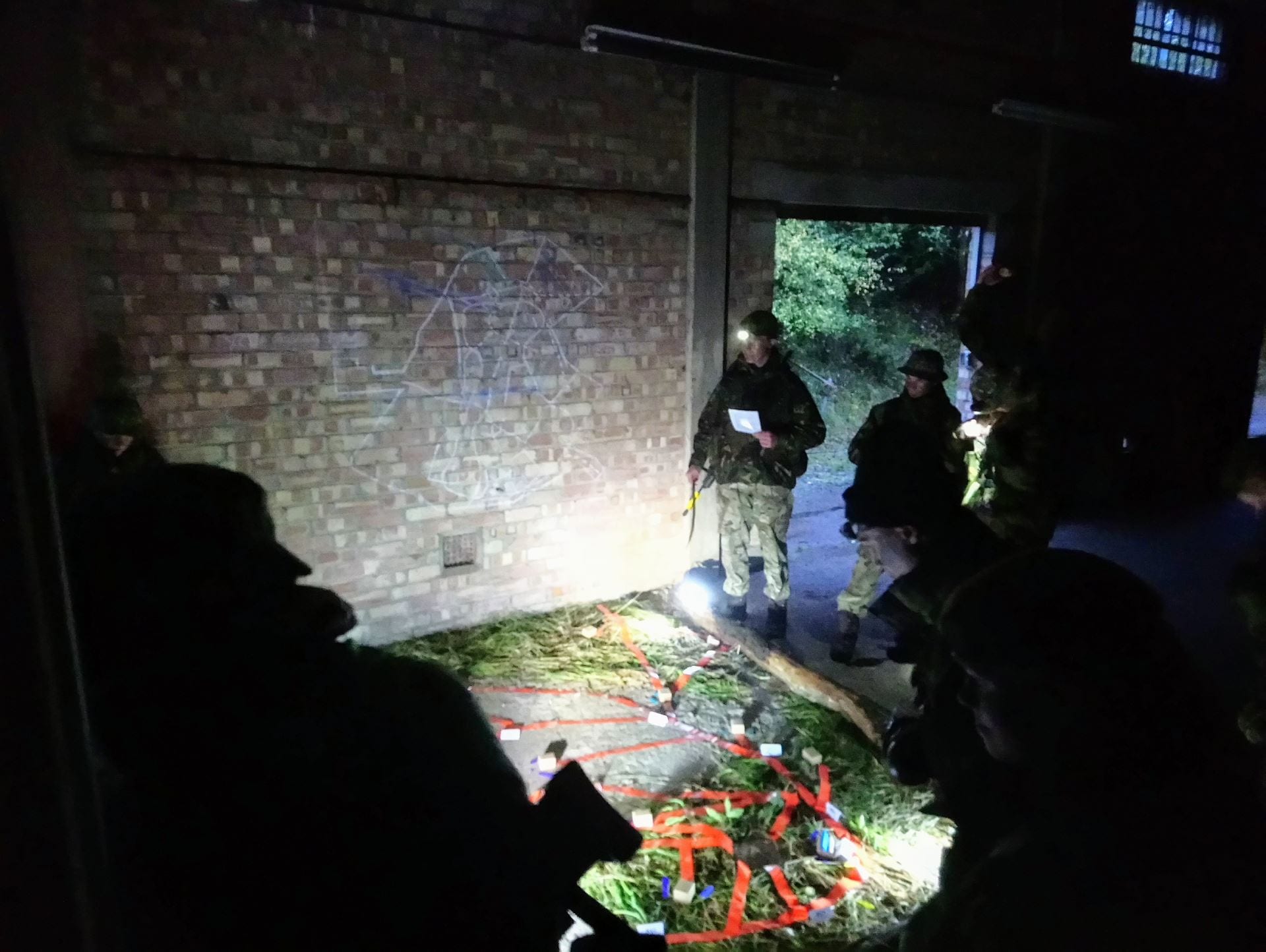 Insertion into the Final Rendezvous (FRV) was done most efficiently and the recce party went forward to make final checks and mark the positions of the cut-off groups and killing group. A moment of eagerness nearly led to confusion as the main party got up to move into the ambush site, but quick-witted thinking by the platoon sergeant and his subordinate commanders had the situation under control and the patrol occupied the ambush site with minimal noise. Once the ambush was ‘set’, patience and self-discipline of the cadets was tested to the extreme as they lay in wait for the enemy; the discomfort of earlier rain dripping down from the canopy whilst waiting in the dark certainly focuses the mind; there was little to no chance of any cadet falling asleep on this ambush!

A furious reaction to the appearance of the enemy saw the delivery of a heavy weight of fire; after the enemy had fell, the cut-off groups dispatched those who tried to flee. Once done, withdrawal from the ambush site was swift and well conducted; after a head count in the FRV, the patrol returned to base by a different route, though the excitement of their action and tiredness saw in drop in communication and increase in noise, a common problem which the cadets must learn to overcome

After a hot brew, tales of heroism and derring-doo were duly exchanged with much excitement and appropriate exaggeration. The cadets finally settled to sleep after the option of setting up bashas in the (very wet) woods was presented to them. They made a wise choice as the rain intensified overnight.

Reveille arrived with a crescendo of activity and excited chatter which flowed seamlessly from my dream about being a farmer of battery chickens. Breakfast was being devoured when the news of enemy activity came in; a warning order was issued and the sections prepared themselves for further action. Rehearsals of section battle drills followed and soon the battle-hardened cadets were ready for further action.

Each section cleared an enemy position in turn; the enemy had chosen positions which tested the leadership of commanders; some sections struggled to locate the enemy positions accurately until they broke cover but the section commanders, Lauren Watkiss, Charlie Foster and Ben Wilson gained valuable experience in preparation for the Senior Cadet Instructors Course over half term.

The sections successfully destroyed the remaining pockets of enemy, conveniently by lunchtime. Throughout the post exercise administration, the cadets continued to work hard, cleaning weapons, packing kit and ensuring that on their return all paraphernalia associated with the exercise was stowed correctly and efficiently.

All cadets on the exercise learnt much in rather unpleasant conditions; I would like to thank them for their hard work and excellent camaraderie and the Army section staff for their ever-diligent assistance in enabling this exercise to happen.