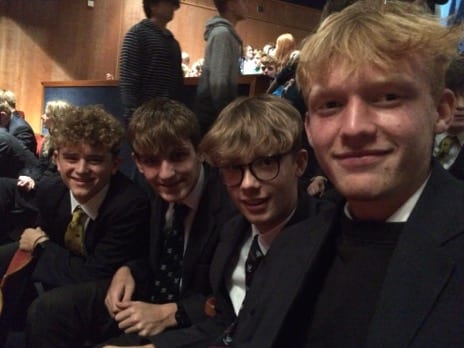 On Tuesday 25thSeptember, a group of English literature students from years 10 and 11 travelled to Cambridge to see J.B. Priestley’s An Inspector Calls. To see the play on stage as opposed to on paper is vitally important for a student’s understanding, and this excellent production surpassed all its expectations.

That was the second time I had seen this production of the play, and its attention to detail still shone through. One of the more cryptic features of the play was the wretched-looking children on stage along with the major actors. They could be seen at various parts of the play fighting among themselves, peacefully watching the action and begging for help from the characters. I particularly remembered the Inspector giving some change to a boy just before entering the Birling’s home, which is in line with the play’s message about helping other members of society; and Sheila giving her silk gloves away about halfway through the play. The older Birlings, however, did not help the children (whom I believe to represent the general public).

The production even illustrated the difference between the generation in their attitudes to Edna, the maid. Mr and Mrs Birling were seen again and again getting aggravated at her, and I don’t remember ever noticing them thanking her. On the other hand, the Inspector, Sheila and Eric were seen having conversations with Edna and thanking her while they weren’t the centre of attention. This is part of Priestley’s message about socialism as Edna represented the ignored members of society who work to support the upper classes. The older generation ignored their work and largely appeared ungrateful whereas the younger generation appreciated and helped them.

Most of the setting consisted of a house with one room and a door leading offstage. The front walls of the house opened up outwards to reveal the inside when the Inspector arrived, representing that the Birling’s secrets had been discovered. Later on in the play, after the Inspector leaves, the house is damaged and partially collapses and debris is left over the stage. Although no actual reason is given for this, it’s obvious that this represents the Birlings’ way of life collapsing after the Inspector undermined it.

This is a hugely entertaining production of the play, and I recommend it strongly. As well as being useful for studying the text, it made for a good night out.