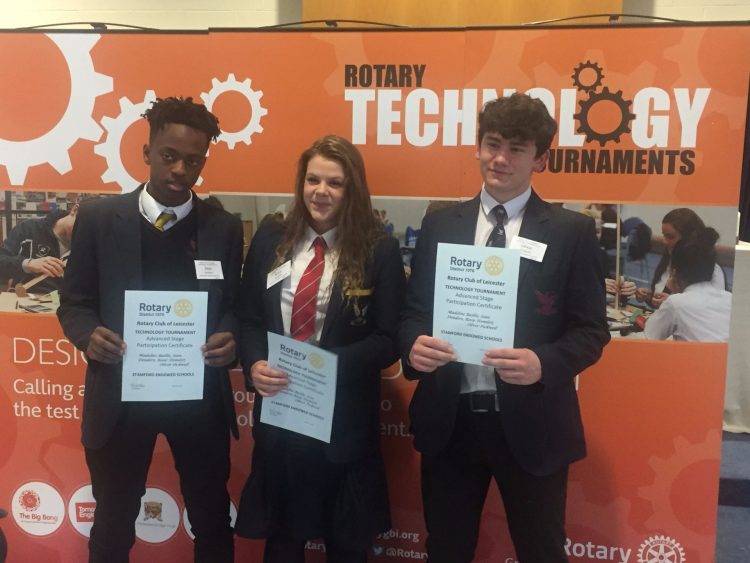 We arrived at Leicester grammar for a 9:30 start. After a short briefing, the two teams of Sean/Rosie/Ollie and Patsy/Bertie/Eduard/Holly opened their packs to begin the designing/development stage of the task.

‘Design and make a rocket launcher which fires a capsule and parachute 3m into the air, which then detach from each other and fall back to earth separately’.

It seemed we were in for a tough morning of thinking and testing. Available to us were 20 elastic bands, string, some wooden rods, an MDF base, screws, hooks, cardboard and a paper cup capsule with a plastic ball, and plastic sheet to act as the parachute. To make the challenge harder still, the mechanism had to be activated from a distance of at least 1 metre, and the capsule and parachute must land within that metre circle. To begin our design portfolio, we started to brainstorm the different possible firing mechanisms; the way the mechanism would be contained and held; the options for attaching the capsule to the mechanism, and the best way to get the maximum tension from the elastic bands. Through developing each idea, we concluded that we would have a triangular base for maximum strength and rigidity, the container would rise 30cm into the air to get maximum strength and tension from the elastic bands, and we would use a pin system to release the bands which fire the capsule into the air. Having recorded every stage of our development in a portfolio, we were on to the build.

Whilst Eduard finished our technical drawing, Bertie began working on his unique pin mechanism. He sawed off the end of a metal hook, cut a rod of wood and then drilled a hole into the side of it. He then screwed this wood to the MDF base and tied a metre length of string to the thread on his metal pin. Simultaneously, Patsy busied herself with the technical design of the parachute, having made a wire ring she used the hot glue gun to attach the plastic sheet to it, and then string to the ball and the wire. Her theory being that when the capsule fired vertically upwards, as it came down the air would fill the parachute and split it from the capsule as they both fell back to earth. Holly and Eduard then measured and cut 30 cm wooden rods, and then glued these onto the marks of the triangle which Holly had marked out onto the base. To reinforce this, they cut out triangular cardboard pieces and glued these at the bases of the rods to increase strength and rigidity. After finishing the structure, they attached 3 hooks to each of the 3 corners at the top. They then looped 6 elastic bands onto each and tied them together in the middle with a loop of string, and pulled this down to the pin, hooking it on. The contraption was ready for its ammunition. The team took the launcher to the advanced launching pad, put everything in place and stood back. Holly pulled the string holding the pin in place which released the rubber bands firing the capsule upwards past the 3-metre mark! Success.

Having worked through lunch with the rest of the teams, after extensive testing and some different adaptions, they stuck with the original model for the final test. Now up against the other schools, and the team of Ollie/Rosie/Sean, they had to watch in a tense silence as each team’s launcher – from the junior/ intermediate/advanced groups – was tested. After the final tests, the judges came together and added up the marks from each section. The two Stamford teams sat together and waited for the results to be announced, during the long wait both teams had their launchers taken to be discussed. We then found out that we had drawn and they were deciding between 1st and 2nd! The results were ready to be announced and we went back to our own tables to see who had come out on top.

The winners of the Advanced Level Competition were Ollie Pickwell, Rosie Tremlett and Sean Dendere; with looks of disbelief they went up to receive their glass trophy, and have their photo taken. Smiling, they walked back to join the runners up – Holly Farrow, Eduard Kusnir, Bertie Burges-Lumsden and Patsy Brake – with a very chuffed Mr Newton (unable to decide which was the bigger triumph – winning, or beating Oakham)! 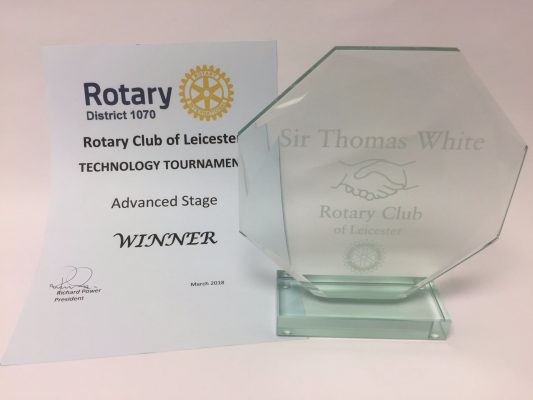 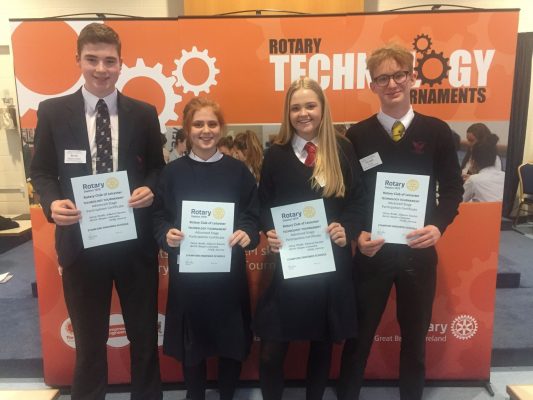 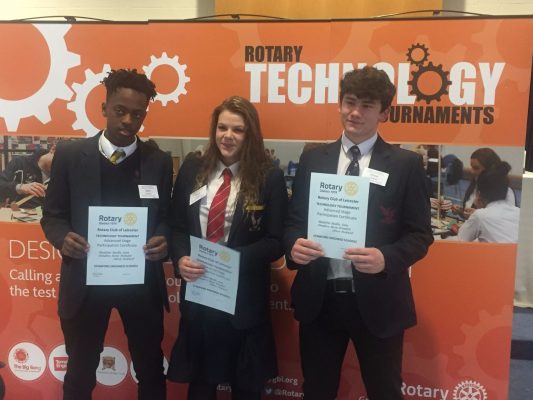