On 16 January our team of Jonty Mason, Jacob Worthington, and Melissa van der Maat went on the long journey up to the University of Nottingham to compete in the East Midlands round of the Royal Society of Chemistry’s Schools Analyst Competition.  After a rigorous selection process (test) we buckled up and made our way to Nottingham along with lab coats, goggles and an accompanying SHS team intact.

We drove into a packed car park deep in ‘The Science City’ of Nottingham University which to some may seem a daunting prospect, as the mini buses from the likes of Oakham School and King’s Grammar rolled in.  After a brief interlude of getting lost in the mass of buildings we arrived at the chemistry block.  We waited on the first floor to be greeted by a swarm of almost 20 teams and a shouty lady who appeared to be running the competition.  Then after surveying the opposition and observing the interesting and expensive spectroscopy equipment, hidden behind glass, we were shown upstairs to where the labs were. 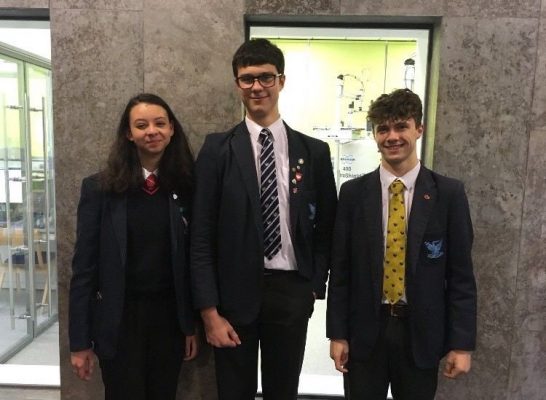 After a safety brief, our team, with goggles and coats donned, entered the lab. It was full of the most amazing equipment with fume cupboards running all along the walls and intricate glassware laid on the middle island. The shouting voice of the organiser gave us another few brief words as we got to our separate stations over a comms system and then we got to the actual competing. In front of us were a few small sampling units filled with white crystalline salts and some indicators, behind us was a fume cupboard with splints dipped in mystery solutions like joss-sticks, and a Bunsen burner. Interestingly we also had a kit for IR spectroscopy sampling, which with a school budget isn’t possible so it provided great fun to be able to use.

Once we had unscrambled the instructions of what turned out to be a murder mystery we set out deciding what different roles we would each play and then carefully got on with the work. We were there for three hours taking multiple anion and cation tests, flame tests and infra-red (IR) tests; in the meantime, we were being observed under the watchful eye of the judges who were trying their best to make sure none of the teams broke any of the expensive equipment that they were allowing us to use. They were also judging us on areas such as our safety and and teamwork. Unfortunately, between the teams we broke 17 little discs made of potassium bromide each costing around £40 (whoops) but it was a good experience none the less.  The workbook was what we found most difficult as we had to interpret the results of every test, partially solve the crime that was committed and work out what was happening with the various people involved in the crime, based from the results from four salts and a bit of a back story. It was especially hard to understand the IR results as we have never worked on these before and it was definitely a steep learning curve.  But it was an amazing opportunity to do something which wasn’t possible in school and we persevered to work it out.

Once the three hours were up we were told to put down our work, hand in the workbook and that was the end of our day. It was fair to say we were not confident of our answers!  On conferring with the SHS team, it seemed we had both got different results and this would determine whether we had spent the last half a day in vain! Even better was the fact that we were stuck in a traffic jam on the Nottingham ring road for an hour, so we had a lot of time (too much time?) to dwell on our results.

The pessimistic view of the team may have annoyed Dr Jones a little bit on the way back as he was eager and raring to hear good news.  Luckily for us that came a week later once the work had been assessed.  We had come first!  On top of that, each of us got a £30 Amazon voucher, not bad for half a day’s work, and the chemistry department got a cash prize too.  This leads us to a very exciting opportunity, in June we will be going to the national finals at the University of Bangor in Wales.  We hope for a good outcome and are determined to bring back good news for our next blog!