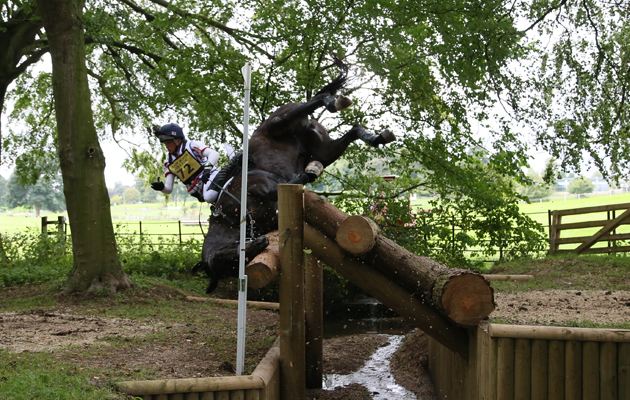 I chose to complete an EPQ as my enrichment option to support my A-Levels last year and as someone who enjoys riding and have friends who compete in eventing, I was intrigued to find out more about the sport and its associated dangers. I chose Rotational Falls.

Don’t panic, I will explain!

Eventing is an equestrian sport comprising three disciplines, dressage, cross country riding and show jumping. It is one of the most dangerous sports to participate in, since 1993 alone there have been at least 64 fatalities, with 5 riders killed in the space of 7 months in 2016. My EPQ is set out to research why it seems apparent that safety technology is constantly developing yet there is little change in the fatality rate. One of the most dangerous ways in which to fall off a horse is a rotational fall. 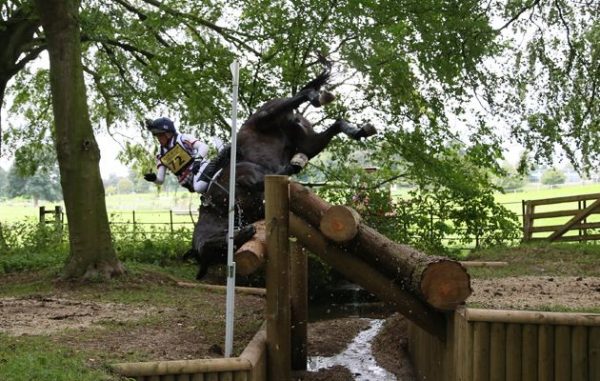 By its very nature, the demands of cross-country on both horse and rider make it the most physically testing phase of eventing and as a result, the most dangerous. It is in the XC phase of eventing that a rotational fall is most likely to occur. In 2015, there were 64,269 XC starters in UK competition (both FEI and BE competition) and 1,828 falls in the XC phase, which is a 2.84% chance of falling each time you start the XC phase,

A rotational fall is ‘when a horse hits a solid fence at its knee or above and as a result rotates over the fence’. The nature of this kind of fall means that the horse will rotate over the fence and because of the normal trajectory of the rider in a fall such as this, it is likely that the rider will be under the horse when it lands. . Rotational falls can be caused by a great variety of factors, and as such it can make it difficult to pinpoint specific causes and this is what makes them so difficult to prevent them effectively; riders at CCI**** (the top levels of the sport) are equally as likely as BE100 riders (grassroots participants) to experience a rotational fall. With horses weighing somewhere in the region of half a ton and the average speed at which riders tackle a cross country fence, the scope for severe injury or fatality does not take too much thinking to conclude upon.

To begin for my research, I spoke to a friend, Michael Collins (a pseudonym)  about course designing and its potential impacts on safety. Michael  is a professional category B course designer for BE (up to intermediate level), alongside being a professional event rider competing up to CCI****.

One of the most important things to consider when designing a course to him is to engage effectively with the standard of riding likely to be present at an event. For example, when designing a course for a location such as Shelford Manor, questions raised on the course would have to be ‘softer’ as most riders there at their later fixtures would perhaps be grassroots rider chasing qualifications for regional finals. As a result they would perhaps be willing to run even if ground conditions would not be entirely suitable for the horse for example. In addition, the standard of riding could potentially be lower, as a generalisation, as the venue itself only accommodates up to novice level, this must be reflected in the course design to ensure it is safe whilst remaining competitive.

Terrain also plays a big part in the course design, a course such as Little Downham, which is in the Cambridgeshire fens, is very, very flat and as a result the course design should be far more varied and ‘wacky’ to be of a similar standard to courses of the same level elsewhere. Courses such as Bramham, Yorkshire, however, which have very hilly, varied terrain would require far less variety in fences but more consideration of location of fences in order to maintain challenge without compromising safety. Certain fences and combinations are only safe in certain locations, naturally found terrain such as hills; drops and water must be safely incorporated into course design to maintain the element of thrill again without compromising safety. Courses should also take into consideration horses fitness levels and allow them to find their ‘second wind’, they should have intense periods where combination fences and technical lines appear and they should be interspersed with easier, softer periods to allow for sections of recovery and enable combinations to finish in a positive light so that both horse and rider can continue their education. 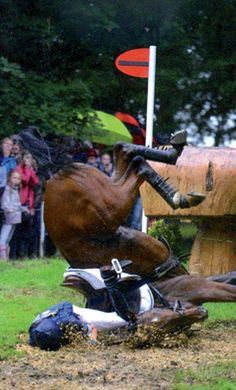 The final aspect Angus spoke of was the use of mechanical devices such as frangible pins and MIM clips. Both are leading innovations that have improved the safety of eventing by providing in some respects the ‘give’ that would otherwise be only seen in show jumps. ‘A Frangible Pin is a breakable pin installed in certain cross-country jumps with the precise failure strength which allowed the rail to drop thereby stopping the horse from rotating or somersaulting. This means the horse can hit the rail fairly hard without the fence collapsing and still keep its feet, but if the critical load is reached, the pin would fail with the potential of minimizing risk of injury to both horse and rider.’ (United States Eventing Association, 2017) A MIM clip is of similar idea to the frangible pin but is a patented product and is much faster to replace and easier to determine when it is necessary to replace it than a frangible pin. Both are approved for use in both BE and FEI events. However, interestingly considering the positive connotations surrounding both devices, Angus says it is one of the last things he considers when designing a course. He would rather everything else be of higher importance and use mechanical devices as a ‘last resort’ should he still think that the question on course could pose a risk.

Fundamentally, I think that it is crucial to understand that you are almost certainly never going to be able to eliminate all rotational falls from competition but the most important challenge is to work on minimising the risk

British Eventing’s most prominent form of educational safety is potentially the implementation of Minimum Entry Requirements (MERs). These lay out specific criteria that both horse and rider individually and as a combination must complete before becoming eligible to compete at that level.

BE is showing a proactive approach to dealing with the constantly evolving nature of the danger. On the 15th March 2017, they announced that they would be trialling a system first used in Ireland under their equivalent governing body ‘Eventing Ireland’ called EquiRatings Quality Index (ERQI). EquiRatings is an Irish enterprise which is the leading data ‘crunching’ company in the equestrian world. Its ERQI is a data index which rates horse and rider combinations on a scale between 0 and 1 based on the success rates of their last runs considering a multitude of different factors. This information is currently implemented into the EI entry systems, and if the score is low enough, it prevents the entry from being made on safety grounds. Last year in EI, only 1.5% of entries were impacted upon by the restrictions but falls at CNC** (BE level Intermediate equivalent) were reduced by 66%. These 1.5% were prevented from entering on safety grounds, after potentially weak performances over longer periods of time leading up to their entries but a little change can make a huge impact on safety

The use of personal protective equipment is another advance in recent years that although does not reduce the number of rotational falls within itself, can reduce the impacts and potential injuries in the case of a fall , should one occur. For example, the rise of the air jacket by producers such as Point Two and HitAir has greatly reduced dangers associated with crush injuries typically found after a rotational. They take less than 1/100th of a second to inflate and act like airbags do in cars. They attach to the saddle with a lanyard and when the rider becomes separated from the horse, it triggers the inflation of the jacket.

In conclusion, I think it is fair to say that on the whole, both BE and the FEI have a sound plan for the future of eventing. In Ireland where they used EquiRatings first, there was a 66% decrease in rotational falls at CNC** level so it is clear to see that small changes will go a long way in making an impact for the better within the sport. I also, unfortunately, conclude that rotational falls are an inevitable part of our sport but they seem to have sufficient plans in place to contend with this through the use of MERs and such like.

Unfortunately, just last weekend a French event rider died while competing in an international event in Chateaubriant, France. Maxime Debost and his horse Qurt de Montplaisir suffered a rotational fall at fence 11 of the CCI1* cross-country course, so this remains an all too real risk.

This is an abridged version of my EPQ, but I hope it conveys the general sense of the whole topic. If anyone was interested in reading the rest of my EPQ there is a link here – ACTUAL EPQ (2)

I loved writing my EPQ, it gave me an opportunity to read further into something I am passionate about and develop my writing and referencing skills. I won’t deny however that it was probably the hardest thing I’ve ever had to do!